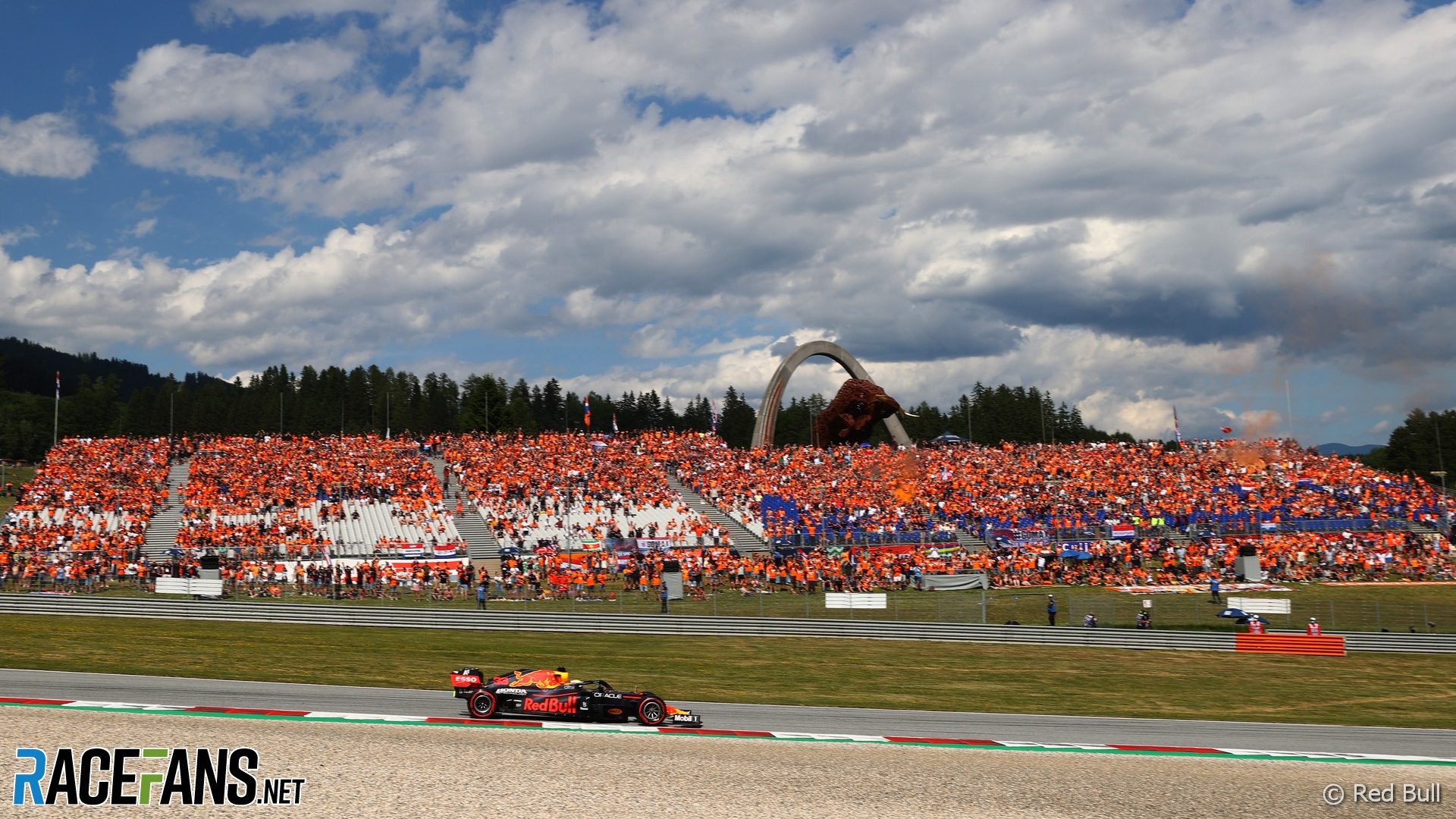 But while championship rival Lewis Hamilton was able to maintain a distance second last time around, emulating that achievement this weekend looks to be a much more challenging prospect.

Can Norris repeat his podium success from last year?

Red Bull’s joy at taking a second home pole in seven days will have been enhanced by the Mercedes of Hamilton and Valtteri Bottas being confined to only fourth and fifth on the grid, respectively, with Sergio Perez ahead of both in third.

For the first time this season, Verstappen will have his team mate between him and both Mercedes when the lights go out, making the considerable challenge of chasing down the championship leader that much more complicated for Hamilton and his team.

And with Perez’s insistence after qualifying that the Red Bull “definitely have a better race car than qualifying,” Mercedes may face their deficit in the championship growing wider come Sunday afternoon.

But adding further intrigue for tomorrow is that Lando Norris will be starting from the front row in the McLaren. Last weekend, Norris sat third on the grid and held off Perez and Bottas for almost 10 laps before eventually surrendering the position. he went on to finish in that fifth place, ahead of the two Ferraris.

Norris has form around at the Austrian Grand Prix, having claimed a dramatic first podium at the event last year. A repeat performance tomorrow will likely be beyond McLaren’s raw pace relative to the Red Bulls and Mercedes over typical race distance, but Norris will almost certainly be a factor in the early phase of the race, should be get a clean getaway from the line.

Behind the front five, the two AlphaTauri drivers of Pierre Gasly and Yuki Tsunoda will be the highest starting soft tyre runners when the race begins. With this event using a softer range of tyres compared to last weekend’s Styrian Grand Prix, Gasly knows he is not on the ideal strategy, but that it is the correct approach for their them.

“We know it’s not going to be easy, but to be fair, we didn’t have a choice,” Gasly explained. “We thought we didn’t have the pace to qualify on the medium. So we’re committed to the hard tyre, which I believe was the right thing to do.”

Will Ferrari fly through the field once more?

While last weekend’s race proved a comfortable one-stopper – with Red Bull and Perez only just unable to make a two-stop work to jump Bottas at the finish – Pirelli expect the softer compounds could push more teams to consider a two-stop strategy this time around.

But with long straights meaning drivers lose a lot of time in the pits, and with a relatively low historical risk of Safety Cars, eking out a one stop if at all possible will likely remain the desired choice for teams. This is the reason why securing passage to Q3 on medium tyres was of such critical importance for those up the front.

It is a large part of the reason why Ferrari were less disappointed then many might expect by only managing 11th and 12th on the grid for Carlos Sainz Jnr and Charles Leclerc (which became 10th for Sainz after Sebastian Vettel’s penalty). With free choice over which brand new set of tyres to start the race, the Ferrari drivers have at least a tactical advantage over those around them.

A week ago, the Ferrari team mates showed impressive race pace around the Spielberg circuit to make up for earlier setbacks – Sainz in qualifying, Leclerc on the opening lap – to work their way through the field to cross the line in sixth and seventh. Should they stay out of trouble in the opening laps tomorrow, we may see the duo make more moves up the order.

Points at last for Williams?

Another notable participant who appears to have set themselves up for a strong afternoon is George Russell in the Williams. Fresh from Williams’ strongest race showing on pure performance since he first joined the team in 2019, Russell further demonstrated his car’s potential by reaching Q3 for the first time with the team and with the use of medium tyres.

Russell had been running solidly in the points on merit in eighth before a rare pneumatic problem forced him into retirement. But after an even more promising start to this second weekend in Austria – and starting the race on the ideal strategy – it seems there has been no better opportunity for Williams to race for their first points since the 2019 German Grand Prix.

One final point of interest will be in the fortunes of the two Alpine drivers. There may only be three places separating them on the grid, but Fernando Alonso and Esteban Ocon are driving as if they are in two completely different cars around this Austrian circuit, with Alonso claiming he could have qualified as high as sixth had be not been blocked by Vettel on his final flying lap.

If Alonso is truly faster than the cars immediately ahead of him, it will be interesting to see if and how he is able to move up through the field – especially after he claims his Q2 elimination ruined his weekend as Alpine’s strategy relied on him reaching the top 10.

Alonso also spent many laps behind Lance Stroll last time out, unable to find a way by. If he wants to secure more points this weekend, Alonso will be hoping he is not frustrated in a similar fashion again in this race.

Will this be Red Bull’s fifth win in a row? Can Norris beat any of the big four cars? And is Russell finally going to score points for Williams?

Share your views on the Austrian Grand Prix in the comments.