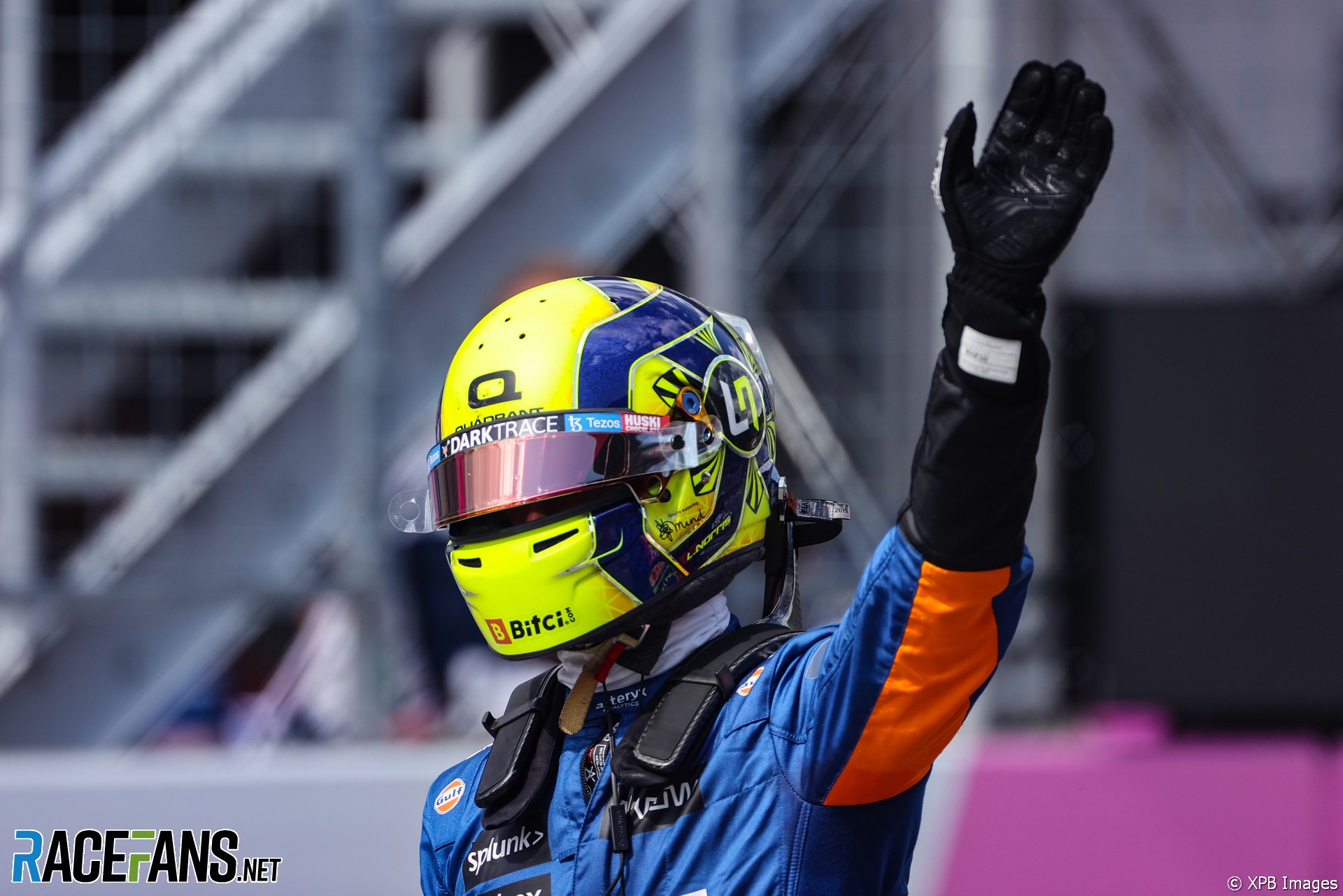 Lando Norris doesn’t expect to have a Red Bull-rivaling car for the Austrian Grand Prix, but will “go for it” if he does end up battling Max Verstappen.

For the first time in his Formula 1 career, Norris will start from the front row on Sunday, having qualified just 0.048 seconds short of pole position.

With the inside grid slot for the opening corner, Norris does have an opportunity to take the lead of the race at the start. However he is wary of last week’s Styrian Grand Prix at the Red Bull Ring when third place in qualifying translated into a lapped fifth in the race.

His initial prediction of his likely race position after qualifying second was “probably another P5.”

“We’ll do our best to try to take a step forward and go in the right direction,” Norris continued. “It wasn’t like we were exactly close last weekend, and now we have that little bit more of a step – I don’t want to be too negative and I want to be optimistic, as I should be – but I’m also realistic and know that it’s going to be a very tough race.

“We’re in the best position possible to maximise everything. But if I have a chance to go for P1, if there’s a chance to race Max and go for it, then I will. I’m still doing that, I’m still racing. I still want to do the best I can. But I think I also know what’s best for us, what’s best for myself and the team and who we’re sadly really racing against in the race tomorrow.”

“We are where we are,” said Norris after qualifying. “I think throughout this year we know we don’t have a good enough car comparing to Red Bull or Mercedes in general, and maybe today we do.”

“But considering how much quicker they were last weekend, I think it’s obvious we struggle in a lot of areas. The car’s not as quick as them and a lot of things are not possible comparing to them. So I think I maximised our result and that’s all I can do.”

Last week Norris held off the quicker cars of Perez and Valtteri Bottas for 10 laps before they overtook him. McLaren team principal Andreas Seidl said it was a pragmatic decision by his driver given the pace difference, and expects he will walk a similar line between fighting the front-runners and ensuring he delivers the best possible result.

“It was not about not being allowed to fight them last weekend, I think Lando had a good enough overview himself that at some point it was clear it was not possible. That’s something as well where we’ll have to see, again, how the race goes.

“Of course, as we know, Lando, he will try to stay at the front after the race start. I think if there’s any chance to fight even Max, for example, in the race start on the first lap he will do it. But then we simply need to see how it goes.

“Despite the great result [in qualifying] we know exactly where we are as a team, with the car. With our drivers we have seen last weekend that in terms of race pace, both Red Bulls and both Mercedes simply are clearly a big step away, still, from us.

“But we need to see how it goes. We have seen in the past that it was possible in races to beat one or the other Red Bull or Mercedes and we will obviously go into the race and see if there’s any possibility to do that again.”