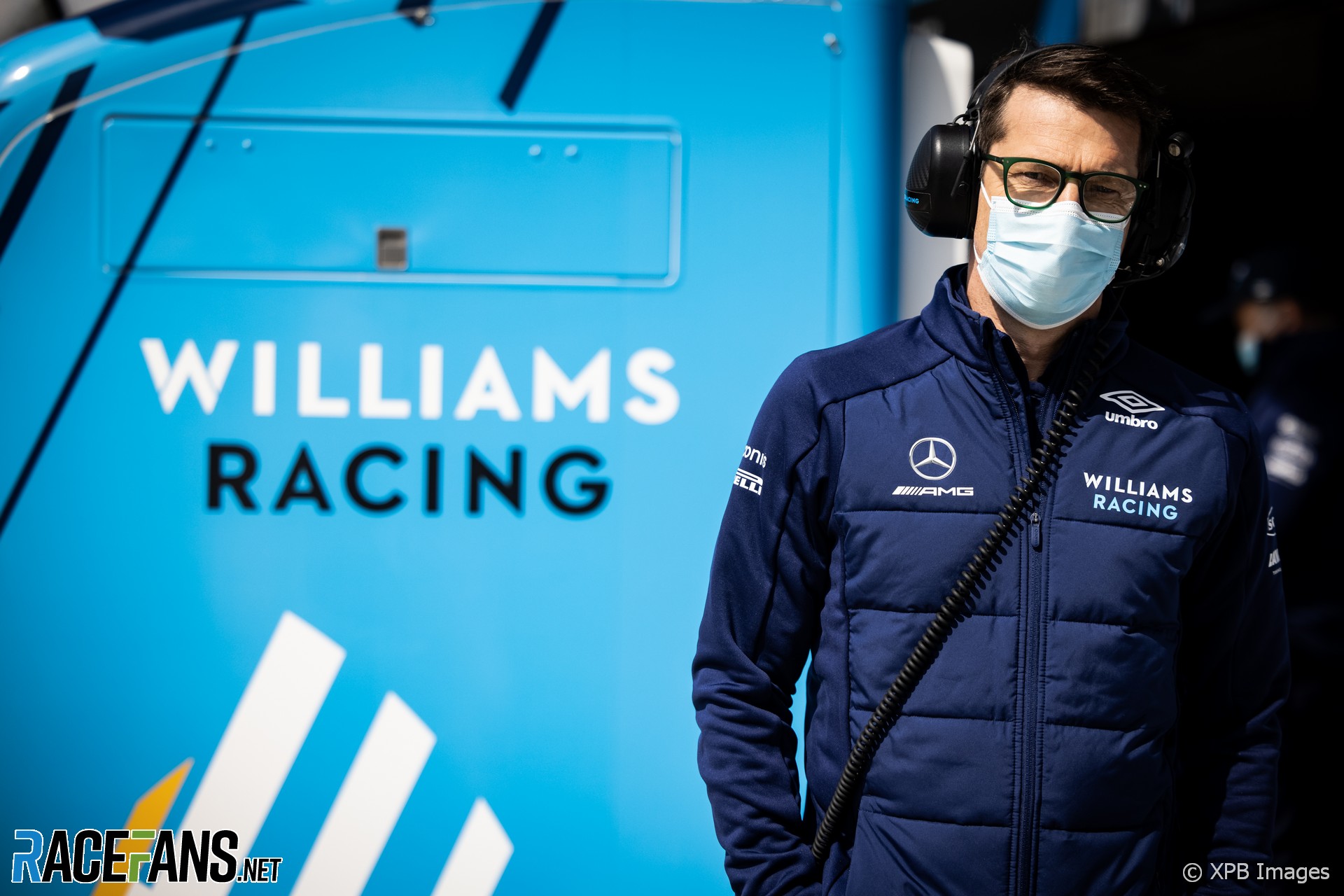 Almost a year on from their sale to Dorilton Capital, and with their home race weekend coming up, things are looking up at Williams.

The team were genuine points contenders in both races at the Red Bull Ring. George Russell secured their first appearance in Q3 since 2018, and took the chequered flag within six seconds of the top 10.

The progress has come about under the guidance of new technical director Francois-Xavier ‘FX’ Demaison, appointed back in March. As he explained to RaceFans, the recent gains have come about despite the team halting work on its present car, instead focusing efforts on the overhaul of the technical regulations which is coming for the 2022 F1 season.

“This is the car we have, we will not develop it any more,” explained Demaison in an interview with RaceFans during the Styrian Grand Prix weekend. “We stopped development two weeks ago, we chose to concentrate on next year’s car.”

“It purely shows the strength of the race team which at the moment deliver a very good job,” he adds. “So I’m very happy with this.”

Russell’s efforts have brought them tantalisingly close to ending a points drought which is the longest in the team’s history. But the injection of capital from Dorilton points to better times ahead. It has already led to a shake-up in the team’s management and the arrival of CEO Jost Capito, who tapped his former Volkswagen colleague to join as technical director.

Demaison is overseeing updates to the team’s wind tunnel and other improvements to their infrastructure, but it’s clear he’s impressed by the strength of its workforce.

“In terms of manpower we have a good team,” he said. “We did some changes recently, but now we will concentrate on working on the car.

“That’s the main thing today, to develop the technical capability, mostly software and the wind tunnel. And the rest is and get everybody on the same boat and design this next car.”

Just two years ago this team failed to complete its first chassis in time for the start of testing. That proved the precursor to an excruciatingly uncompetitive season where they typically languished around a second per lap off the pace of their next-slowest rival.

Underlining the gains Williams has made, in Austria they were closer to the pole position pace than they had been at any point in the previous five years. A switch to Mercedes-sourced gearboxes next year should bring a further uplift. Demaison says the team has already defined some aspects of the FW43B’s successor.

“We have a production plan with some deadlines for freezing some parts of the car,” he said. “To be sure we will have a car ready for the first test in March next year. That’s a normal project plan that any F1 team has to follow.

“Maybe some teams with more people can be a bit more aggressive in terms of a project plan but we are happy with the results we have with the people we have and we follow this plan. For sure we will freeze already – we already froze some of the concept.”

This isn’t Demaison’s first time at Williams: While Jacques Villeneuve was delivering the team’s most recent championship silverware, Demaison worked on their Renault Laguna British Touring Car Championship programme in the nineties. However there weren’t any familiar faces from those days still around when he walked back through the factory doors.

At Volkswagen he developed their rally cars and the radical, all-electric ID.R which has set a series of records for a machine in its ‘class’. While he may have arrived from outside grand prix racing, he’s found “a lot of similarities” between past cars he has worked on and Formula 1 machines. “Apart from the aero which is for sure completely different, the chassis design is quite similar,” he says.

“Today the technical director is not designing the car on his own, his job is to make sure that everybody is trying to achieve the same goal and make the team work together. So that’s my main task at the moment.”

He joined Williams as the team passes what it hopes will prove its lowest ebb as it plots a course back to the front of a championship it was dominating when he first worked for them. Despite the promise shown in recent races, he is realistic about their short-term goals. They lie ninth in the championship, and the best they might hope for this year and next is to move up to eighth.

To do that they will likely have to beat Alfa Romeo, headed up by team principal Frederic Vasseur, who has history with Demaison. “I want to beat my colleague,” he says. “We were at school together.

“So I have to beat him for sure,” he adds. “I want to finish in front of him next year.”

But looking to the longer-term, Demaison’s goals are naturally set much higher than a bit of friendly one-upmanship.

“We have to be realistic, it’s a long journey,” he said. “Obviously, for next year, we want to score points a bit easier than it is today. That’s clearly the target.

“Then for ’23 to try to knock on the Q3 qualification and be a bit closer to the fifth place.”

That may have seemed on the hopeful side when RaceFans spoke to Demaison early in the Austrian Grand Prix weekend. But Russell’s star turn which put Williams eighth on the grid last time out was the clearest sign yet that the good times are returning at Grove.