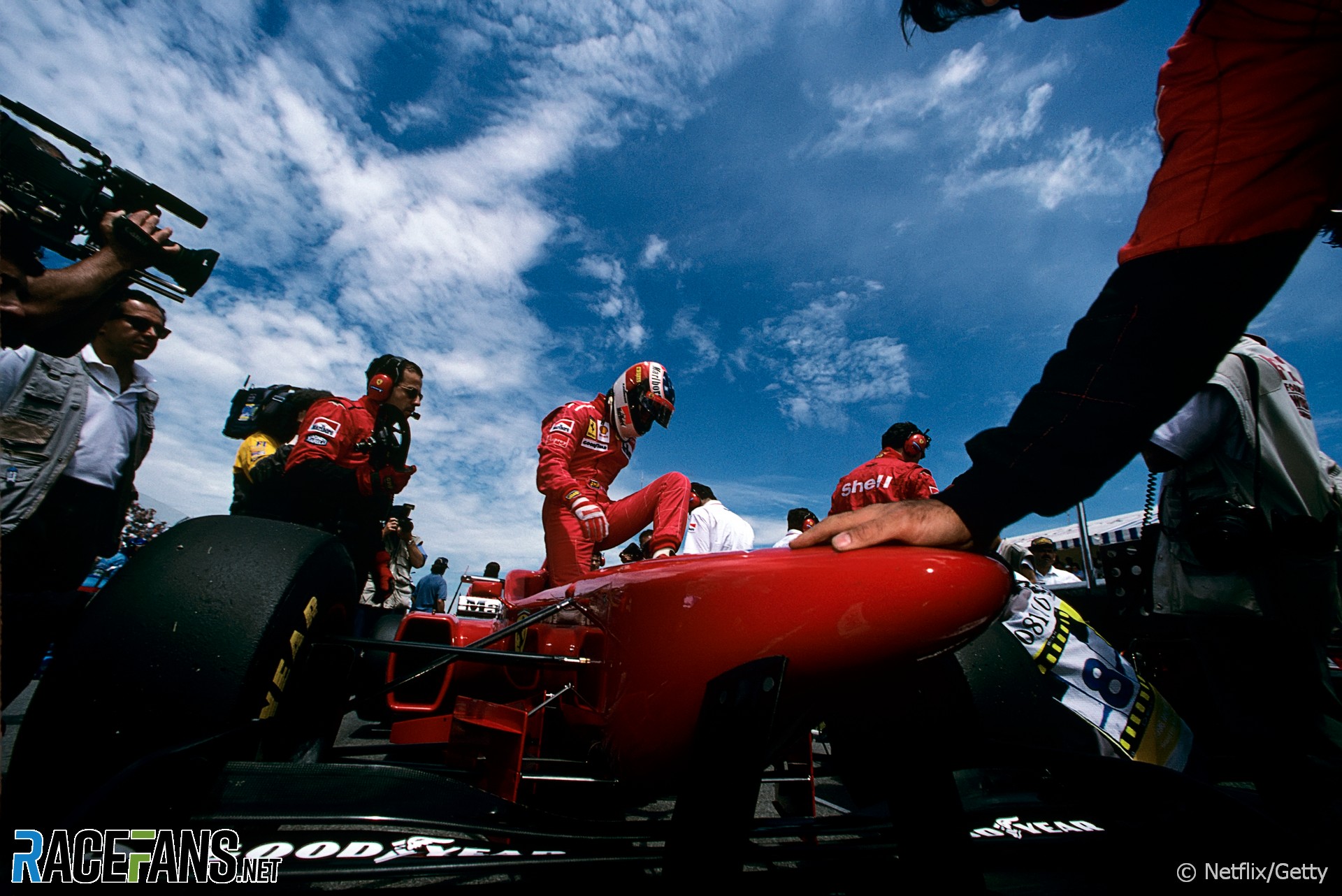 Schumacher, the new film on the life of Michael Schumacher, covers more than just his 306 races, 91 wins and seven world championships in the course of its 112-minute running time.

From the opening frames, scenes of his little-seen family life are woven throughout the film. This was a deliberate decision made with the blessing of those closest to him.

“In order to preserve his private sphere as a source of strength, he has always rigorously and consistently separated his private from his public life,” explained Sabine Kehm, long-standing representative of the driver and his family. “This film tells of both worlds. It is his family’s gift to their beloved husband and father.”

While Schumacher’s personal and private worlds are blended throughout the film, his racing career inevitably provides its thrust. The filmmakers’ focus is Schumacher’s efforts to become the first driver to win a championship in a Ferrari since 1979. As a result, once the climactic scenes of his Suzuka 2000 triumph are done with there’s only 20 minutes of the film left to cram in the remainder.

From an early sequence which revolves around his stunning debut at Spa-Francorchamps in 1991, we are treated to a parade of major names telling their Schumacher stories. Mika Hakkinen describes going up against him for the first time in karts and former manager Willi Weber reminisces fondly of their last taste of anonymity. Bernie Ecclestone, Jean Todt, Ross Brawn and a host of others follow.

While some of their stories are familiar, other sections provide illuminating new insights. A flashback to Schumacher’s early years is rich in period details. A young Schumacher sporting a Hasselhoff-grade mullet explains he entered a karting competitive as a representative of Luxembourg instead of his native (West) Germany to save money, so tight were the family’s finances.

Thereafter the narrative returns to Schumacher’s progress to championship glories with Benetton and, eventually, Ferrari. Yet despite promises to tell his story without “sugar-coating”, little room is found to scrutinise the more controversial moments of his career. While Jerez 1997 is dealt with unflinchingly the many controversies of 1994 pass by – save for a selectively-edited retelling of the Australian Grand Prix – and no room is found for ‘Rascassegate’.

While Schumacher omits some of the more contentious parts of its career it also overlooks chapters which would have served its narrative better, such as his final-round title defeat to Hakkinen in 1998 at Suzuka. A few jarring liberties are taken with chronology at this and other points as well (more oddly, a shot of Gerhard Berger appears during the credits which someone appears to have mistaken for Schumacher).

Of all the motorsport documentaries which have surfaced since 2010’s Senna demonstrated the potential of the format, few subsequent productions have measured up to its high standards. Schumacher comes nearest, though while Senna immerses the viewer in footage of its period, Schumacher frequently cuts away to introduce its talking heads.

There is some terrific and obscure behind-the-scenes material, particularly the section on Schumacher’s debut. More of this in later races would have been appreciated, but it seems there wasn’t room in the film (or perhaps the budget) to show more of what wasn’t broadcast at the time.

A significant amount of new material comes from the family’s archive and shows an unfamiliar Schumacher letting his guard down or signing karaoke with David Coulthard. But the best additions to the film are a handful of little-seen interviews with Schumacher himself.

His account of Ayrton Senna’s crash in the 1994 San Marino Grand Prix, the confusion around what had happened and his disbelief at the news of Senna’s death is a powerful sequence. This is a rare glimpse of a more vulnerable Schumacher – the one that couldn’t contain his emotions after equalling Senna’s wins tally at Monza six years later.

This is one of a few moments where the film musters an emotional punch on a par with the Senna film. Another is Schumacher’s startling description of his leg-breaking 1999 crash at Silverstone.

This foreshadows the final sequence which addresses the dreadful events of December 29th, 2013. Many viewers will approach Schumacher hoping to learn something positive about his condition almost eight years on from the skiing crash which left him with a severe brain injury. In its closing passage a tearful Corinna Schumacher, who mentions he suggested they go skydiving instead of taking their fateful trip, describes how she “misses” her husband who is “different but he’s here” – a heart-breaking glimpse into a desperately sad situation.

Schumacher features some excellent new footage and makes great use of rare material from his family’s archives. The contentious moments of his career are covered in a manner which will provoke eye-rolls from his detractors, but his fans may also find it leaves them wanting in places. Nonetheless the filmmakers deserve credit for the job they have done profiling a complex figure whose story has a tragic coda, which left one of Formula 1’s greatest champions unable to tell his story for himself.

Schumacher is due for release on Netflix on September 15th 2021