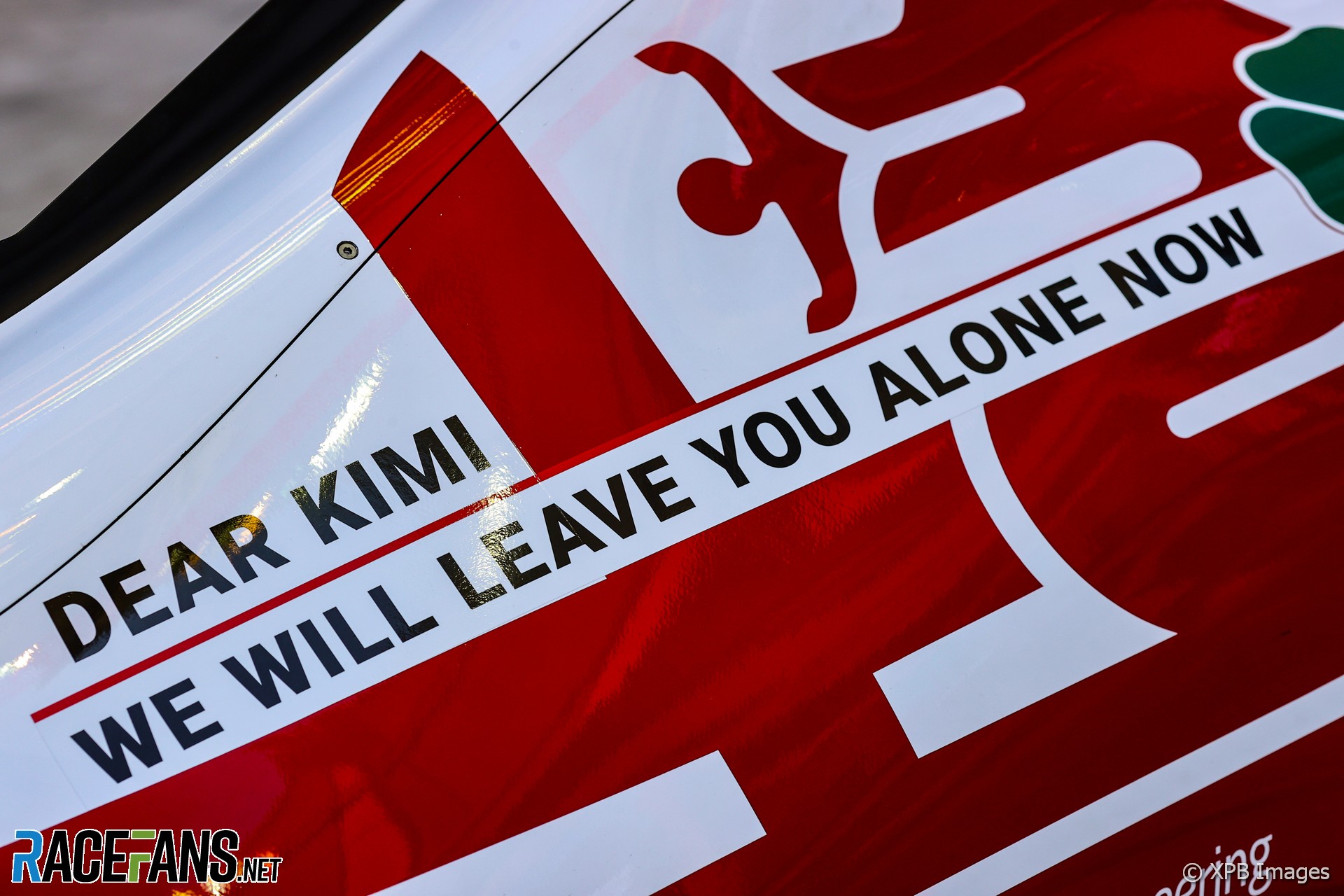 Kimi Raikkonen and Antonio Giovinazzi will run special messages on their cars this weekend as the Alfa Romeo team mates depart Formula 1 together.

The pair have been team mates since Alfa Romeo returned to F1 as a manufacturer entity in 2019. Their best result in that time was a four-five finish in that year’s Brazilian Grand Prix.

They are being replaced with an all-new driver line-up for 2022. Raikkonen is heading for retirement after his 349th race – a record. Giovinazzi heads to Formula E harbours ambitions of a return to F1.

Their send-off liveries contain text referring to their F1 careers Raikkonen’s car carryies the message “Dear Kimi, we will leave you alone now” as tribute to his famous radio message en route to winning the 2012 Abu Dhabi Grand Prix for Lotus. Giovinazzi’s says “Grazie di tutto, Antonio” which is Italian for ‘thanks for everything’.

Both want to enjoy their final race weekends for different reasons.

“Hopefully we have good speed so we can have some fun but I’m looking forward to get the season done and no need to worry about any schedules,” said Raikkonen, who said he doubted his F1 exit would be emotional after 19 seasons of racing at the top echelon.

“[There’s] a lot of good memories, a big part of my life has been spent here. I don’t know if it’s a good or bad thing, but that’s how it is because it takes a lot of time.

“But it’s never been, let’s say, the most important thing for me in my life. It’s nice that it comes to an end, and I’m looking forward to the normal life after.”

Giovinazzi, while looking forward to his future with the Dragon/Penske Autosport team in FE, doesn’t want his F1 career to end yet.

In last weekend’s Saudi Arabian Grand Prix, Giovinazzi picked up his best result of the season with a ninth place finish and featured in the top five in free practice while Raikkonen had a tougher run to 15th but a few races before had finished eighth in Mexico City.

“It’s been a good three years [with Kimi], actually doing five years already in Ferrari” Giovinazzi added. The pair were team mates when Raikkonen raced for Ferrari and Giovinazzi was their simulator driver.

“It’s been a good relationship with him. Now of course we come from a good weekend that we scored points. I don’t know how we will be here, because so far this year with the same car in Qatar we were nowhere and then suddenly in Saudi we were fast. So we will see how it is here, but I just want to enjoy and have another good one on Sunday.”