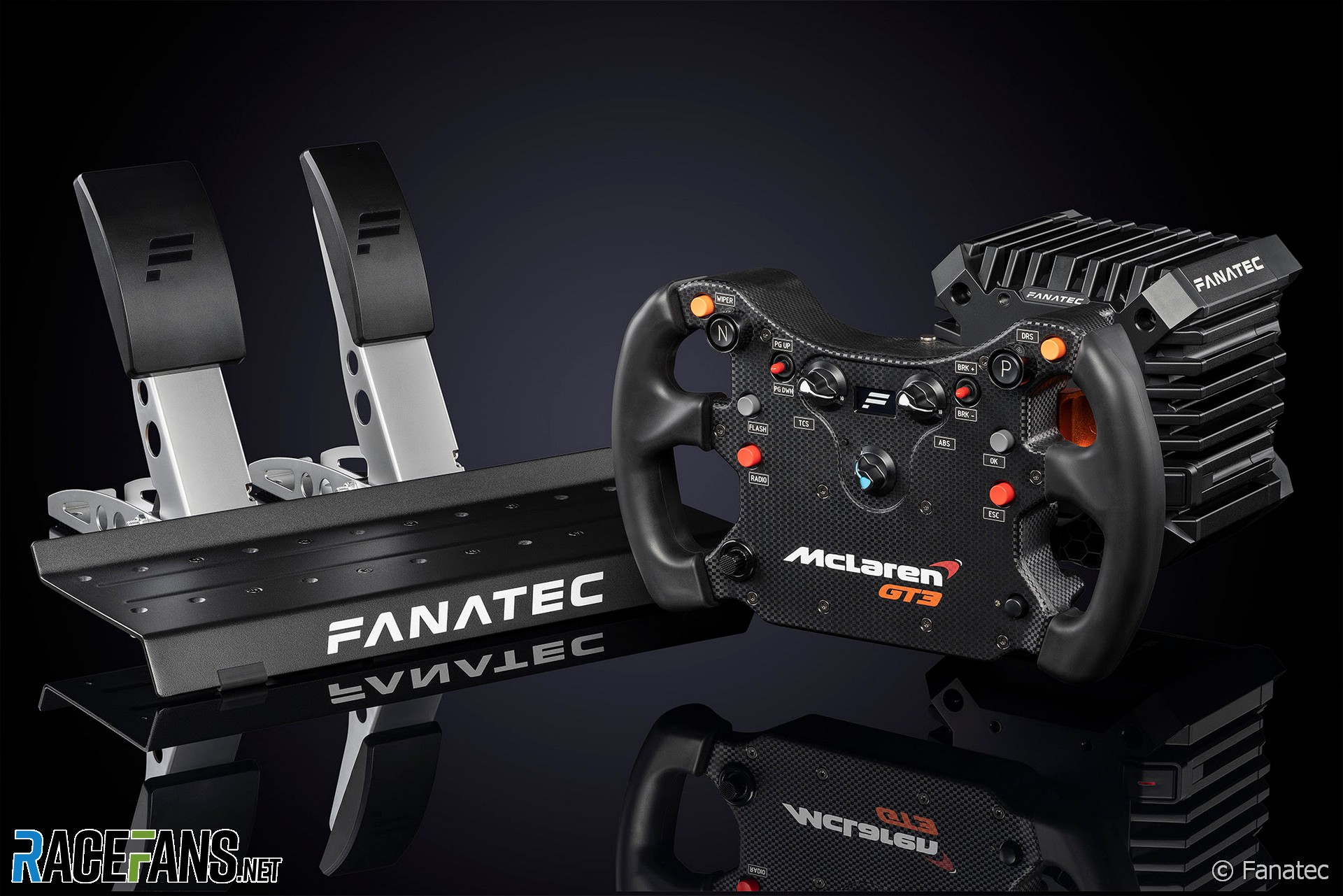 “Every driver has their limit,” proclaims the first layer of packaging as I unbox the Fanatec CSL DD base. “My limit is further than others.”

I appreciate the sentiment, although it would be a highly optimistic assessment of my abilities at the wheel, virtually or otherwise.

I am a moderately better simracer than I was a DJ, but that really is saying very little. Surprisingly, my experience of both turned out to be beneficial for my first experience of Fanatec’s new line of direct drive racing wheels. The CSL DD reviewed here isn’t their first direct drive product, but it is being offered at a much more competitive price than their previous models.

To understand the advantage of a direct drive wheel over a belt-driven model it helps to have been a DJ, however limited your abilities (or under-appreciated your taste in music) might have been. Like decks, simracing wheels also come in belt-drive and direct-drive models; the former uses a belt (or gears) to connect its motor to a rotating shaft, while on the latter the shaft is – you guessed it – directly connected to the motor.

In both cases direct-drive systems offer obvious benefits. When the user twist the shaft back and forth – whether they are scratch-mixing or swerving through the opening sector at Suzuka – their movements encounter less resistance. The absence of belts or gears also allow direct-drive models to transmit more torque.

For the purposes of creating a more realistic simracing experience, these are both valuable benefits. The difference made by direct drive is immediately noticeable when you grab a wheel (in our case a CSL Elite Steering Wheel McLaren GT3 V2) connected to a CSL DD base and take it for a virtual spin.

The steering feels not just precise, but clearer and smoother. To get the best impression I did back-to-back sessions on F1 2021 with track conditions set to wet comparing the direct drive model against a conventional wheel. It was noticeably easier to lap consistently using the CSL DD.

In games where rapid steering corrections were needed, the benefit of the CSL DD was particularly obvious. I attacked snow-covered rally stages with renewed gusto in WRC 10, wrenching the wheel back and forth from bend to bend in total confidence I wasn’t going to bend something.

The force feedback was also more textured and convincing, giving a sudden sense of numbness when I locked a wheel, and varying degrees of thuds and thumps over kerbs, grass and gravel. It’s strong too – I doubt it could be enough to injure an adult, but the “not for children” note in the manual is there for a reason.

After testing the CSL DD, there’s no denying that going back to a conventional belt drive wheel afterwards didn’t feel the same. It became like trying to use a pen while wearing gloves.

The whole product is crafted to Fanatec’s dependably high standards. The build quality is superb and the installation is as close to plug-in-and-go as a device as weighty and powerful as this is likely to get.

To obtain the full 8Nm of torque you require the Boost Kit 180 which supplies double the usual 90W of power to the base. When the unit detects a more powerful supply is present, it takes advantage of it. It is definitely worth the extra outlay to fully experience what the unit is capable of.

Connect the power supply, pedals and data cable (via USB-C, with adaptor provided) to your PC or Xbox and you’re ready to go (Fanatec has recently launched a separate version of the CSL DD for PlayStation users). I’m hard pushed to find complaints, but here goes: The sticker on the wheel shaft didn’t come away cleanly and it took a few minutes of scraping to clean it off. That’s all I’ve got.

The base is remarkably compact for the performance it provides. Fanatec have developed their own custom motor and used carbon fibre to reduce the rotational weight of the shaft to improve its performance. The resulting shape is pleasingly cuboid, house in aluminium with plastic fascias.

While the hardware set-up is straightforward, the software side is more involved, though here too Fanatec have made improvements. The drivers make it easy to upgrade the firmware and there is a simpler version of the tuning menu available. Rest assured, all the detailed settings remain present and correct for enthusiasts who want to tune the device to their exact preferences from game to game.

One of the unexpected advantages over past Fanatec models reviewed here previously is the unit is cooled passively with no need for any fans. It emits surprisingly little heat even after continuous use, and, best of all, is almost silent in its operation.

A desk clamp is available for the CSL DD but if you’re going to be fighting an 8Nm motor for hours at a time then a dedicated simracing seat and wheel mount is a must. Adjustable bolt fixings are provided to suit a range of popular set-ups.

If you were considering an upgrade to an earlier direct-drive wheel, you may well be able to afford one with the saving the CSL DD represents over its predecessor. Fanatec’s previous direct drive model, the Podium Wheel DD1, sells for €1,199.95 (£1,000) – and that’s just the base. By the time you’ve added the essential wheel and pedals you might have easily spent €1,500.

In comparison the CSL DD range starts at €349.95 for the 5Nm model and rises to €479.95 for the 8Nm version reviewed here. Add on the essentials and you can be direct drive simracing for little more than half the price of the previous system. The complete set-up used for this review came to €799.80 (£667.61). Although be mindful of post-Brexit import charges if you’re considering ordering direct from the manufacturer.

The base is designed to be compatible with Fanatec’s coming new range of ‘quick release 2’ wheels. In the meantime if you’ve already got the necessary add-ons, the CSL DD base makes an almost irresistible upgrade.

The only downside is how long it may take to get hold of one. At the time of writing, Fanatec’s US website indicates they won’t have stock until February, while those in Europe will have to wait until April.

How we tested the Fanatec CSL DD direct-drive steering wheel

The Fanatec CSL DD direct drive steering wheel system was tested using a selection of hardware and software including:

Read all RaceFans book, game and other reviews