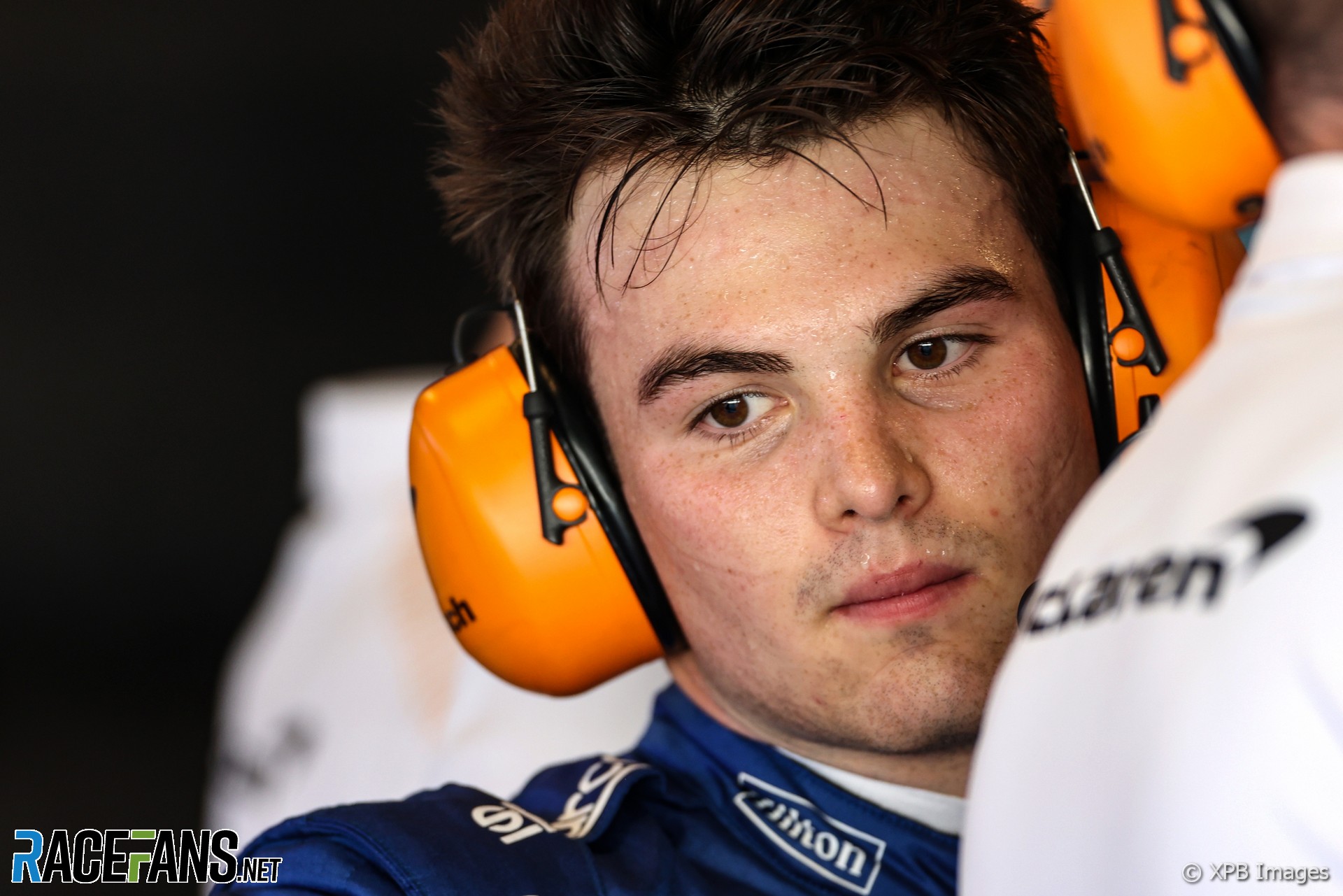 RaceFans operates thanks in part to the support of its readers. In order to help fund the development and growth of the site please consider becoming a RaceFans Supporter.

For just £1 per month/£12 per year you will also be upgraded to an ad-free account. Sign up and find out more below:

The FIA’s international sporting code outlines that only drivers who have achieved 40 eligibility points over their last three complete seasons of competition, with different championships across the world of motorsport offering various levels of points.

Currently, the FIA awards 40 points only to drivers who win the IndyCar Series title, with 30 awarded to the runner-up and 20 to the third-placed driver. O’Ward, who tested for McLaren’s F1 team in Abu Dhabi in December, believes drivers who finish around the top of the standings in IndyCar deserve more points.

“I mean, to me, it’s ridiculous that someone that’s been fourth and third in the IndyCar championship doesn’t have or can’t get 40 points in the superlicence,” said O’Ward.

“I think many drivers agree with me. But, from what I understand, fourth would give you 10 points, third gives you 20. So I’m assuming I’m at thirty points on the superlicense? Yeah, I haven’t really stressed on that side, because as much as I say, ‘oh, maybe you can get a few points here’, at the end of the day, you have to leave it to the people that want to give it to you. If they don’t want to give it to you, then, ‘sorry, bud’. You got to have another year and get ten more points, I guess.”

The FIA Formula E championship will likely expand to feature a race in India in future seasons, after the series signed a letter of intent with the Telangana State government to hold a race in the city of Hyderabad.

Formula E chief championship officer, Alberto Longo, said that the series was keen to explore the opportunity to race in India.

“We welcome Hyderabad and the State of Telangana’s interest in hosting a round of the ABB FIA Formula E World Championship,” said Longo. “With this letter of intent we can further explore the exciting potential of returning elite motorsport to India.”

Formula E team Mahindra Racing, which competes under an Indian racing licence, have been a part of the championship since the inaugural season back in 2014-15. The 2022 season of Formula E begins in Saudi Arabia on Friday 28 January.

2022 INDYCAR DRIVER ! A dream come true to be back in the🇺🇸 thanks to Jonathan Kendrick, @rokit and @AJFoytRacing for the opportunity! Can’t wait to Rokit! 🚀🏎 follow the #11 Rokit Chevrolet!😉 pic.twitter.com/4VqqhDNZ4i

"Four victories from eight races in 2021 – including two wins at the season-ending double header at COTA – saw Jamie hold off compatriot Alice Powell and scoop the $500,000 top prize. That takes Jamie’s total W Series earnings to $1million having collected the same prize money in 2019."

"We’re thrilled to support five Arkwright Engineering Scholars, providing funding to them and their schools so they can invest in the technology and tools which they will need to see them through their scholarship."

"Starting in March of 2022, ORECA will be able to evaluate hydrogen technology engines on two BORGHI machines with a capacity of 800hp and 1000Nm Thanks to the latest generation combustion analysis tools, as well as our Design Office and combustion simulation partners, the entire team is excited to develop the engines of tomorrow."

"The Extreme E Count Us In Challenge includes a variety of actions available to fans to contribute towards a greener future, including not using single-use plastic, walking and cycling more, eating more plant-based foods and driving an electric vehicle. Each step is attributed to the fans’ favourite team, and the team with the most steps at the end of season one would win the inaugural Extreme E Sustainability Award."

Looking back at the car development battle between Mercedes and Red Bull over the 2021 season, RandomMallard is in awe of just how close the two rivals were…

As others have pointed out, I think the key takeaway is the cars were, over the course of the season, very equal. The Red Bull was definitely stronger earlier in the season, but I highlight Silverstone as the turning point of the championship. Not because of the crash, but because of the Mercedes upgrade. From then onwards, they were much more competitive, for example I think many people expected Red Bull to do well in Hungary, and Mercedes took one of the most emphatic front row lockouts of the season in my opinion.

One of the things I loved about the final rounds of the season in particular was going into a weekend with absolutely no idea who would be faster, and then how it would change throughout the weekend. Prime examples being the USA (Red Bull successful at what was expected by many to be a Mercedes track), Mexico (Mercedes got the qualifying pace/Red Bull failed to maximise qualifying, but Red Bull seemed faster in the race), and Brazil (Red Bull expected to do quite well, but Lewis and Merc got what seemed to be a perfect car to fight back and take the win), and to a lesser extent Jeddah and Qatar.

Over the course of the season, I would argue neither car was better or worse than the other. Both cars were absolutely incredible and masterpieces of engineering. Kudos to all the engineers, designers and factory staff at both Mercedes and Red Bull.
RandomMallard