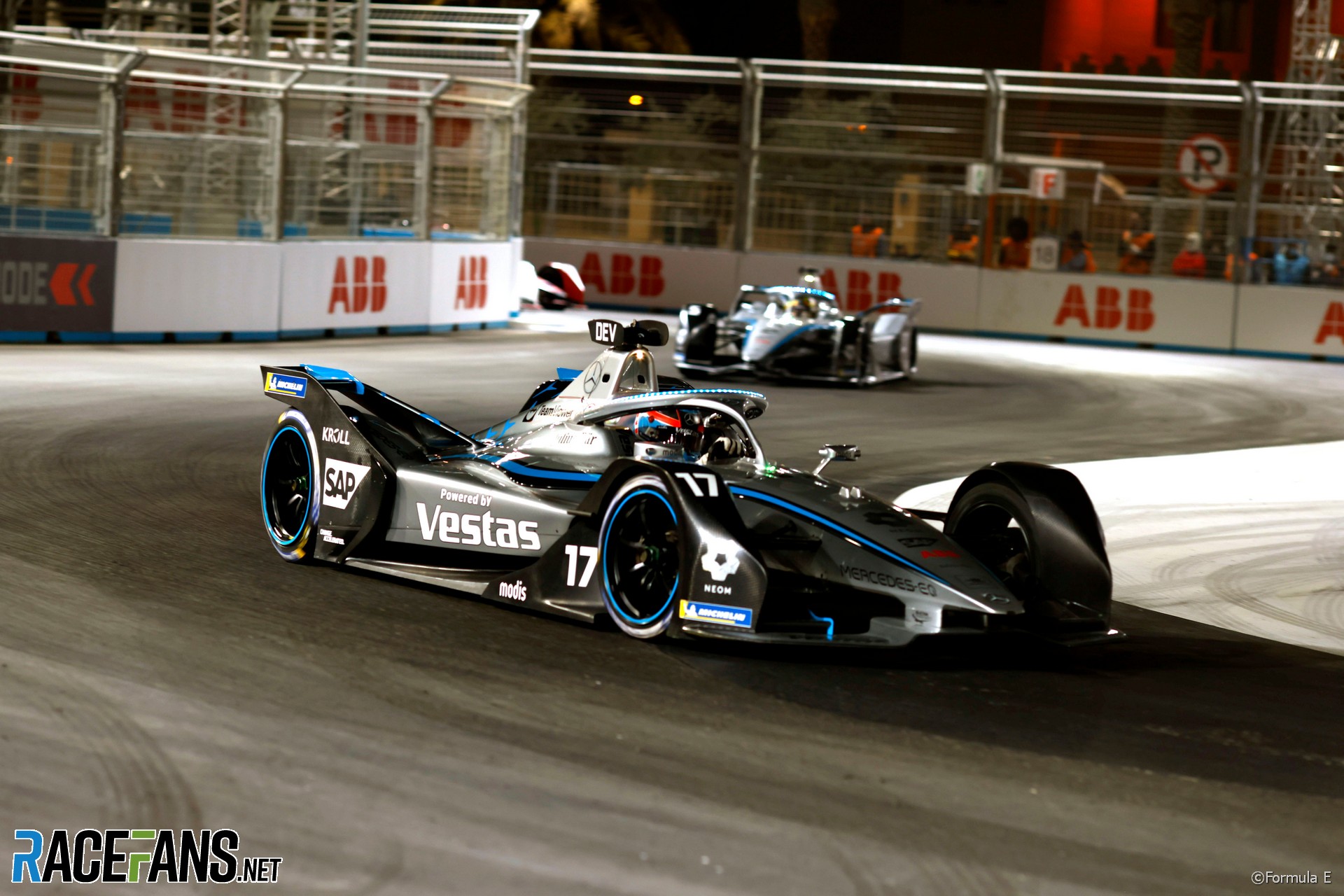 Vandoorne had led from pole, but surrendered the lead after he failed to activate his second attack mode correctly. Jake Dennis took third place on the podium after passing Andre Lotterer.

At the start, Vandoorne led away from pole while Nyck de Vries jumped Jake Dennis to take second place and a Mercedes one-two. Antonio Felix da Costa immediately pulled into the pits before completing the first lap with terminal suspension damage on his Techeetah caused by contact.

Lucas di Grassi, in his first race with the Venturi team, moved past Sam Bird to take fifth down the long startline straight. Fourth-placed Andre Lotterer was the first driver to activate his first attack mode followed the next lap by De Vries and Dennis ahead.

Vandoorne responded by taking his first attack mode and retained the lead, but the race was neutralised soon after when the Safety Car was deployed after contact between Robin Frijns and Oliver Rowland sent Rowland’s Mahindra into the wall at turn 17. Frijns later received a drive through penalty for the collision, while Rowland was awarded a three-place grid drop for tomorrow’s second race.

When the race restarted, Vandoorne attempted to take his second attack mode of the race, but was not awarded it after missing the first activation point. That dropped him behind team mate De Vries, as the pair then took their second attack mode together on the following lap, meaning De Vries was now in the lead of the race.

Lotterer passed Dennis to move into third place, but struggled to keep up with the pace of the leading Mercedes, who began to gradually build a gap to the Porsche behind. Dennis was rudely rebuffed by Lotterer when attempting to repass him along the start straight, before a second attempt laps later also failed when he ran wide at turn 18 after trying to out brake him.

With just under ten minutes of race time remaining, Dennis had a third attempt at Lotterer’s third place heading into turn 18 and managed to barge his way through. Despite warning his team over radio that he feared he had suffered a puncture, Dennis was able to pull away from the Porsche and begin to slowly bridge the gap to the Mercedes. Lotterer then lost more places to Sam Bird, Di Grassi and Edoardo Mortara, eventually dropping down to 13th place.

With five additional minutes added to the race time due to the Safety Car, energy usage became critical in the final laps. The Mercedes had enough of a margin to cruise through the final lap and take a one-two to start the season, with De Vries starting off his championship title defence in the best possible fashion.