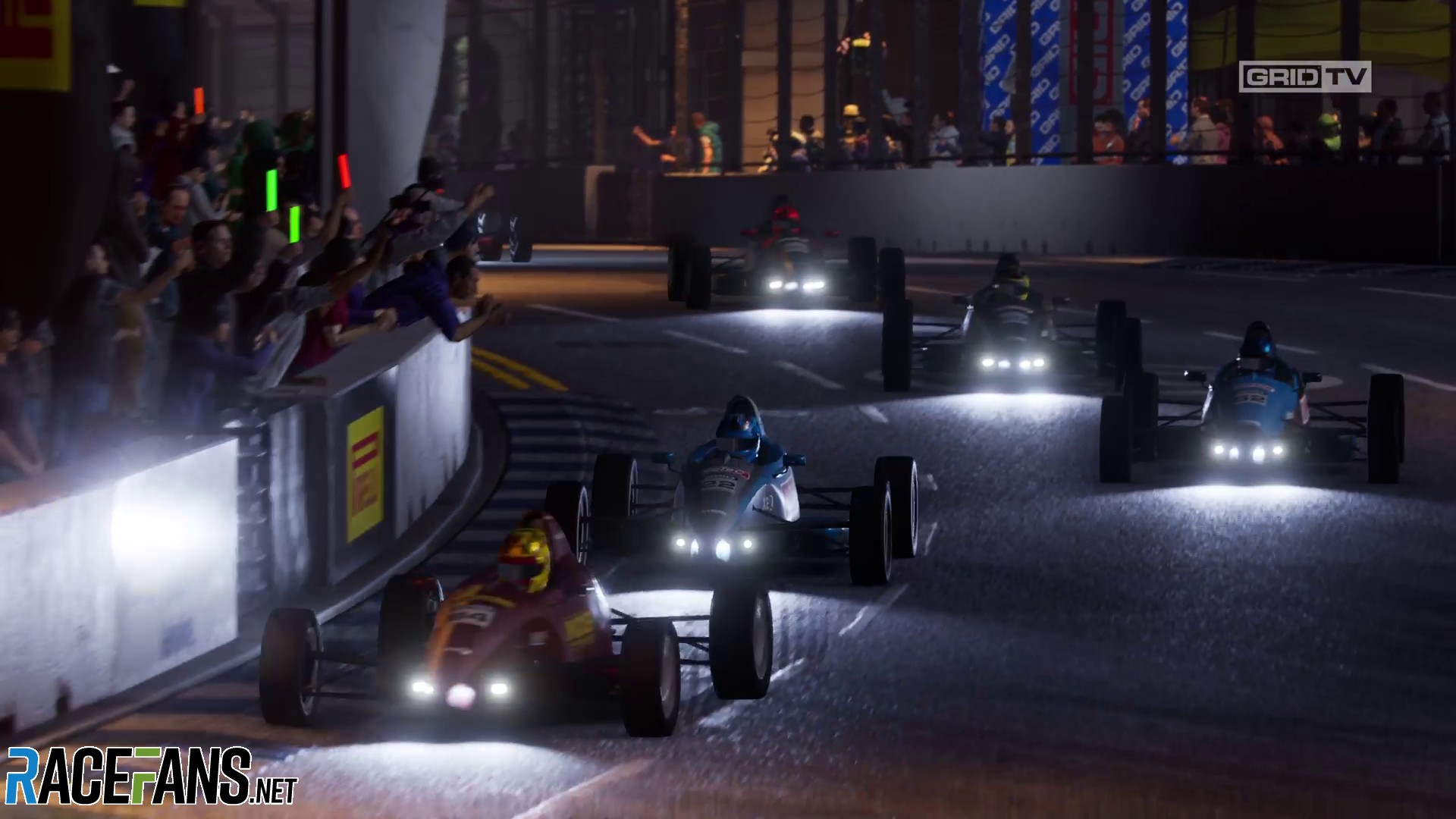 Fresh from a series reboot in 2019, Codemasters’ multi-discipline motorsport franchise Grid is back on current-gen consoles and promising a richer racing experience than ever before.

The first Grid title to be published under the EA banner, the latest edition comes with a big budget story mode designed to expand Grid’s fantastical racing universe and offer a bold vision of what racing could be.

If you’ve never played a Grid game before, it’s important to know this series does not aim for the same kind of realistic racing action that Codemasters’ official F1 series, Assetto Corsa, Gran Turismo or Forza Motorsport try to provide on console. There are no pit stops, strategies, yellow flags, tyre degradation or fuel loads to worry about in the world of Grid. Other than the lack of checkpoints, time extensions and a coin slot, this is pure arcade racing.

While that might lead many to immediately dismiss the game, do not let it put you off. The Grid series has always known exactly what it is and what kind of flavour of racing game it wants to provide. And if you’ve had any experience with the series – especially 2019’s release – you will know exactly what to expect out of Legends.

Through nine different categories of cars spanning touring and GT cars to trucks, drift cars and even the debut of electric vehicles for the first time, Grid Legends boasts the most varied car selection in the series to date. The game’s 22 total locations add up to a master track list of 130 possible circuits, featuring street circuits based on the real roads of major cities such as London, Paris, Chicago and Dubai, with a smattering of real world race tracks like Suzuka, Mt. Panorama and Brands Hatch thrown in for good measure.

Handling in Grid is extremely forgiving, to a degree where it’s almost as if understeer and oversteer simply do not exist in this world. Races are short, intensely action-packed affairs where you can throw yourself headfirst into corners with little worry for whether you miss the apex or not. AI drivers do actually race fairly hard on the higher difficulties, while your computer-controlled rivals are scripted to regularly crash, spin out or break down in front of you, keeping you on your toes. With grid sizes topping out at 22 cars, the overall racing effect is reminiscent to that of racing rental karts at the local go-kart track, only instead using real life racing cars.

While Grid Legends offers a wealth of wheel support, it’s designed very much around playing with a controller and suited very much to it. Even with all assists such as stability control, traction control and ABS fully switched off, you’re unlikely to struggle keeping even the most overpowered models on the road.

The headline new feature of Grid Legends – which the publisher has put considerable focus on in the lead-up to its release – is the expanded story mode known as Driven to Glory. It runs over 30 chapters and is interspersed with a faux fly-on-the-wall-documentary narrative which, as the publishers themselves acknowledge, owes a heavy debt to Netflix F1 series Drive to Survive.

Parallels must also be drawn with the Braking Point storyline in Codemasters’ previous release F1 2021. However, Driven to Glory has a larger (and impressively diverse) cast shot entirely live-action, while the story is longer and filled with far more drama – the details of which we’ll avoid giving away.

The production standards of the mode’s main cutscenes are the best thing about Driven to Glory. Created using a blend of real footage and renderings, the effect is impressive and helps bridge the gap between the narrative and the action.

Players of past Grid games will note the return of long-running rivals Ravenwest, who put the ‘pantomime’ into ‘villains’. But the rivalries between you and other characters aren’t just something you’re told about in the cutscenes: Various figures are designated as key opponents in gameplay and show you no mercy should you try to pass them.

I think it’s only fair to approach ‘Driven to Glory’ while largely suspending your disbelief. After all, no real life motorsport series in the world involves as varied a roster of machinery as this, switching from open wheelers to GT cars to stadium super trucks from race-to-race. Accepting it for what it is, the less-than-convincing portrayal of the inner workings of a racing team and the sometimes borderline ludicrous street circuits get a free pass.

At times, the story takes too great a liberty with realism, particularly in its portrayal of one character’s return from a serious injury. Other decisions seem downright peculiar: Mixing disciplines within a race adds a novel dimension, but when you’re racing in a truck cab, peering down at poor arch-nemesis Nathan McKane pedalling away in his Mini, the sense of being intimidated by the bad guy is somewhat lost.

A more persistent weakness of Driven to Glory is the generally incidental role your character plays in it. There’s that all-too-common pseudo narrative dissonance where your in-game performances have minimal bearing on the plot beyond nudging the story forward from one chapter to the next.

This can verge on the comical. If you arrive at a team and win every race for them you will still hear the commentators talking down your performances compared to your team mate. Part of the reason for this is that the story repeatedly skips past races in which you play no role in, which is jarring in itself. When your rivals are having monumental crashes, fighting in the pit lane and committing other acts of deviousness, you end up feeling like a bit player in a game where everyone else is the star.

How is Driven to Glory best enjoyed? Should you fire it up first of all or get some experience with the rest of the game beforehand? Having played through the whole thing, it seems wise to suggest building up some experience in the regular career mode first and learn the tracks and cars. Then, you can attack story mode at a higher difficulty level (if you consider yourself a competent driver, bump it up to ‘Expert’ from the start), and enjoy a sense of accomplishment for pushing the story along. Otherwise much of the challenge arises less from the racing than coping with an onslaught of unfamiliar tracks and cars, which is far less satisfying.

Not that the various disciplines feel all too different from each other. As accessibility and forgiving handling is the aim, there’s not a substantial difference between the various car types. The GT cars, prototypes, single seaters and electric cars all feel fundamentally the same to drive, with only minor differences. This makes it a lot easier to jump from car to car, sure, but it definitely lessens the appeal of having such a relatively large roster of vehicles to choose from.

When it comes to presentation, it’s largely similar to the 2019 entry. Races have a festival atmosphere with fireworks exploding at the finish line, neon lights everywhere and a live PA announcer reacting excitedly to incidents beneath the roar of the engines. But despite it appearing on current generation consoles for the first time, it still feels like an upgrade over the last generation, rather than a major new graphical step forward.

However, the game does run silky smooth on a PS5 and the visual quality is definitely there with the colourful circuits which can all be raced in a myriad of weather and lighting combinations. Don’t be disappointed by the lack of a photo mode for capturing those chaotic moments – Codemasters have confirmed one will be patched in after release.

On PlayStation 5, the haptic feedback is disappointingly muted. The adaptive triggers do help you to feel like you are jamming the brake pedal at high speed, but with all the action going on, the rumble sensations are hardly noticeable at times.

Should you rush out to drop £60 on this new release? It’s difficult to say. If you’re well familiar with the 2019 reboot, there’s definitely a better game here – but it’s hard to justify paying full price for an experience you’ll feel largely familiar with unless you particularly love Grid’s style of action. There’s plenty of content here, but due to the short bursts of racing action the game is designed around, you might find it all starting to feel a little repetitive – especially as you have to check off events to unlock the ability to customise your cars.

With the racing game behemoth that is Gran Turismo 7 just around the corner, it’s a brave time to be releasing a game like Grid Legends. However, in a game industry that has leant more and more towards authentic, realistic depictions of motorsport in recent years – something very welcome indeed – it’s also pleasing that someone is still willing to produce a more casual title where the emphasis is on unabashed fun.