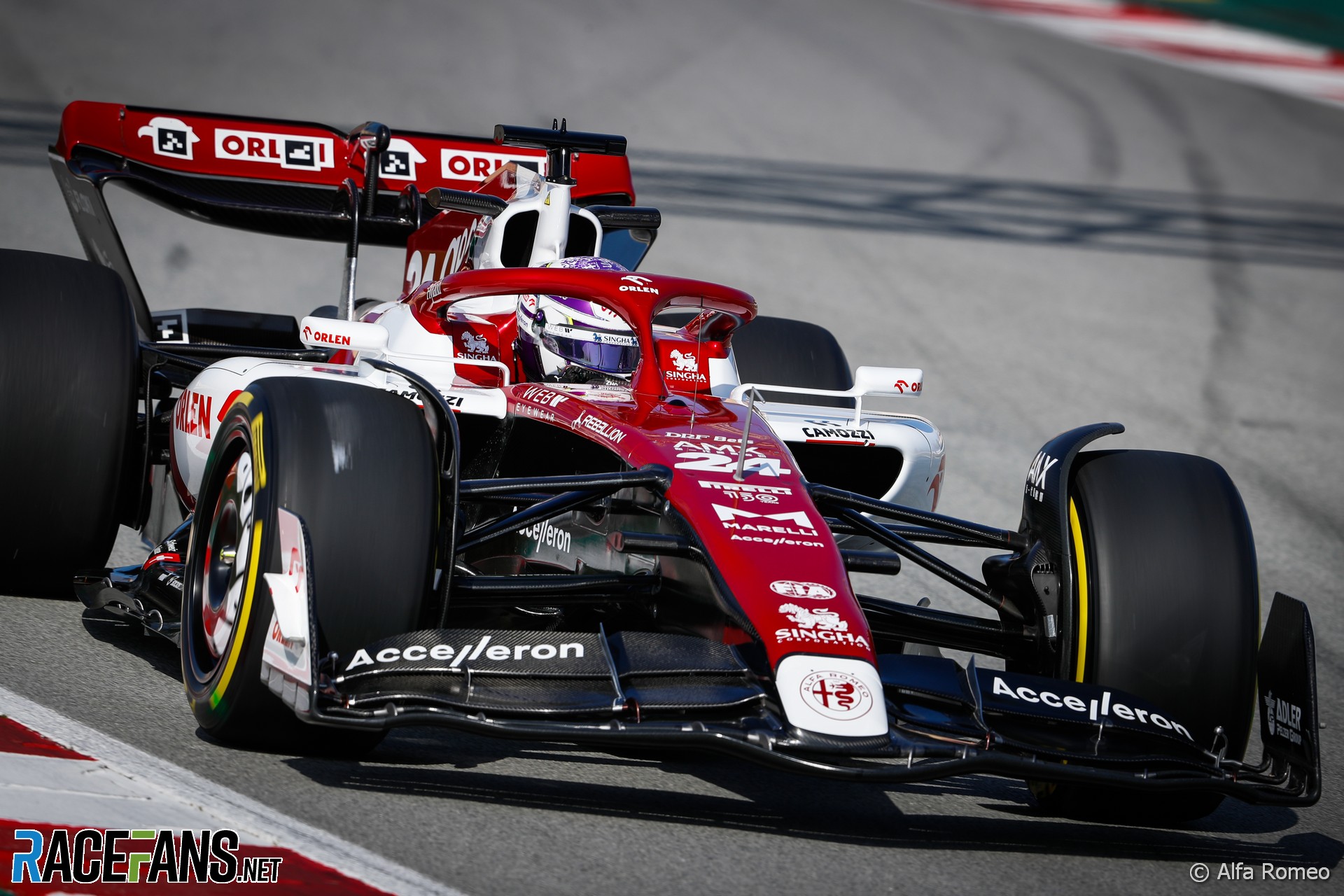 In the round-up: Alfa Romeo’s technical director has said that F1 teams will quickly get the porpoising problem seen in Spain under control.

Alfa Romeo Barcelona issues can be fixed for Bahrain

Jan Monchaux, Alfa Romeo’s technical director, said that despite setting the fewest laps of any team during Barcelona testing, he was confident that the situation could be turned around by the time of the Sakhir test.

“It was [not] a secret that we had some bouncing issues at the beginning,” admitted Monchaux, “and it was true, I think, for everybody. And we had some mechanical issue on the second part of the test.

“We have to to fix it, I think it’s a challenge but I’m quite confident that we’ll be able to do it for next week.”

Monchaux said that Alfa Romeo would be able to make use of a filming day for some additional checks and that “for Bahrain, I think that will be on the right way.”

He added that he didn’t believe the porpoising issues all teams had been having would persist far into the Formula 1 season, “it’s always the case with new regulations, you have new issues coming in. I think in two or three races, nobody will speak again about bouncing, we will have another issue or topic to discuss, but we have to fix it.

“We saw that on our side and for the other teams that everybody met big improvements over the first three days and we’ll come back next week. All the teams with a new configuration to fix it completely.”

Felipe Drugovich set the fastest time during Friday’s Formula 2 test with a 1’44.911 around Sakhir. He was almost a second clear of second-fastest driver Clement Novalak, who ran a 1’45.883.

Both times were significantly slower than previous day’s best as only the slower, hotter morning session ran due to a sandstorm arriving in the afternoon and thus the dusk session being cancelled, after Formula 3 had struggled to run in the start of the storm.

Isack Hadjar went fastest in today’s F3 running, setting a 1’47.247 for Hitech during the morning session, before a sandstorm heavily disrupted the afternoon running. A complete rookie to Formula 3 for 2022, Hadjar was fifth in last year’s Formula Regional European Championship.

He was also the fastest driver during Thursday’s uninterrupted running, setting a 1’47.516.

W Series has announced the CortDAO team, with Fabienne Wohlwend as its first confirmed driver. The team is made up of a group of crypto backers that have formed a decentralized autonomous organization to, in theory, lead the team. Another confirmed team, Quantfury, is also crypto-associated, as a financial exchange.

Veloce, the 2021 champions with Jamie Chadwick, have not been confirmed as a team for 2022.

I’m with @GrahamRahal here. The safety improvements that the aeroscreen gives easily outweighs the negatives. Yes it’s made the car a bit heavy but setup and driving wise it’s not a big difference to before (for me at least). I’m happy we have it in @IndyCar and hope it stays. https://t.co/f8mhhUvrS1

Didn’t talk to me….. Aeroscreen provides a layer of safety that I, especially as a new father, appreciate and love. It has not been that detrimental to setup. It’s heavy and hot, but man up and drive the damn thing. It’s the same for all of us. @wbuxtonofficial https://t.co/PeI5DP8O4a

Garcia set her test-topping lap in the first session of Friday morning, going a massive 3.219s faster than next-best Powell and with another nine tenths to Moore and Kimilainen in third and fourth.

The Ferrari with which Michael Schumacher lost the 1998 F1 World Championship in the Suzuka showdown to McLaren’s Mika Hakkinen is up for private sale with an asking price of USD 4.9 million.

After the Russian Grand Prix contract was terminated this week, Kimberley Barrass asks if this could spell a potential end to the national anthem ceremony at the start of a grand prix, too?

Does this mean we can get rid of the jingoistic national anthem and dignitaries at the start of the race now? This was introduced as a clause in the original Russian contract – something that no one else had – which was quickly normalised by doing it everywhere.

I can’t stand it. It was always about sportswashing with Russia, and I’m sure a lot of other countries we go to jumped on board for geo-political reasons. This is right across the board – the US (and that dreadful – introducing the drivers rubbish they did once) as well as others.

While I’m on a rant – When we go somewhere to race – I want to know the history of the circuit and how good it is – I couldn’t care less about which country it is in and wish we’d stop talking about it in our coverage generally.

It’s why I know Le Mans, Bathurst, Laguna Seca, etc – despite the fact F1 doesn’t go there, and it’s why I love COTA (this looked like it was going to be good from when they were building the track – as it obviously was no Tilke clone) and think Baku is pretty darn good as well. Singapore has had a couple of good races too – but tends to be because of madness rather than the scintillating track.

Sort it out F1!
Kimberley Barrass