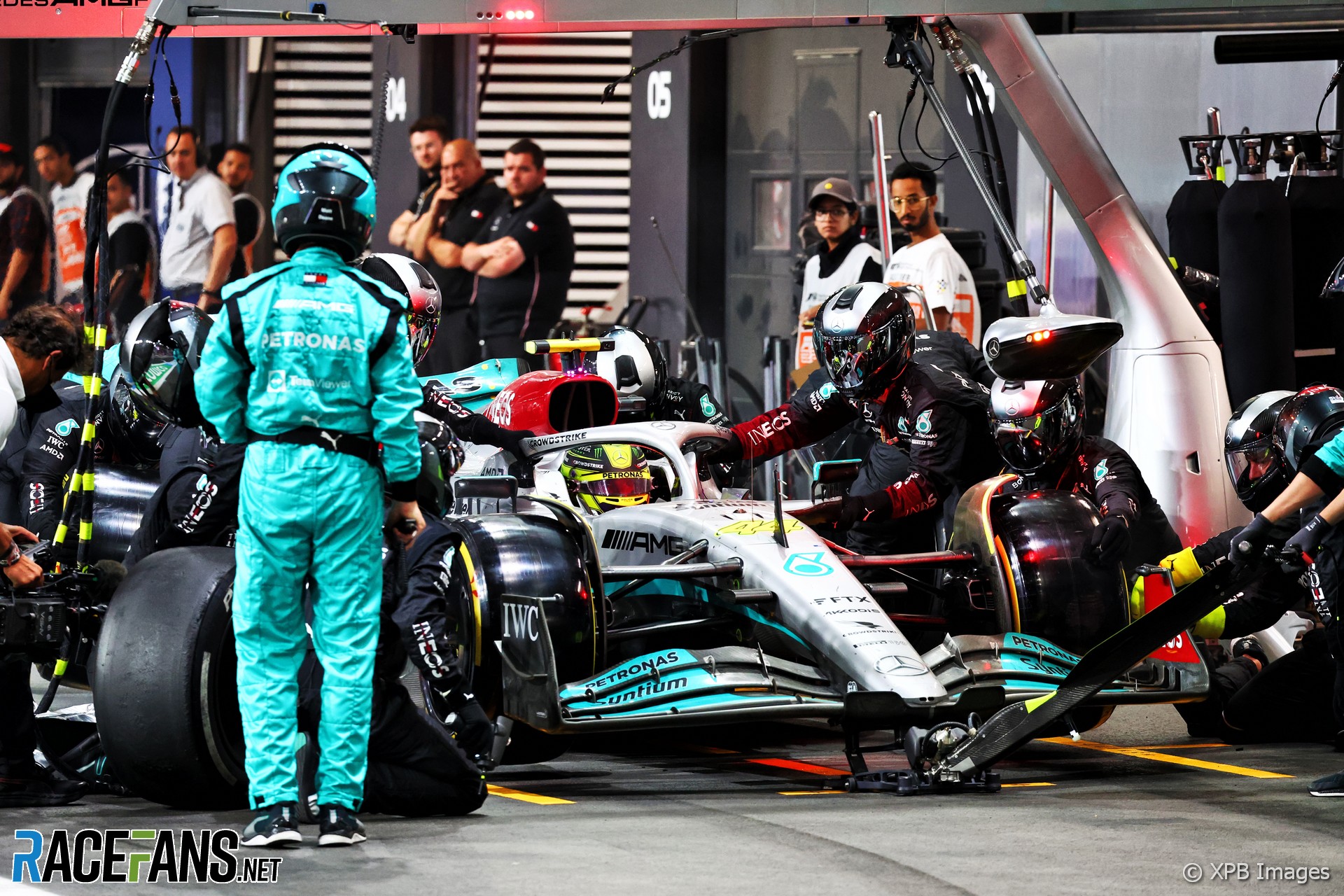 Lewis Hamilton’s efforts to salvage a decent points haul from 15th on the grid were undone when he missed a vital opportunity to pit during a Virtual Safety Car window.

Mercedes team radio messages indicate Hamilton did not hear the initial instruction to come into the pits. The call was repeated, to which Hamilton replied “too late” after he had already passed the pit lane entrance.

Having missed his opportunity to come in, the entrance to the pit lane was subsequently closed. Hamilton therefore had to wait three more laps to make his mandatory stop, by which time the VSC period had ended, meaning he lost more places than was necessary. Having worked his way up to sixth behind his team mate when the VSC period began, he ultimately finished the race in 10th.

The VSC period was triggered when Daniel Ricciardo came to a stop on the approach to the pit lane entrance. Fernando Alonso’s Alpine had also developed a problem and he was touring back to the pits at a greatly reduced speed.

Hamilton had been alerted to the situation and the team reminded him he was in his ‘VSC window’, and therefore should be ready to pit in the event one was triggered. He received his first instruction to pit – “box, box” – as he rounded the final corner, which he did not acknowledge:

As Hamilton approached the pit lane entrance, where Ricciardo had come to a stop, he was told again to pit. This time he responded “too late” as he passed by the entrance to the pits.

Two other drivers were in the same situation as Hamilton. Like him, Kevin Magnussen and Nico Hulkenberg had started the race on hard tyres and had opted not to pit during the earlier Safety Car deployment. For them, the later VSC period was a golden opportunity to make a low-cost tyre change.

Magnussen, the next driver behind Hamilton some seven seconds back, made it in. By the time Hulkenberg arrived, Alonso’s Alpine was also crawling into the pits. Hulkenberg crossed the pit lane entry line in order to ensure he got into the pits:

Drivers ordinarily have to stay to the left of the white line when they enter the pits. However, the race director’s notes for the event specify exceptions can be made:

“For safety reasons drivers must keep to the left of the solid white line immediately prior to the pit entry when they are entering the pits.

“Except in the cases of force majeure (accepted as such by the stewards), the crossing by any part
of the car, in any direction, of the painted area between the pit entry and the track, by a driver who,
in the opinion of the stewards, had committed to entering the pit lane is prohibited.”

With one car stopped on the approach to the pits, and another driving in slowly, this seemingly qualified.

Did Hamilton fail to hear the original message to pit? Or did he hear it but decide out of an abundance of caution not to pit? RaceFans asked Mercedes team principal Toto Wolff why Hamilton seemed not to have responded to the initial call for him to pit.

“Obviously Alonso slowed down during the lap, Ricciardo broke down in the entry and we told him to come in,” Wolff explained. “But there was a double yellow, a car that’s slowing down, one stationary.

“So it was just an overall confusing situation and he drove by, slowing down because of the confusion, and that made us come out behind Magnussen and obviously then it’s game over.”

Hamilton certainly had good reason to be circumspect as he approached the scene and could see Ricciardo standing up in the cockpit of his stationary car.

However, the team had advised him to be ready to pit and reminded him to be sure the pit lane entrance was open. Had he been as aware of the rules as Hulkenberg was, he should have felt confident to enter, though it bears pointing out the Aston Martin driver had a lot longer to consider his decision to pit.

Perhaps the memory of his experience at Monza in 2020 had a bearing. On that occasion he came in to a closed pit lane and picked up a hefty penalty as a result. Moreover, if he had watched Saturday’s Formula 2 sprint race, Dennis Hauger’s experience might have undermined Hamilton confidence in the enforcement of this area of the rules.