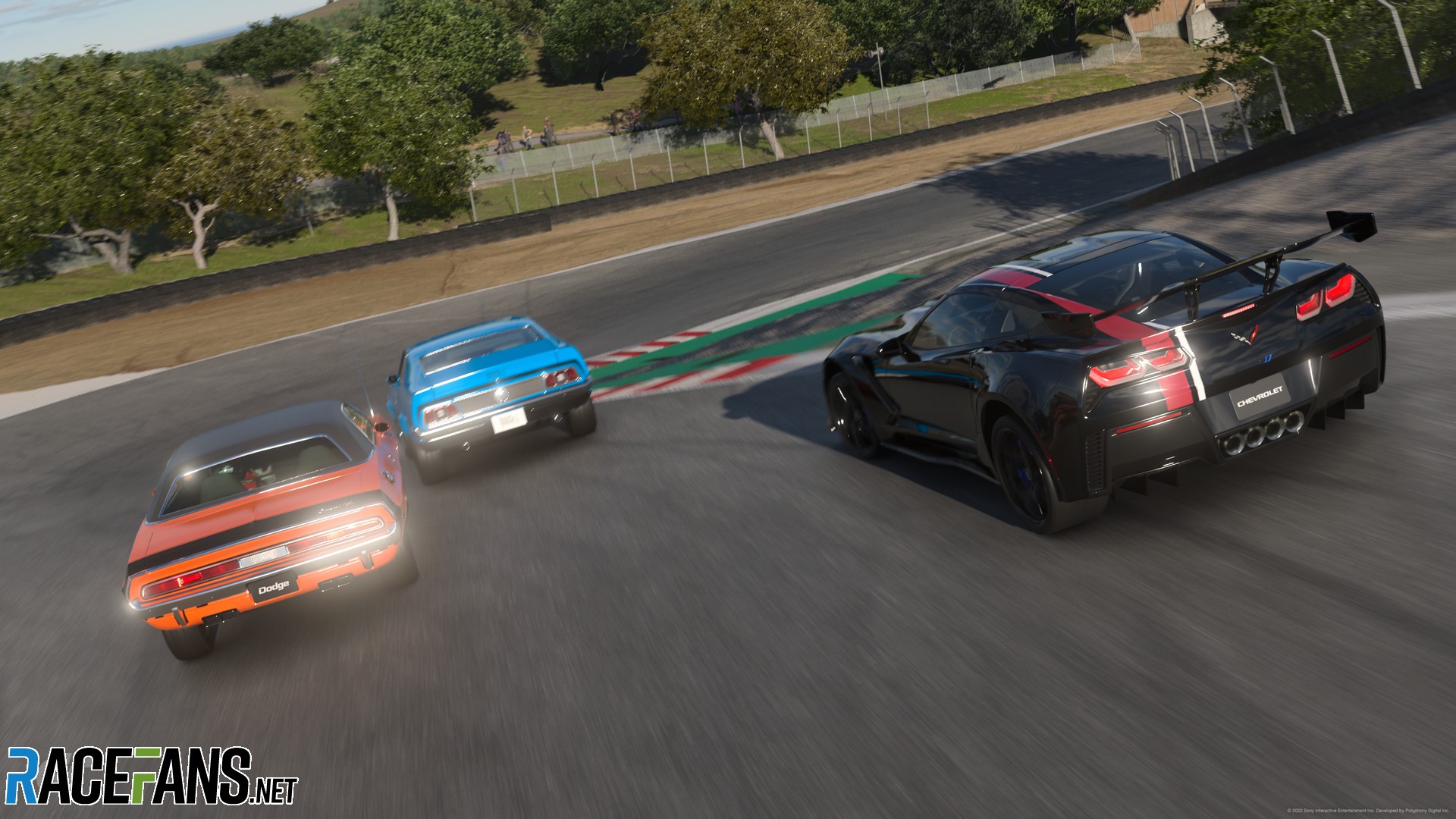 The sun has barely set on March and yet Gran Turismo 7 could very probably remain the single biggest racing game release of 2022.

But despite topping the UK and Japanese box games sales during launch week and earning nines and tens in reviews from some of gaming’s most respected media outlets – although not from RaceFans – March was perhaps the most challenging month developers Polyphony Digital have ever endured throughout 25 years of the seminal Sony racing franchise. All because of how the £69.99 game pushes players towards microtransactions.

Putting aside general gameplay grumbles about the single player café mode, the lack of dedicated races for Group 2 (Super GT) and Group 1 cars (LMP1 and hypercars), there’s one major complaint with GT7 that players have been so vocal about that it has become one of the biggest gaming stories of the year so far: its controversial in-game economy.

As EA Sports – pioneers of the lucrative Ultimate Team mode – prepare to unveil Codemasters’ F1 2022 to the world, there’s been no indication yet that the new game could feature more microtransactions than before. So will the furore over GT7 act as a cautionary tale for EA, given the gaming giant’s love of building their other major sports games around buying in-game currency with real life cash?

Gran Turismo has always had a central loop at its core: buying (or winning) cars, tuning them up and racing them. In GT7, most cars have a reasonable asking price. Fancy supercars like the Honda NSX cost a couple of hundred thousand credits, purpose built GT3-spec race cars will cost you just under half a million, while thoroughbred racing prototypes like the Toyota TS050 LMP1 car or a Super Formula single seater demand an even million for the right to own.

However, not all cars are available to purchase at will. Some older models are locked behind the ‘used car dealership’ where only a selection of cars are available at any one time and rotate throughout the week. High-end luxury cars like the Bugatti Veyron 16.4 or the Lamborghini Veneno even require players to win an exclusive invitation, earned at random, to be allowed to buy them in the first place.

On top of this, the handful of special historic cars that the game consider the most desirable – like the Le Mans winning Mazda 787B or the GT500-spec, Castrol-liveried Toyota Supra – are limited to the ‘Legend Cars’ dealership, an exclusive showroom where specific models can reach eye-watering prices of over 10 million credits in some cases.

This seems perfectly reasonable, as you’d likely assume the game’s reward system will be designed in such a way where these legendary cars act as the ultimate reward for investing your time in playing and progressing through the game. Sadly, that is far from the case.

While GT7 practically trips over itself to throw prize cars at players through the main café campaign, once that’s over, there’s virtually no effective means of earning big money by playing the game alone. You can redo the later championships and earn around 400,000 credits for completing the GT World Championship, but that will take you around an hour at least to do.

Soon after release, players calculated the most efficient way to earn credits was to complete one specific rally race in the game over and over again, earning 97,000 credits roughly every four minutes of game time. With around 50 minutes of grinding the same racing event non-stop, players could earn around one million credits – still far short of the 18,500,000 asking price for the McLaren F1 road car.

Then, following a more than 30 hour server outage that prevented anyone who owned the game from playing the core single player mode, Polyphony Digital released a patch for GT7 that “adjusted” many of the reward payouts for events in the game – including more than halving the base rewards for the most lucrative rally event players had been monotonously grinding the week prior.

Now, players could only earn a maximum of 52,500 credits, meaning it would take over an hour to even get close to a million credits. And to save up the 18 million needed for a McLaren F1 would require a time investment far beyond what your average player would be willing to make, just for the right to drive a single car.

But if players do not want to spend their time grinding their way to earning these legendary cars, they do have a much faster method – microtransactions.

Unlike with GT Sport, GT7’s predecessor, where players could simply cough up £2.49 to immediately buy any single car they wanted, only credits can be purchased with real world money in this latest edition. A pack of 100,000 credits can be bought for just £1.99, with the maximum amount of two million credits costing £15.99. To buy the 18.5M credit McLaren F1, players would have to shell out the equivalent of £147.91 of microtransactions to buy the game – over twice the price of the entire game itself on release.

Gran Turismo creator and Polyphony Digital president Kazunori Yamauchi explained his team’s logic behind the move in an open letter to the player base after the patch released, explaining that “the pricing of cars is an important element that conveys their value and rarity,” and so he believed that it was “important for it to be linked with the real world prices.

“I want to make GT7 a game in which you can enjoy a variety of cars lots of different ways and if possible would like to try to avoid a situation where a player must mechanically keep replaying certain events over and over again,” Yamauchi continued, promising to add additional racing events to the game over time.

The Gran Turismo player base did not seem to take kindly to this explanation. Some owners requested a refund from Sony of their digital copies and were granted one – even despite logging many hours of play time. The game was review-bombed on review site Metacritic, with hundreds of users posting 0/10 review scores to tank the game’s average user review score, making GT7 the lowest rated first-party Sony game in the site’s history.

In response to the outrage, Yamauchi later announced that GT7 would receive multiple content updates beginning in early April, increasing race rewards, adding hour-long endurance races into the game with larger payouts, adding more cars to the limited rotation and giving players the ability to sell their unwanted cars for credits in the future. It’s a welcome first step in what is hoped will be a long lifespan for GT7, but whether it is enough to gain back goodwill from the players remains to be seen.

With such a visceral player backlash against microtransactions in a full priced racing game as big as Gran Turismo, there’s plenty for EA Sports – the publishers of the official F1 game developed by Codemasters – to think about as F1 2022 heads into a crucial stage of development.

From the moment EA first announced they would buy the British studio a year ago, players have not been shy with their concerns about how the publishing giant might try and monetise the F1 franchise. At the heart of these worries lies the fact that EA Sports pioneered the divisive ‘Ultimate Team’ concept across its FIFA football, Madden NFL and NHL games, enjoyed by millions of players but maligned by perhaps just as many critics of the mode.

At its core, Ultimate Team works similarly to a trading card game. Players earn and trade packs of cards representing real life sports stars on the field, which they can then use in their in-game team. Over time, players fight to earn the most prestigious and top rated cards – such as Ronaldo in FIFA or Aaron Donald in Madden – to make the strongest possible team to compete against the squads of other players online in competitions.

While users can earn highly desired players through playing the game itself, they can also take a shortcut by buying in-game booster packs, giving them a random assortment of players set to specific rarity odds, with actual money. With some players spending hundreds and even thousands of pounds each year in the mode, it’s no wonder why Ultimate Team has become the mode that receives the most attention with each new instalment of an EA Sports title.

To say it’s a lucrative business for EA is to massively undersell how much of a money maker the mode has become, with Ultimate Team modes accounting for almost 30% of EA’s overall revenue during financial year 2021. That’s almost a third of the entire revenue generated by Electronic Arts – a publisher that boasts Star Wars, The Sims and other incredibly popular properties under the umbrella.

Currently, the F1 game does not have an Ultimate Team equivalent mode. Instead, F1 2021 features the ‘Podium Pass’ – inspired by the battle pass system used in popular shooters like Call of Duty and Fortnite. The Podium Pass gives players 30 tiers of cosmetic content – such as liveries, helmet and racing suit designs, podium victory animations and more – to unlock every few months by playing the game. There are two tiers to the unlockable content. The ‘free’ tier has a basic selection of items and does not provide rewards for every level unlocked. If players purchase access to the ‘VIP’ tier using in-game Pitcoin currency, they gain access to unlock all the rewards available in the free tier, plus a range of more desirable items unlocked at each level up to the maximum.

The rewards offered by the Podium Pass may be purely cosmetic, but they have their critics. Most recently, the last two series of the Podium Pass have featured almost exclusively items inspired by content creators who regularly play and stream the F1 game on their YouTube and Twitch channels, such as tiametmarduk, Aarava and Pieface23. If you aren’t a fan of Pieface23’s particular brand of streaming humour or the “absolute scenes” regularly found in Aarava’s F1 game videos, there’s not much likely to appeal to you in the most recent series of the Podium Pass.

Unlike in Gran Turismo, players can earn enough Pitcoins through unlocking tiers in the VIP tier of the Podium Pass to unlock the following series without any further microtransactions. If a player buys the deluxe edition of the game at launch, they receive enough Pitcoin to buy the VIP tier for the first Podium Pass series of the game – theoretically meaning that a player who buys the deluxe edition of F1 2021 can unlock everything in each Podium Pass series without ever needing to spend a single penny on microtransactions.

As F1 2022 will be the first entry of Codemasters’ long-running official F1 franchise to be released after having its full development cycle under the ownership of EA Sports, fans of the game are cautious about how much this year’s entry may differ from those before it – especially when it comes to monetisation. However, at this stage, there has been zero official indication from either EA or Codemasters that F1 2022 will take any different approach to microtransactions. EA CEO Andrew House also said the publisher would allow Codemasters to “continue to be who they are” under their ownership in an interview with MCV, raising hopes that future games will not push microtransactions as a core element of their design.

With official news about the newest upcoming edition the official F1 game expected in the near future, it seems that those who have been nervous about what EA’s ownership of Codemasters could mean for the game will soon see if their fears will be realised. Hopefully, when F1 2022 is released, it will avoid unnecessarily upsetting its core player base as Polyphony Digital appear to have done with GT7.