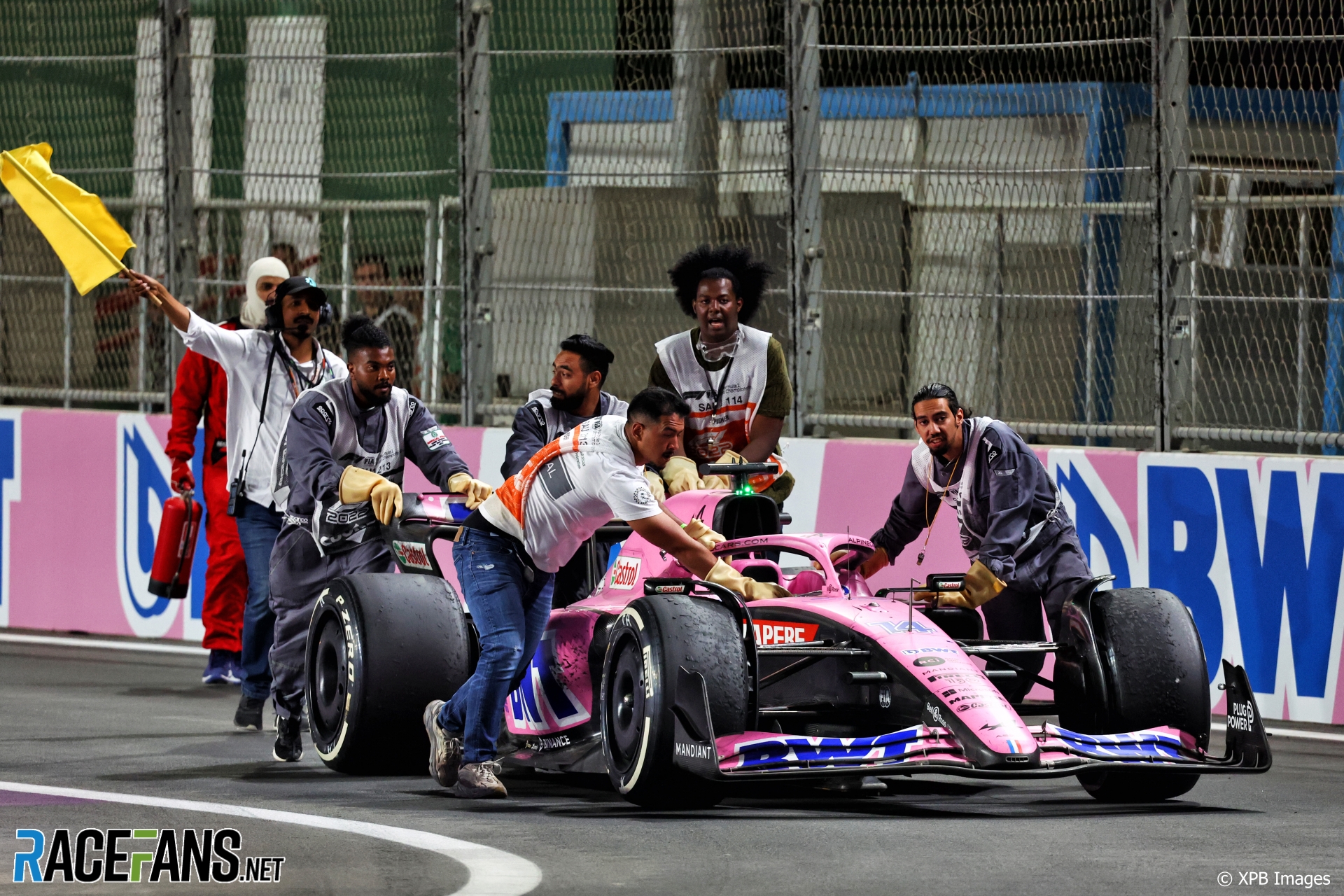 In the round-up: Fernando Alonso will not be able to re-use the engine which suffered a failure in Saudi Arabia, leading to his retirement.

Alpine CEO Laurent Rossi says that Fernando Alonso has lost his first engine of the season after his retirement from the Saudi Arabian Grand Prix.

Alonso was forced to retire midway through the race after a ‘cool the car’ warning message suddenly appeared on his steering wheel. Rossi says that a water pump problem has led to Alonso’s ICE being no longer usable.

“The problem is that this part (water pump) is integrated into the engine, the water pump degraded and fell into the workings of the engine,” Rossi told French publication AutoHebdo.

“If we wanted to repair the engine, we would have had to break the seal and so we have lost that engine. Even if its physical integrity wouldn’t be affected, it’s one less engine for us.”

Formula One Management’s latest gender pay gap report revealed that the commercial rights holder paid its employees who are women an average of 19.1% less than men in financial year 2020-21.

In its latest gender pay report, which all large British-based companies are required by law to provide, Formula 1 disclosed that its workforce on April 5th 2021 was made up of 68% men and 32% women, an increase of 4.13% representation of women since 2019.

On average, women employee’s mean hourly pay was 19.1% lower than men’s. However, this is a shorter gap than April 2020, where the mean pay gap between women and men was 24%.

In their report, FOM said that the organisation “will remain focused on this important issue, and we are confident in the actions we are taking to improve female representation in our business and look forward to reporting further progress in the coming years.

“We are committed to making further progress across all these important areas and are fully committed to ensuring Formula 1 continues to attract and retain the best talent regardless from a wide range of backgrounds and experiences.”

Ferrari team principal Mattia Binotto says that the team are no longer disadvantaged by their power unit compared to their rivals.

Ferrari suffered their worst season for 40 years in 2020 after they had to redesign their power unit after reaching an agreement with the FIA over legality concerns. The team won the opening race of the season in Bahrain and lead the constructors’ championship after two rounds.

“As we often said last year, we got a disadvantage that we tried to catch up,” said Binotto. “If we look at the data today, we are certainly more in line on the first two races on the analysis we’ve done so far.

“It seems that between manufacturers, between power units of different manufacturers, the difference is very little. [campaigning as if we are really reaching some of the convergence.] So while it was a disadvantage for us last year, it’s not anymore.”

Get to know our only rookie on the grid, @ZhouGuanyu24! #F1 @alfaromeoorlen pic.twitter.com/gHMGft2bcn

David Coulthard: "He has speed, he has excellent communication skills. He’s a modern version of a top professional racing driver. I thought that before the season started and I’ve seen nothing since to change my mind."

Helmut Marko: "If we experience a 'crash' like in 2014, when we had absolutely no chance against Mercedes on the engine side, then it’s clear there is an escape clause."

"Mercedes would be the first to admit that they haven't got it right. Ferrari have done a really good job in moving up and being right there with Red Bull. But I would expect that to change now more than any other year as people find big chunks of performance in lots of different areas."

"Across the four seasons, women speak for a total of 40 minutes, compared to the total runtime of 1,524 minutes (over 25 hours), according to calculations by Females in Motorsport. There is little variation between the earlier and later seasons."

"It’s been a long and winding journey for the Red Bull F1 team since it launched in 2005. There’s been a lot of change, using engines from Cosgrove, Ferrari, Renault and Honda. And of course, a growing list of drivers has come and gone."

Should F1 increase its maximum cap of 24 races a season? Reader Robert believes it is best to leave fans wanting just a little bit more…

I once thought that more would always be better, that a race every week all year round would be perfect. But I have started to believe the perfect amount is when you feel that it’s just short of perfect. That feeling of wanting a bit more is what keeps the interest up, what builds the anticipation and drives you to spend your valuable time on it. As humans we always want more, but when we get it we just want something else instead.

I find myself not wanting much more now, so what we currently have is probably really close to pushing it too far already.
Robert

30 comments on “Alonso down one engine after Jeddah retirement”