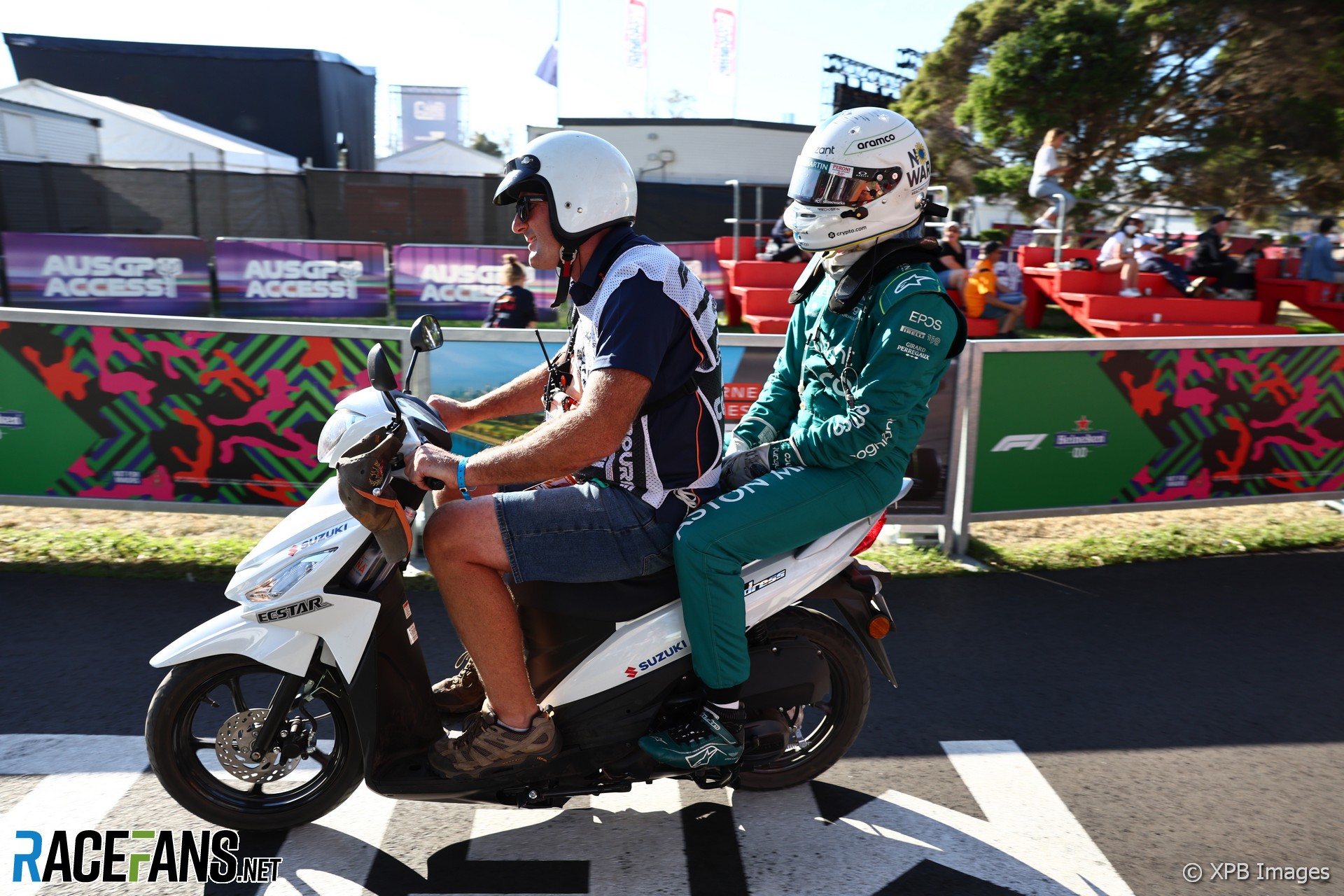 Sebastian Vettel had little cause for cheer after a weekend to forget on his return to racing in Australia.

The Aston Martin driver missed the first two races of the season after contracting Covid-19. But having driven the team’s AMR22 in a shakedown and two pre-season tests, he didn’t have any concerns about getting back up to speed before the weekend began.

“We had a decent test, we had more tests than last year in a way,” he said before practice began on Friday. “It’s not too long ago, but for sure I missed the race rhythm. It’s obviously a disadvantage not to have had those two races and race with these cars but I think it will be okay. I’ve done this before, so should be okay.”

However he covered just 18 laps that day as he was sidelined by a power unit failure at the end of first practice which prevented him from participating in the second. He also fell foul of the stewards, who fined him for riding a moped onto the track to get back to the pits.

Matters took a turn for the worse on Saturday. Already less than happy with the balance of their car, the FIA’s 11th-hour decision to remove one of the four DRS zones, confirmed shortly before final practice, threw another spanner in the works.

“The frustrating bit was that we were notified quite late about the whole difference,” said team principal Mike Krack. “There is a big implication of this because as soon as you remove the DRS zone there we were concerned that we would run into more oscillation issues.”

Aston Martin weren’t the only team affected in this way, said Krack. “You could see it also with other cars. I think the interesting bit was there was nobody running in the first 15 minutes of free practice three. So there was a lot of people who had a bit of work to do.”

However Vettel only managed a handful of out-laps before crashing. With team mate Lance Stroll also hitting the wall, Vettel’s participation in qualifying was in doubt. Ironically, he was only able to join in when Stroll’s repaired car was involved in a further crash in Q1 which triggered a lengthy stoppage and allowed Vettel’s mechanics to complete their rebuild. That left him 17th on the grid.

The race at least offered him the opportunity to log a significant number of laps in his car. But a rough afternoon came to an end before half-distance.

Having qualified near the back he was one of few drivers to start the race on hard tyres. As Alexander Albon demonstrated, a long stint on that rubber could work. But as Carlos Sainz Jnr demonstrated, they were also tricky to warm up.

Vettel fell foul of them on lap nine, shortly after the first restart, ploughing the gravel at turn 11 and falling to last place. “Sorry for that,” he told his team on the radio.

“That was a big tailwind there Sebastian, bigger than the previous lap,” his race engineer Chris Cronin advised, “30kph tailwind.”

As he pushed to catch up with his team mate and the rest of the tail-enders, Vettel told his team the car felt “a bit on the nose through the high-speed, understeer medium-speed.”

By lap 22 drivers ahead were beginning to pit and emerge in Vettel’s mirrors. Albon, who went on to take a point, was just two seconds ahead. But Vettel wouldn’t make it to the chequered flag.

On lap 23 he ran fractionally wide at turn four, lost control of his car on the exit kerb and was spat onto the barrier at the inside. The utter dejection in his voice as he prepared to climb out of his car spoke volumes.

Vettel has been through tricky times in recent years. His final season at Ferrari was a dismal season marked by a growing number of unforced errors.

His first season at Aston Martin last year began unpromisingly, but improved, eventually yielding a second-place finish in Baku plus another on-the-road in Hungary which he lost to a technical infringement. But the combination of an enforced absence due to Covid-19 plus a problematic car made trickier by the late DRS changes in Melbourne added up to a tough first weekend back.

Krack, who was Vettel’s race engineer when he arrived in F1 16 years ago, has faith in his driver, and believes the team needs to look at the equipment it gives him.

“We really take something away from it,” he said after the race. “I’m happy that Seb is fine, first of all, after all these incidents.

“But I think if someone like him, a four-time world champion, has these issues that he was having this weekend, and this is not down to not driving, because he has driven the car. This is something that we need to really look at what car we provide him, what feedback he gets from the car.

“Because, you will agree with me, that him being off so much as he has been this weekend is not normal and I do not think that this is related to having missed races. He has been a multiple winner in Melbourne, he knows where he is here. He has had some tests with the car, so I think it would be really easy to say he was not there for two weekends.

“A driver of that class, we really need to check what tool we are giving him.”