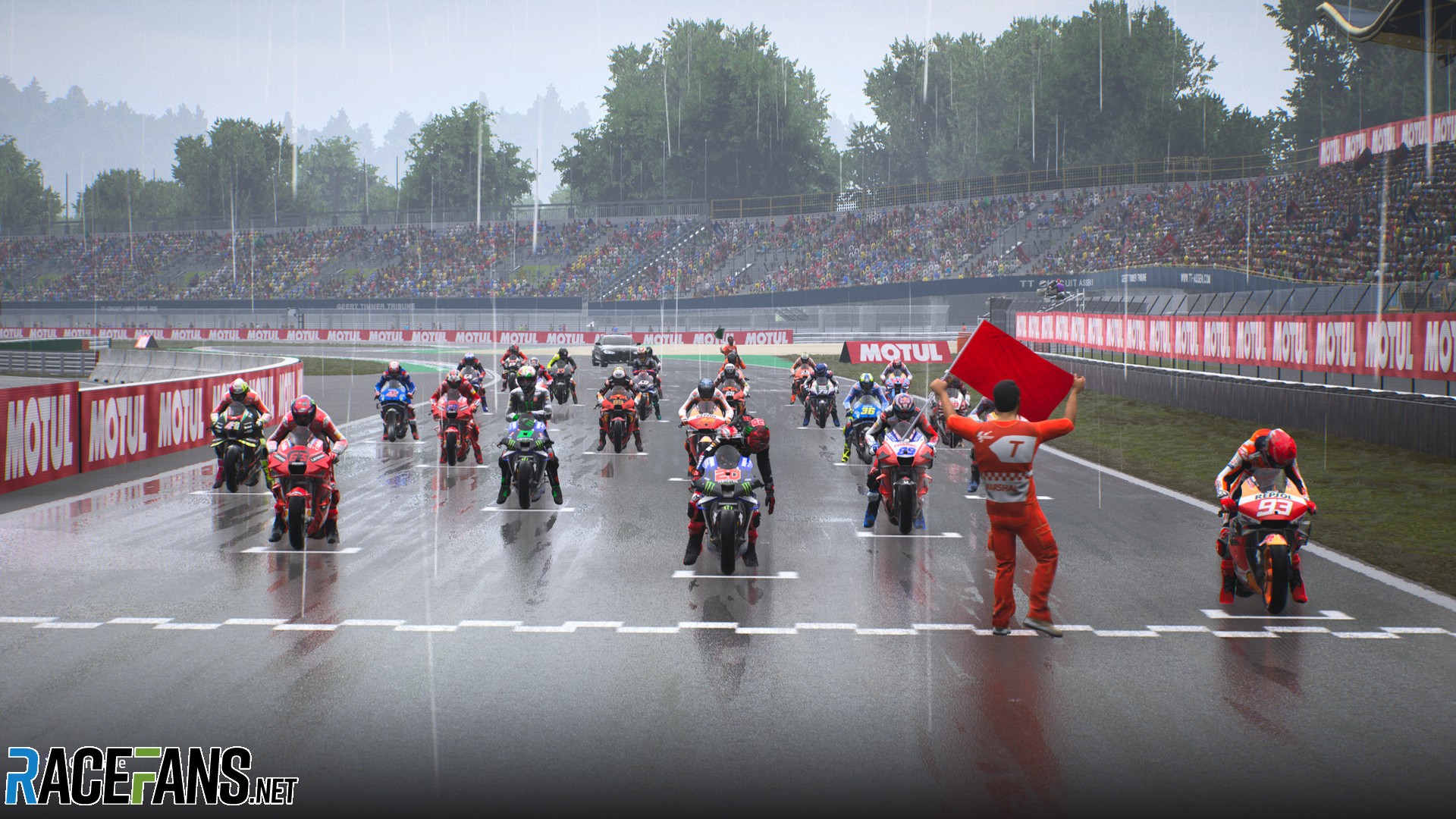 The 2022 Moto GP season has only just reached Jerez for the first of its many rounds held in Spain and already fans of the series can enjoy the official 2022 Moto GP game on almost all the most popular formats.

Over the years, the Milestone-developed official Moto GP game series has steadily grown into perhaps the most underrated major licenced racing franchise on the market. Of course, hardcore Moto GP fans will have plenty of gripes about the series and some of the minutiae of the gameplay, but from the accessibility for newcomers, the depth of challenge offered by the handling model and the volume of content available, the Moto GP license has never been in better hands than with Milestone.

Just days ago, the series announced Milestone would continue to hold exclusive licencing rights for Moto GP games until 2026. So what’s new with Moto GP 22, the second edition of the game released on current-generation hardware and is the investment in a brand new entry worth it for those who already own Moto GP 21?

For a start, it will come of little surprise to learn that Moto GP 22 is another evolutionary step in the series and not a dramatic reinvention on a whole new game engine. If you’ve played any of the last few games, you’ll find plenty familiar in this latest version.

All the teams and riders from this Moto GP season are present, including the new Indonesian Grand Prix circuit at Mandalika, but in typical fashion, the Moto 2 and Moto 3 classes have not yet been fully updated with all the rider liveries, helmet designs and rider images. As ever, those will be added post-launch in a free update.

On track, Moto GP offers the same kind of deep and rewarding handling model it has offered over the last few years. This is not an arcade game, but an authentic light-simulation game that can be surprisingly challenging to master if you’ve never tried before. These machines are savage – especially in the premier class. Asking too much of the bike at any point, under braking, throughout the corner, on exit, or by running onto the kerbs, can unsettle the bike and cause it to completely lose contact with the road, sending your rider hurtling through the air into the gravel.

Thankfully, there are plenty of assists available to make things less of an ordeal, but even with most of the riding assists enabled, you should not expect to be able to jump onto Marc Marquez’s Honda or Jack Miller’s Ducati and start throwing yourself around the track.

Braking has been modified to try and offer a little more forgiveness than last year, which could see the more powerful machines be very difficult to slow down effectively without riding aids. A new suspension model can make the bikes more predictable over kerbs and rumble strips, but do not confuse ‘predictable’ to mean ‘easier’. New for this year, the adjustable ride height system allows you to optimise your drag on starts and out of corners with a touch of a button, even being able to pre-arm the system in a corner before it automatically activates on the straight.

For beginners, the helpful tutorial mode from last year’s game returns from 2021, teaching players all the basic and advanced mechanics in controlled tests. For those who want a bit more practice, there is now a new academy mode, which functions almost identically to the ‘circuit experience’ mode in Gran Turismo 7. Breaking down each circuit into its sectors, you can tackle each sector of a track at a time, with bronze, silver and gold target times to aim for. It’s supposed to help you learn the circuits and improve your knowledge of every section of every circuit. However, it’s unlikely to really help those already experienced to learn anything new about their technique or help them improve their times.

New for this year is the so-called ‘Riding Analysis System’, which claims to help players improve their skills by offering feedback on their performance on track. However, this amounts to pop ups after races, simply suggesting that you might want to check out the tyre management tutorial simply because your tyre wear was high in your last race – hardly the most helpful of feedback systems.

At the heart of the game, once again, is the managerial career mode. Remaining almost functionally identical to 2021, career mode allows you to create your rider and choose whether to start in Moto 3, Moto 2 or jump straight into the premier class. As you progress, you can create your own team and even start your own academy, making decisions about hiring and firing staff on the way and setting development paths for your bike on the way.

It’s certainly more detailed and deep an experience than many other racing games would provide, but it’s hard not to feel a sense of deja vu if you’ve owned any of the previous two titles. What Moto GP lacks compared to the current Formula 1 series is a dynamic rider market and progression from junior categories for younger riders. Without that, it’s hard to feel as invested long term as you progress through the seasons. One welcome option this year however is the ability to choose shortened championship options, with fewer races in a year. A handy way to help enjoy the lower categories as you progress while helping to make sure the experience never feels dragged out if you lack the time to invest.

However, the career mode is not the major focus of this latest game. Instead, Moto GP 22’s major headline feature is something no racing game has attempted to do before. In the Nine Season mode, Moto GP 22 offers players a unique lookback at one of the most memorable seasons in Moto GP history: 2009 – Valentino Rossi’s seventh and final top class title winning season.

Presented as a cinematic retelling of the 2009 championship featuring heavy use of archive footage and a documentary-style narrator, Nine Season breaks down every race of that year’s championship into its key narratives and turns those into gameplay challenges for the player to complete as they navigate through the events of the season.

What could easily have been a half-baked addition to the game for marketing purposes is actually executed with genuine brilliance. It is clear how much effort and time has gone into the Nine Season mode, with the quality of the cutscenes and the way real life footage blends almost seamlessly into the gameplay making it a truly impressive experience. Even if you have no knowledge or little appreciation for the history of Moto GP, the mode does an excellent job of setting the scene of each race and making you invested in the characters – arguably more effectively that Moto GP’s own ‘Unlimited’ documentary series managed.

Hardcore fans of Rossi, Casey Stoner, Jorge Lorenzo and Dani Pedrosa will get the most enjoyment from reliving iconic moments through gameplay, but it is still deeply rewarding to go through a specific period in racing history and relive it through gameplay. It’s wise to wait until you’re more familiar with the game before jumping into Nine Season, as you’ll be thrown into racing scenarios and expected to catch rivals or pull gaps on bikes behind on circuits and bikes that you may be completely unfamiliar with. But this is a far more meaty and substantial mode than what many could have expected and far more rewarding a journey to go through than say, F1 2021’s Braking Point mode.

As well as the Nine Season narrative mode, Moto GP 22 also includes every rider, bike and circuit from the 2009 season to race with in any of the non-career single player modes. With many historic bikes and riders from previous games returning in this year’s game, there can be few complaints about the volume of content available in the game.

As ever, the customisation features from the previous few games return, but it’s still a little disappointing to have no freedom to completely design your bike livery from scratch à la GT7 or Forza.

The game looks and sounds as pleasant as ever, making impressive use of the Unreal engine with colourful, bright image quality that the photo mode makes great use of. The use of the old Dorna TV graphics package for the Nine Season mode is an especially nice touch, while the menus and HUD feel slick and modern taking heavy inspiration from the sport’s current visual branding.

The answer to the overall question of whether Moto GP 22 is worth a full-price purchase is as ever dependent on how much of a hardcore Moto GP fanatic you are. But with all the content of 2021, small handling refinements and the addition of the super Nine Season mode to play through, it’s easy to recommend Moto GP 22 to anyone interested in picking up a Moto GP game for the first time.

With Milestone owning the rights to the Moto GP licence for the next few years, it will be exciting to see where this talented Italian development team take the series into the future.