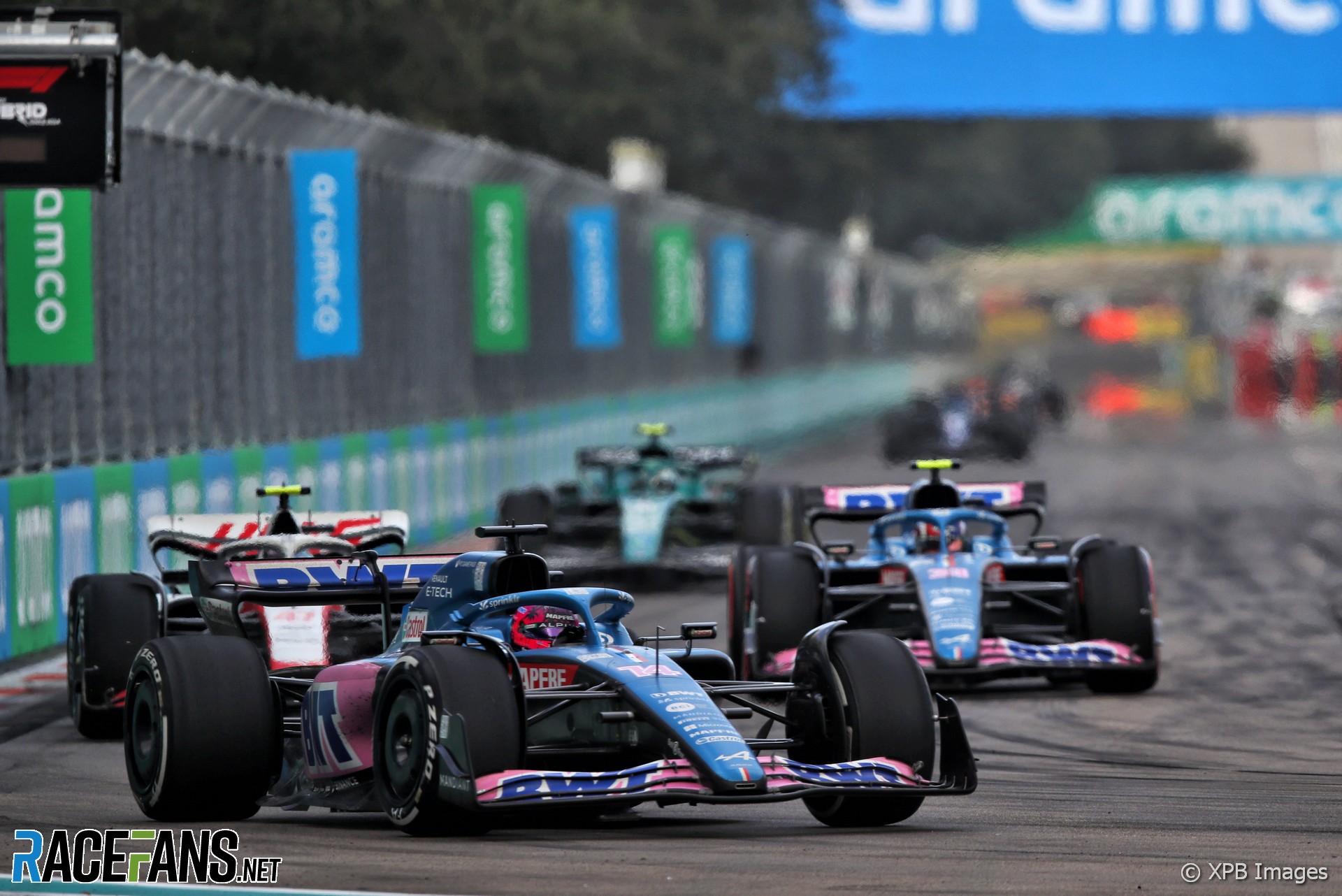 Esteban Ocon was unwilling to follow Alpine’s order to back off at the end of the Miami Grand Prix to minimise the impact of his team mate’s five-second penalty.

The team later decided the instruction had been “unnecessary”. But, in a subsequent twist, Fernando Alonso received a further penalty, which dropped him out of the points entirely.

Alonso was given his original five-second time penalty for a collision with Pierre Gasly. As the race drew to a close Alonso was leading a close train of cars comprising himself, Mick Schumacher, Ocon and Sebastian Vettel.

The sequence of events began with what may have been a cunning move by Alonso. On lap 53 he cut across the turn 14-15 chicane. While this could have been accidental, it may also have been an attempt to deprive Schumacher behind him of DRS.

Having cut the chicane, Alonso reached the detection line after turn 16 more than a second before Schumacher, who was therefore unable to use DRS. The stewards took note of Alonso’s failure to keep within the track limits.

Schumacher’s loss of DRS allowed Ocon to attack him at the next corner. The Haas driver repelled the Alpine, but Vettel came past the pair of them. As Schumacher attempted to retake the place at turn one they collided, allowing Ocon through.

Alonso’s race engineer Karel Loos updated him on the developments going on behind: “Schumacher and Vettel touched at turn one so they dropped back. Car behind is Esteban now, 2.6 seconds.”

However when Ocon was told the team wanted him to back off and hold back the pursuing Alexander Albon, he was unwilling. “I’m getting overtaken if I back off,” he told his race engineer Josh Peckett. Having seen how swiftly Schumacher came under attack when he lost the DRS, Ocon knew he might be just as vulnerable to Albon if he slowed down.

Ocon maintained his pace and asked the team to keep him updated on the situation. Alonso was building the five-second gap he needed over Albon, and as the final lap began Alpine told Ocon his team mate had enough margin in hand.

Alpine team principal Otmar Szafnauer acknowledged the team had asked Ocon to pull off a tricky feat by slowing to help Alonso. “It’s difficult to do that,” he said.

“But as it turned out, it was unnecessary because Fernando was quicker than Albon who was the first five seconds behind.”

Unfortunately for Alonso the stewards decided he had “gained a lasting advantage” with that curious turn 14-15 corner cut, and handed him a second five-second time penalty. Having originally fallen from eighth to ninth, the further sanction dropped Alonso out of the points completely.

It wasn’t the only time Alonso ran wide at that corner. Four laps later he did so again, this time with a noticeable puff of smoke as he locked a wheel. On that occasion the stewards let him off. “Although the driver of car 14 [Alonso] left the track and rejoined, the time difference to the two following cars (31 [Ocon] and 23 [Albon]) remained unchanged, thus the stewards concluded that no lasting advantage was gained,” they added.

Alpine seemingly hadn’t seen Alonso’s second penalty coming. Had they done so, would they have asked Ocon to hold Albon up by another five seconds?

Ocon rebuffed the team’s call to back off:

In the laps that followed Alpine kept Ocon aware of Alonso’s gap over Albon:

By the end of the race Alonso had the five-second gap he needed, though he lost half a second on the final tour:

RaceFans is run thanks in part to the generous support of its readers. By contributing £1 per month or £12 per year (or the same in whichever urrency you use) you can help cover the costs of creating, hosting and developing RaceFans today and in the future.