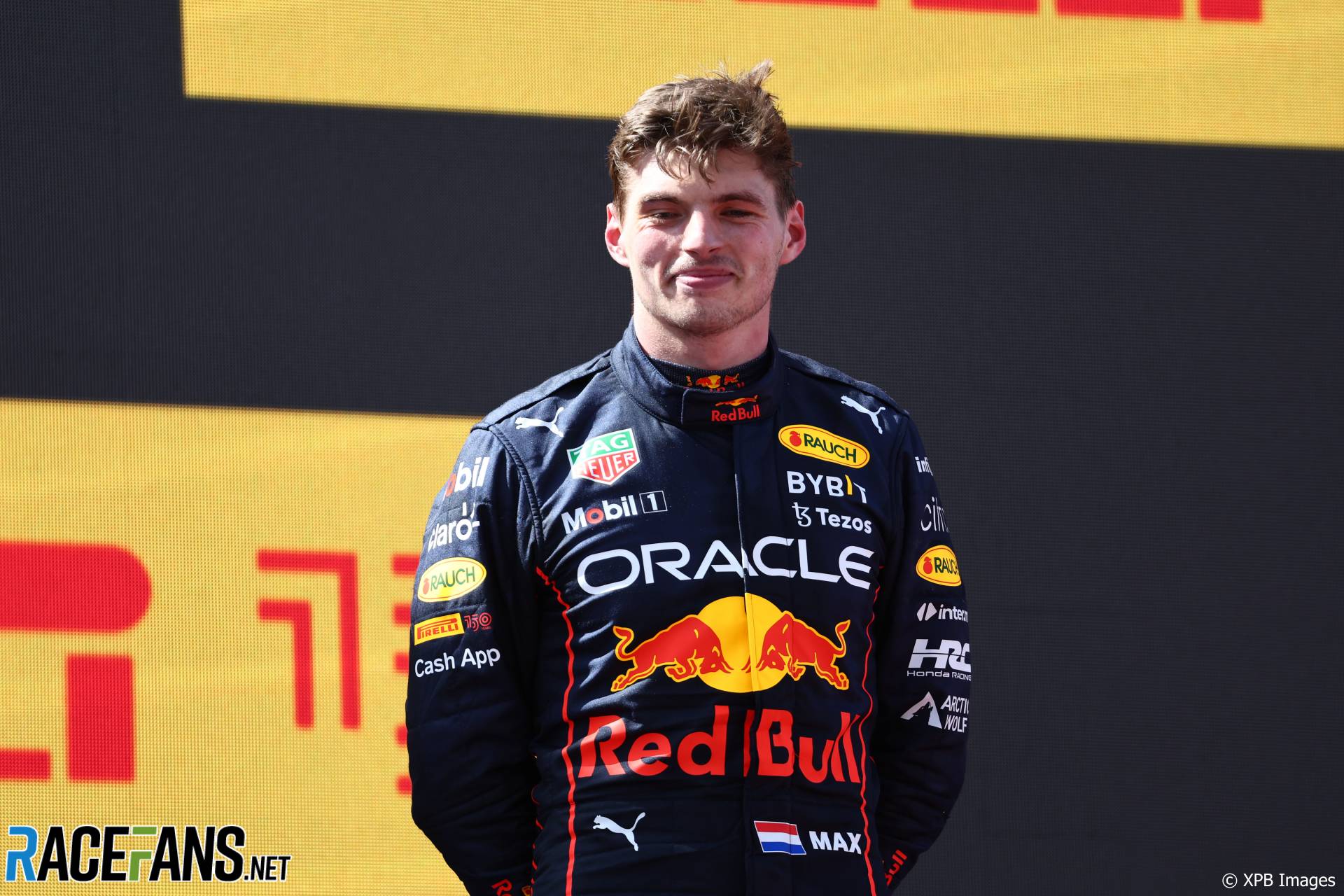 Between 1955 and 1968, Fangio held the record for the most world championship race victories. Reaching it today puts Verstappen on the verge of joining the top 10 winners in F1 history.

This was his second win at Circuit de Catalunya, six years on from his breakthrough victory at the track in his first race for Red Bull.

It puts Verstappen back in the lead of the championship for the first time since he won it last year. He sustained his run of winning every grand prix he’s finished this year, and hasn’t finished a race lower than second since last year’s Hungarian Grand Prix.

This was the third consecutive victory for Verstappen. If he wins the next race it will be the first time in his career he’s won four races in a row.

Red Bull’s success ended a near-decade of Mercedes dominance. They had taken pole position for the previous nine races at this track. They won seven of those, the others falling to Verstappen and, in 2013, Fernando Alonso, in what remains his most recent victory to date.

Sergio Perez backed him up in second place to deliver a one-two for the team, and added the bonus point for fastest lap to ensure they scored the maximum available points haul of 44.

That propelled Red Bull into a 26-point lead in the constructors’ championship – an impressive turnaround, given that three races ago they were third, 49 points off the lead.

They were aided by Charles Leclerc’s retirement, which meant he failed to score for the first time this year; indeed, it was his first no-score since last year’s Russian Grand Prix, 12 race ago, where he paid the price for staying out too long when rain hit in the final laps.

Leclerc did take pole position, the 13th of his career, putting him level with Graham Hill, Jack Brabham, Jacky Ickx, Jacques Villeneuve, Juan Pablo Montoya and Mark Webber. Like Montoya, Leclerc is the only representative of his nation to have set a pole position in F1, so Monaco and Colombia are also tied on 13 poles.

Perez’s fastest lap was the seventh of his career, which gives him as many as Leclerc, as well as Jacques Laffite.

Leclerc’s retirement leaves George Russell as the only driver to have scored points in every race this year. Indeed, he’s finished every race in the top five, and lies 36 points off the lead with up to 432 still available. Food for thought as Mercedes made a noticeable step forward with their car last weekend.

There were a couple of big climbs through the field last weekend. After first-corner contact, Lewis Hamilton rose 14 places from 19th to finish fifth, and would have been fourth had his car not suffered a water leak. Alonso started last and gained 11 places to take ninth.

But the unlucky Zhou Guanyu retired for the second race in a row. Only Carlos Sainz Jnr has covered fewer laps out of the drivers who entered all six rounds.

Have you spotted any other interesting stats and facts from the Spanish Grand Prix? Share them in the comments.