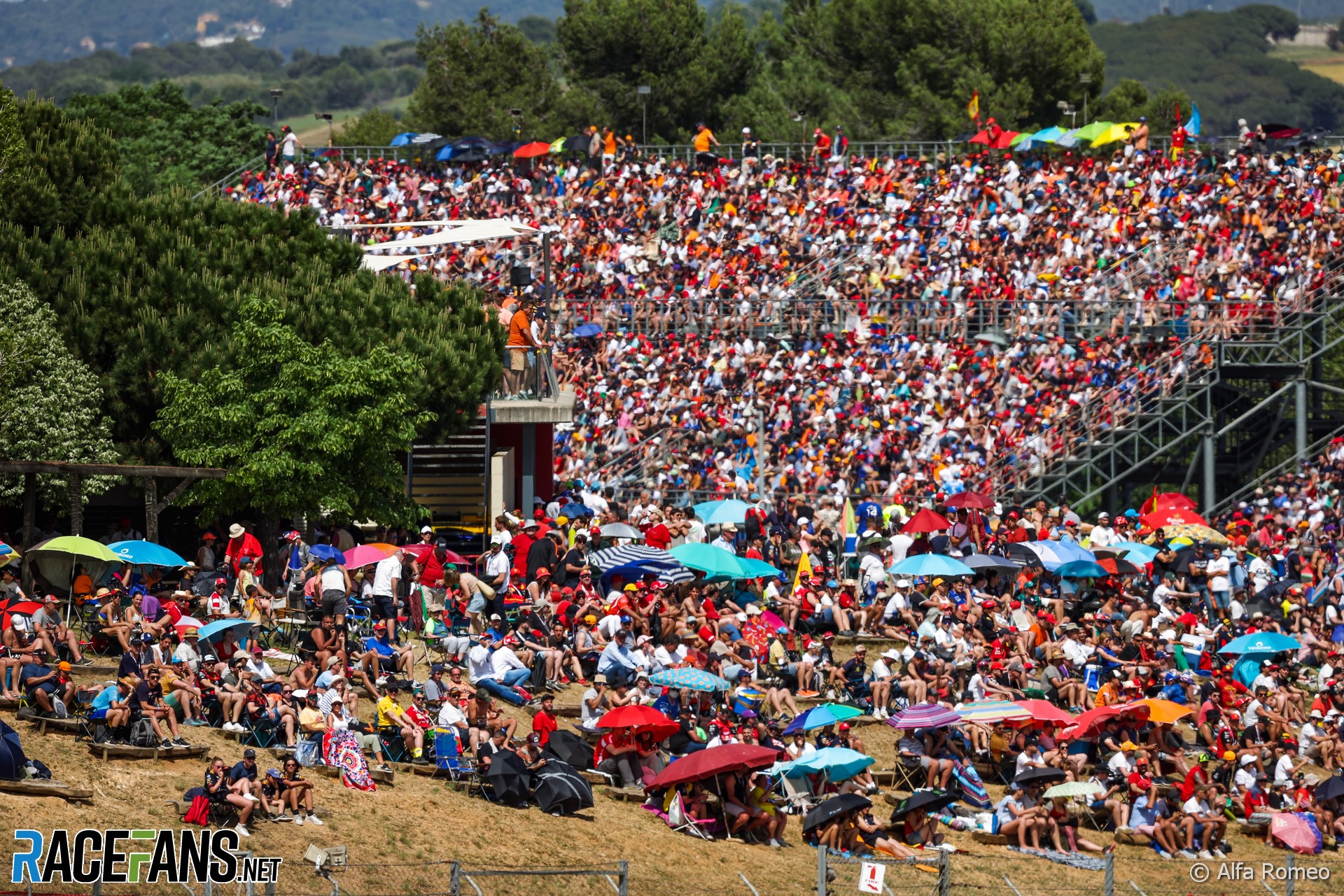 Hundreds of thousands of excited Formula 1 fans poured into the Circuit de Barcelona-Catalunya on Sunday, keen to watch Charles Leclerc and Max Verstappen battle it out at the front as a full house of spectators returned to the track for the first time since 2019.

The pandemic meant the 2020 event was run behind closed doors, and only around 1,000 were admitted 12 months ago as the easing of restrictions began.

But while the return of fans and the increased revenue they bring is exactly what the circuit and promoters needed, the organisers seemed ill-equipped to accommodate them all. Reports started circulating regarding traffic congestion in and around the circuit, problems with public transport and queues at food and drink stalls, some even reported to have run out of water.

F1 fan Lena Ferle, who attended the race, explained to RaceFans that while metallic and glass bottles were not accepted into the venue, attendees were encouraged to bring their own plastic bottles. She found a maximum size of 1.5 litres was imposed, to the surprise of several fans who had turned up with larger containers widely-used in Spain.

“I didn’t understand the 1.5 litres rule because some people brought big canisters,” she explained. “They had to leave them at the entrance.”

“We brought water and snacks, but not a lot because we had to carry the bags around the whole circuit. The buses dropped us off at the main gate [but] the gate we were supposed to get in was a 30-minute walk uphill in the sun.

“As soon as we settled in the general admission, one of us would go and get some stuff to eat and drink because we knew the queues would be bad by midday. We were okay with that, but we could watch the queues getting longer and longer, either for the bathrooms or the stalls for water and food.

“On Saturday and Sunday, the stalls in general admission between turn six and seven ran out of water around 2pm.

“On Sunday, 30 minutes before the race started, the water stopped working in the bathrooms. I had luck to be one of the last people to use it because they wouldn’t let anyone in after that.”

The heat wasn’t the only problem. Many fans experienced difficulty getting to the track in the first place.

“The transport was like hell,” said Lena, “we had luck to only wait one hour on Friday and two hours on Saturday. I heard that some people waited to get on a train until 11pm on Saturday and Sunday.”

The lack of organisation at the stations led to “massive crowds” at times. “It was dangerous,” she added, “the waiting would’ve been fine if there was a system.”

Another fan who attended the race, David O’Brien, told RaceFans he felt the most “basic thing” at an event is to provide sufficient water, which the circuit had not done. He added he saw “five people who had collapsed,” adding it was “so badly organised it was dangerous.”

A third fan, Matt Tusan, reported he “didn’t have many issues” but felt he was “one of the lucky ones” judging by what he’d read of others’ experiences.

This was not the most highly-attended F1 round the venue has hosted. In 2006 130,000 fans showed up to watch Fernando Alonso win his home race.

F1 is booming in popularity at the moment and many venues are have seen attendances rise as fans return to the stands in the wake of the pandemic. But this isn’t the only time in the last 12 months spectators have had good cause to feel dissatisfied with how they have been treated at a grand prix.

Spectators who attended the 2021 Belgian Grand Prix stood or sat for hours in the rain and saw no racing. The grand prix was abandoned after three laps behind the Safety Car and no refunds were given.

Weather conditions were at the other extreme in Spain last weekend. As climate change make these dramatic variations more pronounced, the challenge of scheduling 20-plus races globally, in conditions which are comfortable for fans to spectate, will only become more difficult.

Last weekend Formula 1 bosses indicated they plan to group more races by region next season in an effort to reduce transportation and therefore costs – and emissions. But will that mean more races being held at unseasonable times? The Bahrain, Saudi Arabia, Qatar and Abu Dhabi races are already shunted to opposite ends of the calendar and run as night races so spectators are spared the unbearable daytime heat.

Whatever the future holds, for now both F1 and the venue were quick to react to last weekend’s problems. “The huge number of fans at this event both inside and outside the circuit created the traffic issues for the fans,” said F1 in a statement. “We have made the promoter aware that this is not acceptable and must be fixed for next season.”

On Thursday, F1 stated the weekend was sold out, and were expecting an attendance of 110,000 across all three days. However the race promoters admitted the numbers who attended earlier in the weekend caught them by surprise.

“We had special mobility measures for the grand prix but we received more fans than expected on Friday and Saturday,” explained the general manager of the Circuit de Catalunya José Luís Santamaría.

“Additional measures were set up on Saturday and also on Sunday in order to improve the fans mobility during the whole weekend, but at some peak hours there weren’t enough. We understand the discomfort of the spectators who suffered traffic jams and we are sorry to hear some experiences happened in our facilities.”

He promised improvements for next year’s race, which will be the second in its current five-year deal announced last year. “We are already working with traffic and mobility departments to provide a better service to everyone coming to the circuit and, for sure, we will improve the fan experience for next year during the F1 grand prix,” Santamaría added.

He also defended how the circuit responded to the high temperatures seen during the weekend. “Last week we had an unusual heatwave and we quickly reacted from Friday to increase the water provisions and to reduce the queues at some points during the weekend,” Santamaría said. “We organised a dedicated queue for water in every bar around the circuit, we put additional water-only stalls around the facilities and we had additional water bottles delivered last minute.”

Some aspects of the organisation of last weekend’s event clearly left much to be desired. While F1 is doing an excellent job of attracting new fans to the sport, it risks losing them quickly if their experience of attending a race in person is no better than this.