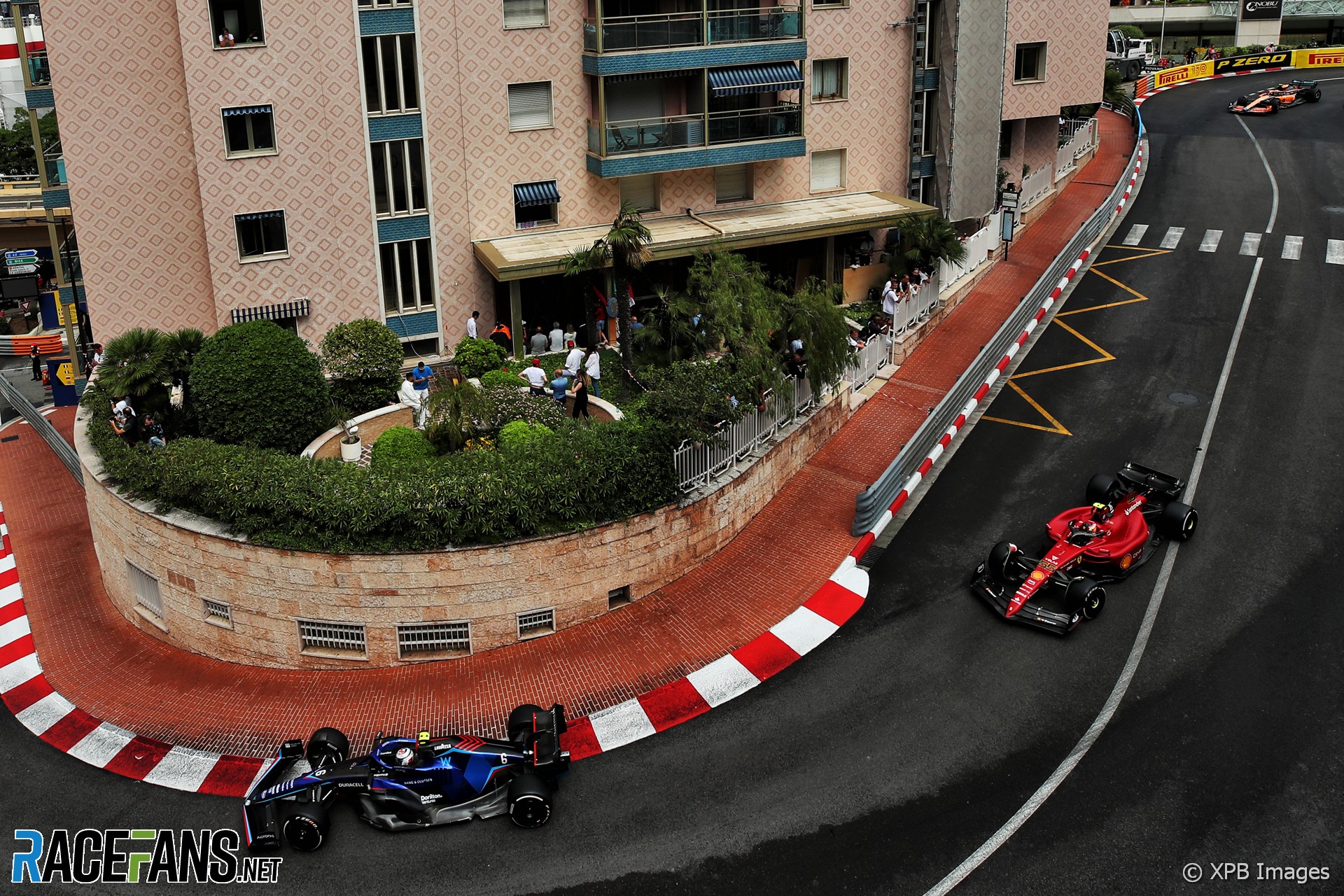 After his sole pit stop of the day Carlos Sainz Jnr spent half a lap behind Nicholas Latifi, which he said cost him a position to Perez. Charles Leclerc, in the other Ferrari, was also held up behind Latifi’s team mate Alexander Albon.

The delays were a particular source of aggravation for Ferrari as the team collected a heavy fine on Saturday when Sainz held up Lance Stroll during final practice. The stewards came down heavily on the team, saying they gave Sainz “a series of grossly incorrect messages, by radio, about the gaps to the cars behind” about his gaps to drivers behind.

Ferrari warned Sainz he was being caught by Yuki Tsunoda. However the situation was complicated when Tsunoda unexpectedly told his team he needed to pit, apparently due to a car problem. As Sainz slowed approaching the final corner to let him by, Tsunoda dived into the pits, and Sainz moved back to the racing line as Stroll appeared behind him.

The stewards described the incident as “unacceptable”. However team principal Mattia Binotto said the team “did our best” to avoid holding anyone up and did not agree with the stewards’ decision.

“We believe that the impeding he made was certainly not dangerous,” he said in response to a question from RaceFans. “We [were] not too happy for the fine.

“We believe it was not the right choice because we believes that as a team and driver we did our best in order to avoid it at the time and not making anything wrong. So overall, we need to accept those decisions [but it] doesn’t mean we agree with them.”

He noted that in the race “solid blue flags” were shown to Albon and Latifi, both of which delayed his drivers “and no further actions” were taken.

Sainz said the Williams pair “cost us both the same the race and no further action. And that was proper impeding.

“I cannot count the times that I got impeded in Monaco this weekend, both being dangerous and not dangerous,” he added. “What I don’t understand is why we got fined €25,000 as a team for impeding, which I did, and I accepted the blame, and I apologise to Lance. I don’t understand why other cases are not investigated and other people are not fined for exactly the same thing.”

Latifi should have realised he was interfering with the battle for the lead of the race by not giving way more quickly, said Sainz.

“You can understand the frustration and the feeling that I went through there because I knew my race was all about that out-lap,” he said. “And as soon as I exited the pits, I was wheel-spinning, obviously in the wet patch and he just managed to sneak in ahead of me.

“I think personally, knowing that I was the leader of the race at that time, he could have perfectly just stayed behind me instead of overtaking me, while I have to stay to the right of the yellow line, like some others struggled to do. He overtook me basically going up because I had to stay right on the wet patch, the yellow line.”

The Williams driver delayed Sainz for around half a lap. “I had to follow him turn three, turn four, turn five, turn six, turn seven, turn eight, and at the exit of turn eight he got out of the way in the tunnel,” said Sainz. “But at that time I had already lost the warm-up of the tyre and the time to make a difference on the slick. I believe the slick at that point was already as quick as the inter[mediate] and for sure not slower than the inter.

“Just because of being stuck behind the slowest car of the grid on the track at that time it cost me them the opportunity to stay ahead of Checo after the pit stop. So you can imagine my frustration. You can imagine my shouting on the radio to get him out of the way. But for some reason, it took longer than it should.”

Sainz caught Latifi after he left the pits on lap 21.

Become an RaceFans Supporter today and browse the site ad-free. Sign up or find out more via the link below:

14 comments on “€25,000 fine heightens Ferrari’s frustration over backmarkers who ‘cost us the race’”