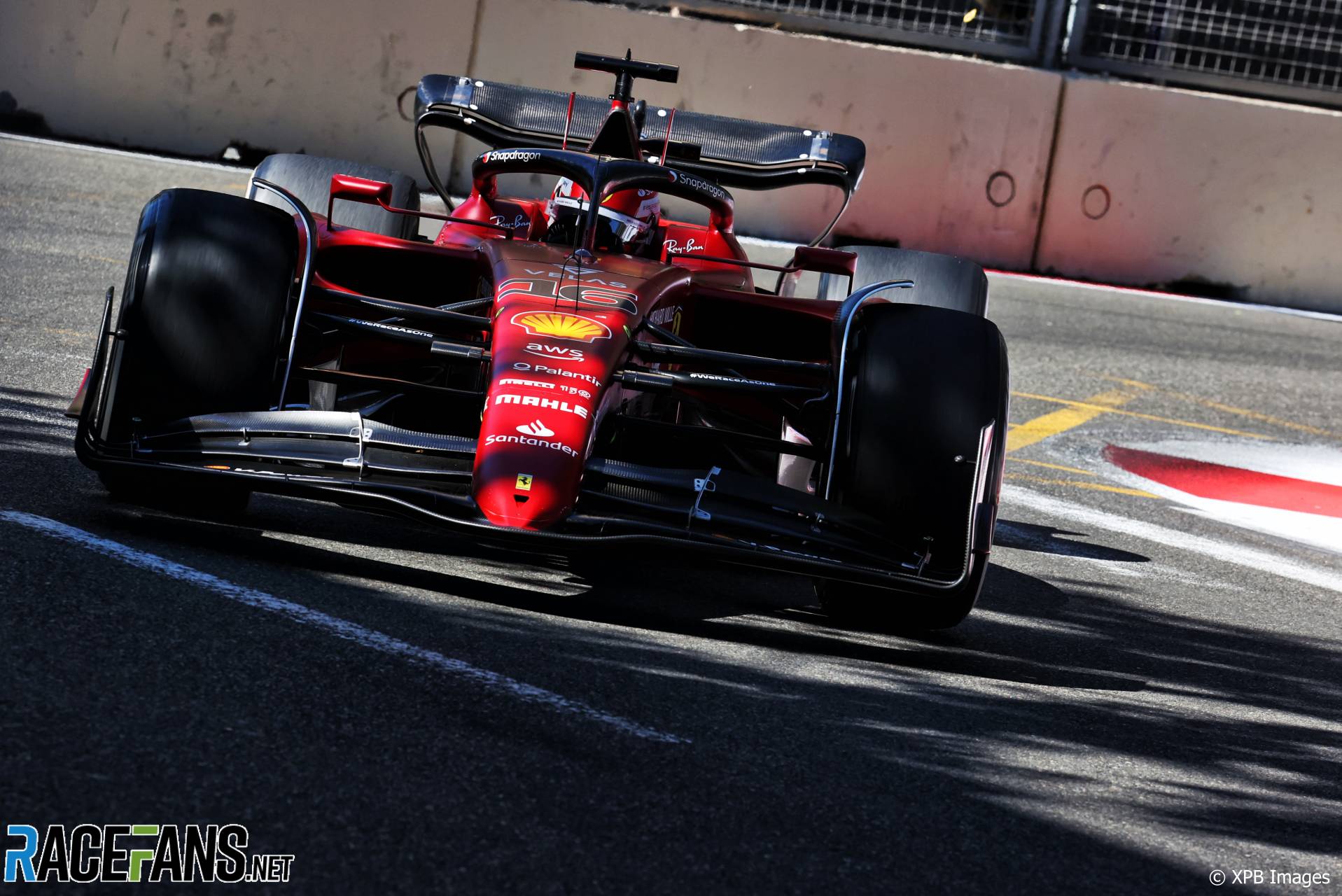 Ferrari’s analysis of the data from last weekend’s Azerbaijan Grand Prix shows Charles Leclerc was on course for a comfortable victory before his retirement.

The team were criticised over their tactics following the previous race in Monaco, where their drivers finished second and fourth having run one-two in the opening stages.

However Ferrari’s sporting and strategy director Inaki Rueda said Leclerc’s pit stop under the Virtual Safety Car put him in a strong position to win the race in Baku. He retired with a power unit failure shortly after regaining the lead.

Rueda said the team had reacted well to the Virtual Safety Car period caused by Carlos Sainz Jnr’s retirement in the other Ferrari early on. Red Bull failed to bring race leader Sergio Perez in following a miscommunication, and Max Verstappen was told to do the opposite to Leclerc, who pitted.

Leclerc “was fighting for the lead with Perez and he had Verstappen on his gearbox” before the VSC period, Rueda explained. “Verstappen got within DRS range of Charles and this is something we’ve been working on lately, because with such small margins, with Red Bull, we find ourselves winning or losing games with DRS overtakes.

“For Baku we brought a different rear wing and we worked on our strategies. Crucially when Carlos stopped, we realised that it was very likely going to be a Virtual Safety Car period. And we got ready with Charles to pit in case race direction thought they had to deploy as the Virtual Safety Car.

“This was crucial for our race because a pit stop under a Virtual Safety Car costs roughly 10 seconds less than a normal pit stop. And because of this, Charles was able to do his only pit stop of the race with much less penalty than both Red Bulls.”

Leclerc took the lead of the race after the two Red Bull drivers pitted. Rueda believes he would have been able to stay there had the race concluded without further interruptions. This did not happen, however, as Kevin Magnussen’s retirement caused another VSC period later in the race.

“After the Virtual Safety Car period on lap nine Charles set off to go to the end on the hard tyres,” said Rueda. “Red Bull tried to go as long as possible in the medium tyre, but they were dropping a lot. The medium tyre has a lot of degradation and Perez lost a lot of time trying to go longer and longer to offset himself to Charles.

“Unfortunately, after 11 laps on the hard tyre, Charles suffered a power failure and this cut our race short. Our simulations indicate that had there not been another Virtual Safety Car period, Charles would have won the race comfortably against Verstappen.”

However Red Bull team principal Christian Horner suspects Verstappen would have been able to close on Leclerc and pressure him later in the race had the Ferrari kept going. He said his team intended “to split our cars” on strategy when the first VSC period occured.

“We told Max to do the opposite of Leclerc. We felt that Max at that stage had more pace than Charles, he was pushing, pushing, pushing him. But Charles, in turn, was benefiting from the tow of Checo. And so the DRS effect wasn’t quite as large as it would it would normally be. So we elected to stay out.

“I think it was so early, and other than six laps of a long run on Friday, there was no knowledge of how these tyres would degrade. So our strategy obviously at that point was to give us bigger overlap in terms of fresher tyres to our drivers without the gap being too big to Charles. So that was obviously the thinking behind it.

“It’s a shame it didn’t play out because I think we did have a very quick race car today and I think with that eight or nine-lap overlap with the drivers, that would have been a sufficient advantage to to hopefully make the pass on him.”