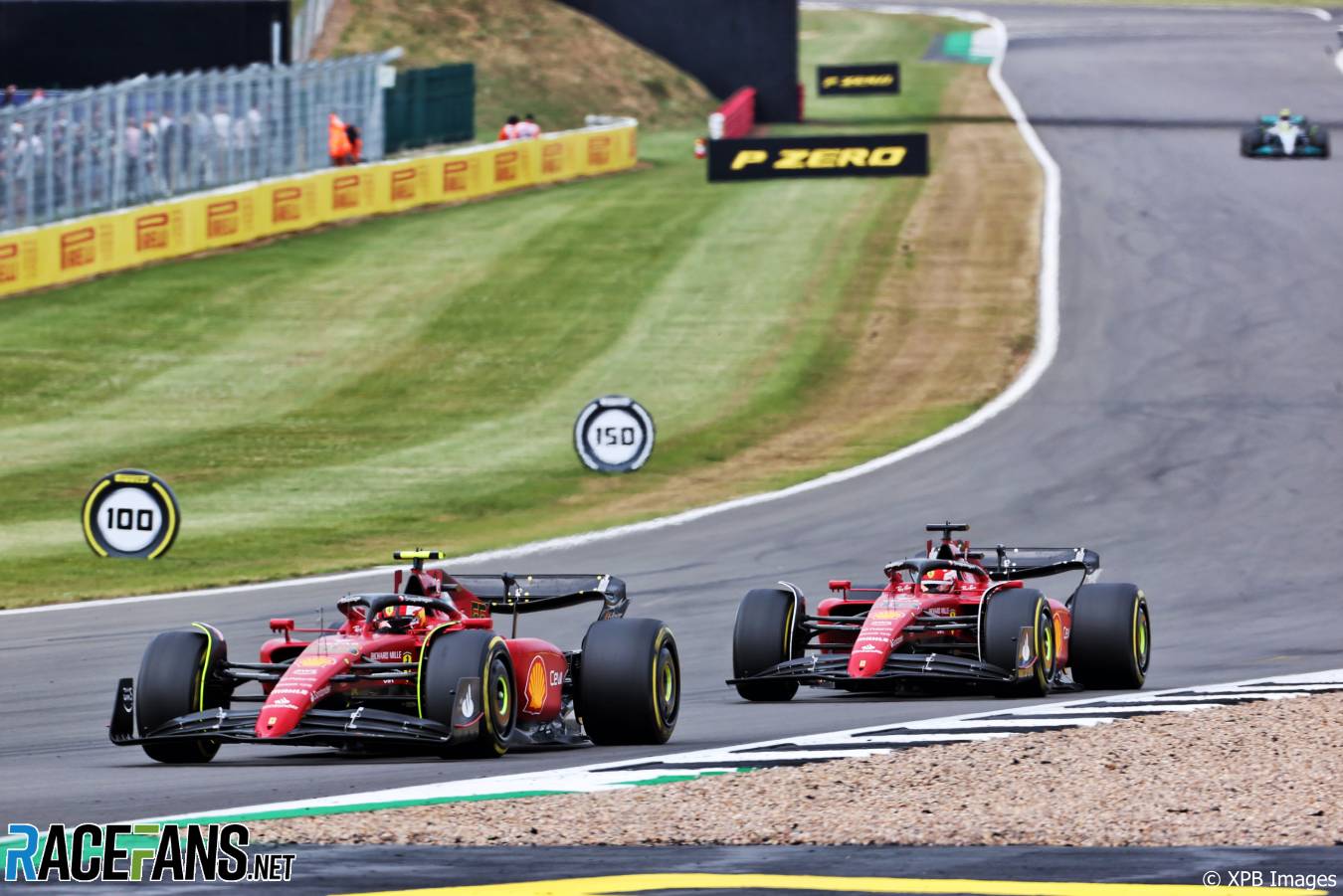 Sainz took advantage of a Safety Car to pit for fresh soft tyres while Leclerc was told to stay out on old hard tyres. Sainz passed his team mate for the lead at the restart and drove away to claim the victory.

When the lights went out, Verstappen got a better getaway off the line and passed Sainz for the lead before reaching Abbey. But behind, there was a serious accident.

Pierre Gasly had a good start and was side-by-side with George Russell to his right and Zhou Guanyu to his left. As the three approached Abbey Corner, Russell moved slightly to the left to take the racing line for the corner and Gasly was sandwiched between the two cars.

Contact with both Russell and Zhou pitched the Mercedes into a spin to the left, clipping the right-rear of the Alfa Romeo and sending Zhou into an immediate roll and skidding into the gravel trap where the hit the tyre barrier, flipping over the wall into the catch fencing.

Behind, Alexander Albon spun to the inside wall after being hit by Sebastian Vettel trying to avoid the accident and collected Yuki Tsunoda, with Esteban Ocon was also involved in the collision. The race was immediately red flagged.

At the same time, a group of protesters stormed the circuit by climbing over the spectator fences. Thankfully, the race had already been stopped and any danger to life was minimised. Northamptonshire Police confirmed that protesters had been removed.

After a delay of almost an hour, the field took to the grid for the restart from their original starting grid positions, due to the immediacy of the red flag. This time, all of the top six starters opted for medium tyres.

When the lights went out for a second time, Verstappen again got a good start and jumped to the inside of Sainz into Abbey. However, Sainz held on and aggressively defended to keep the lead through the opening sequence of corners as, behind, Perez took third from Leclerc.

Into the Loop, Leclerc dived to the inside to retake third from Perez and the two made contact, with Perez also clipping the rear of Sainz’s Ferrari.

With damage to his front wing, Perez came under intense pressure from Lando Norris. At the end of lap five, Red Bull called Perez into the pit for a new front wing, dropping him down to 17th and last. With Perez out of the way, Hamilton overtook Norris into Brooklands to take fourth place.

However, two laps later, Verstappen suddenly lost pace heading through the Maggotts, Becketts sequence and Sainz managed to get back through into the lead. Verstappen immediately pitted, reporting a puncture, which dropped him down to sixth position. Red Bull warned Verstappen that he had suffered bodywork damage and would suffer a performance loss for the rest of the race.

The two AlphaTauris were fighting over seventh place when Yuki Tsunoda tried a move to the inside of the tight Aintree corner. Tsunoda lost control of the rear of the car and collided with his team mate, sending both cars spinning and dropping them both towards the back of the field. Tsunoda was handed a five second time penalty for the collision.

With Verstappen now significantly behind the Ferraris, Sainz found himself with Leclerc in his mirrors. Sainz remained ahead until his pitted at the end of lap 20, rejoining in third place on the hard tyres.

Leclerc stayed out and began pushing to try and overcut his team mate when he eventually pitted. However, Hamilton – who was now up to second having not yet pitted – began to slowly catch up to the back of the now-leading Ferrari.

Hamilton got within DRS range of Leclerc on lap 25 and Ferrari called the leader into the pits at the end of the lap, moving him onto hard tyres. Leclerc resumed two seconds behind Sainz in third place, while Hamilton remained out on his old medium tyres.

Hamilton continued to match the Ferrari drivers on his old tyres, while Leclerc was getting increasingly anxious about the Mercedes ahead while stuck behind his team mate. Ferrari ordered Sainz to allow Leclerc by, which he did along the Wellington Straight.

Eventually, Hamilton pitted at the end of lap 33 for hard tyres, but a slightly delayed stop saw him rejoin behind the two Ferraris. That put Leclerc into the lead with a 1.7 second gap over Sainz, who was four seconds adrift of the second Ferrari.

After Hamilton’s tyres got up to temperature, he began to catch Sainz ahead. However, on lap 39, Esteban Ocon suddenly slowed through the first sector, eventually coming to a stop on the approach to Copse corner.

Ferrari told Leclerc to stay out, but brought Sainz in for soft tyres. Hamilton also pitted for softs, the pair both holding position and rejoining right behind leader Leclerc with much fresher tyres.

Before the race resumed with 10 laps remaining, Ferrari asked Sainz to leave a gap of ten car lengths to his team mate, but Sainz refused. When the green flags flew, Sainz took the lead along the Wellington Straight while, behind, Perez took fourth place from Hamilton.

When DRS was enabled, Perez tried to pass Leclerc around the outside of Vale and the two ran off circuit at Club, allowing Hamilton past the pair of them. Then, Perez dived back past Hamilton to retake second place, which also allowed Leclerc back through into third.

Sainz pulled away out front and checked off the final laps to take the chequered flag and his first career victory. Perez finished second almost four seconds behind, with Hamilton completing the podium with the fastest lap on the final lap.

Leclerc finished fourth, with Fernando Alonso fifth ahead of Lando Norris. Verstappen held onto seventh with some aggressive defending on the final lap from Mick Schumacher, who claimed his first career points in eighth. Sebastian Vettel and Kevin Magnussen rounded out the top ten.