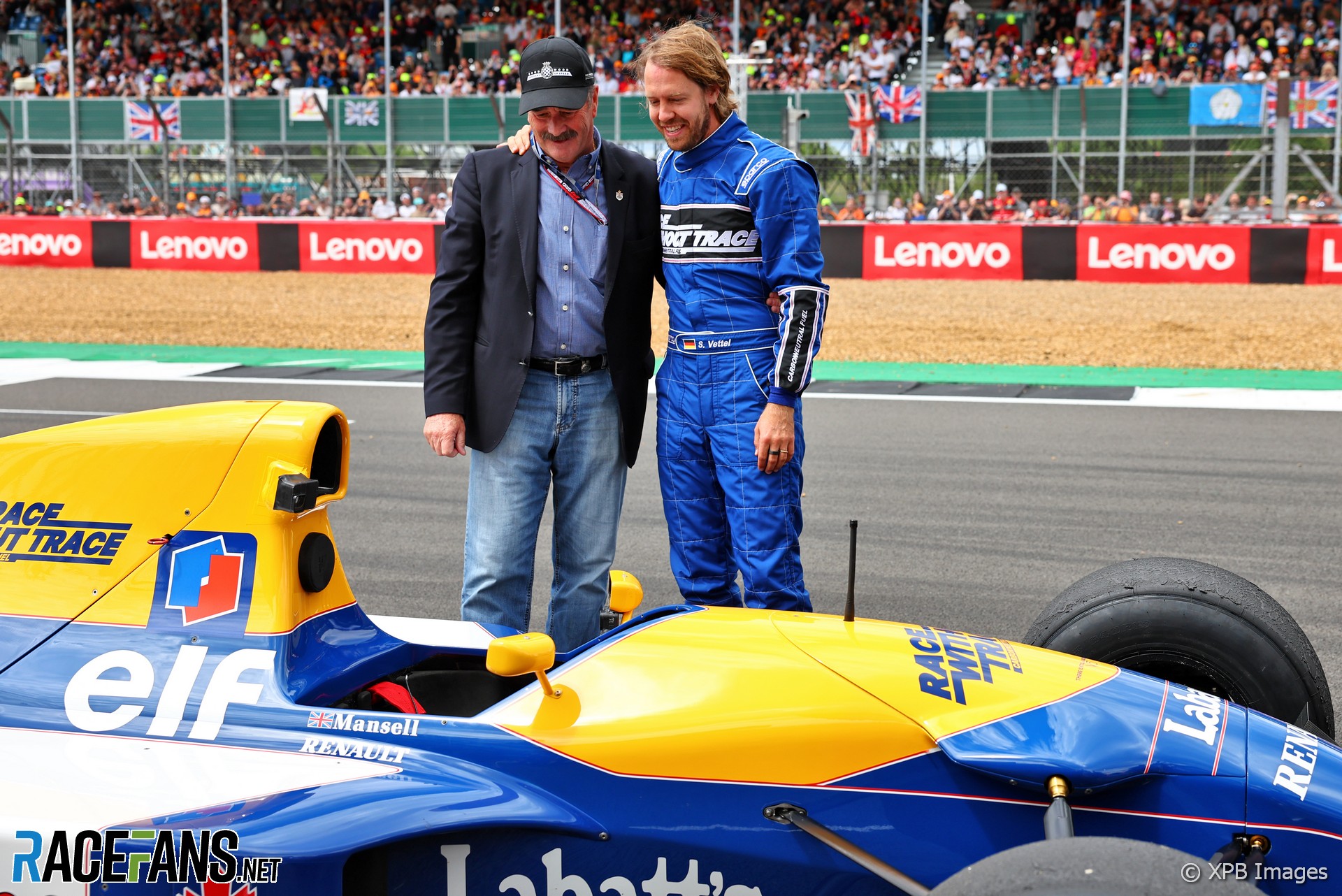 Sebastian Vettel said his run in Nigel Mansell’s Williams-Renault FW14B was inspired by nostalgia but showed his focus on the problems of the future.

The four-times world champion owners the example of the 1992 title-winning car which he took out on track at Silverstone ahead of the British Grand Prix. Mansell was on hand to watch the run and greeted Vettel on his return.

Vettel, who sported a specially-designed helmet in Mansell’s style for the run, said “it was very special to have him there awaiting me at the end.”

The experience brought back childhood memories for the Aston Martin F1 driver. “The sound, it was… I felt like a five year old again because the sound, everything just brought me back to 30 years ago.”

The car ran on a a specially-produced sustainable fuel. Vettel said he was keen to highlight the need to embrace new environmental technologies.

“Doing it the way that we did it, with carbon neutral fuels, trying to showcase that the emotions can be great but we can do it in a more responsible way, was very, very important to me.

“When I came up with the idea that 30 years ago Nigel won the grand prix [at Silverstone] – obviously, I’ve got the car from that that time and that very car – I didn’t want to do it and just waste resources and thought of a better way of doing it.

“So I’m very proud we got [it] together and I got the chance, it was even on my birthday, which I didn’t realise at the time.”

The petrol Vettel used to power the car’s 3.5-litre V10 Renault engine was supplied by P1 Fuels and made using a mix of biological and synthetic fuels. A percentage comes from bioethanol from non-feed stocks and another from methanol synthesised out of captured CO2 from the air and hydrogen generated by electrolysis from non-drinkable water.

Using bioethanol means that the petrol replacement is more easily generated than relying on the synthetic fuel alone. Vettel said the fuel cost €5.95 per litre (£5.09).

Vettel said that he hoped projects like his ‘Race Without a Trace’ initiative would push F1 towards moving to sustainable fuels on a faster timeline. “I’m not taking decisions here, but I can ask questions and the plan is to to move in that direction.

“There’s pros and cons also when you talk about synthetic fuels, how are you doing them and what’s the source and so on. But we have no time to waste, no time to wait.

“Obviously the introduction is planned for 2026, I understand that not everybody’s easily agreeing on changing it sooner but in the end that’s probably going to be the right call, to do it sooner.”