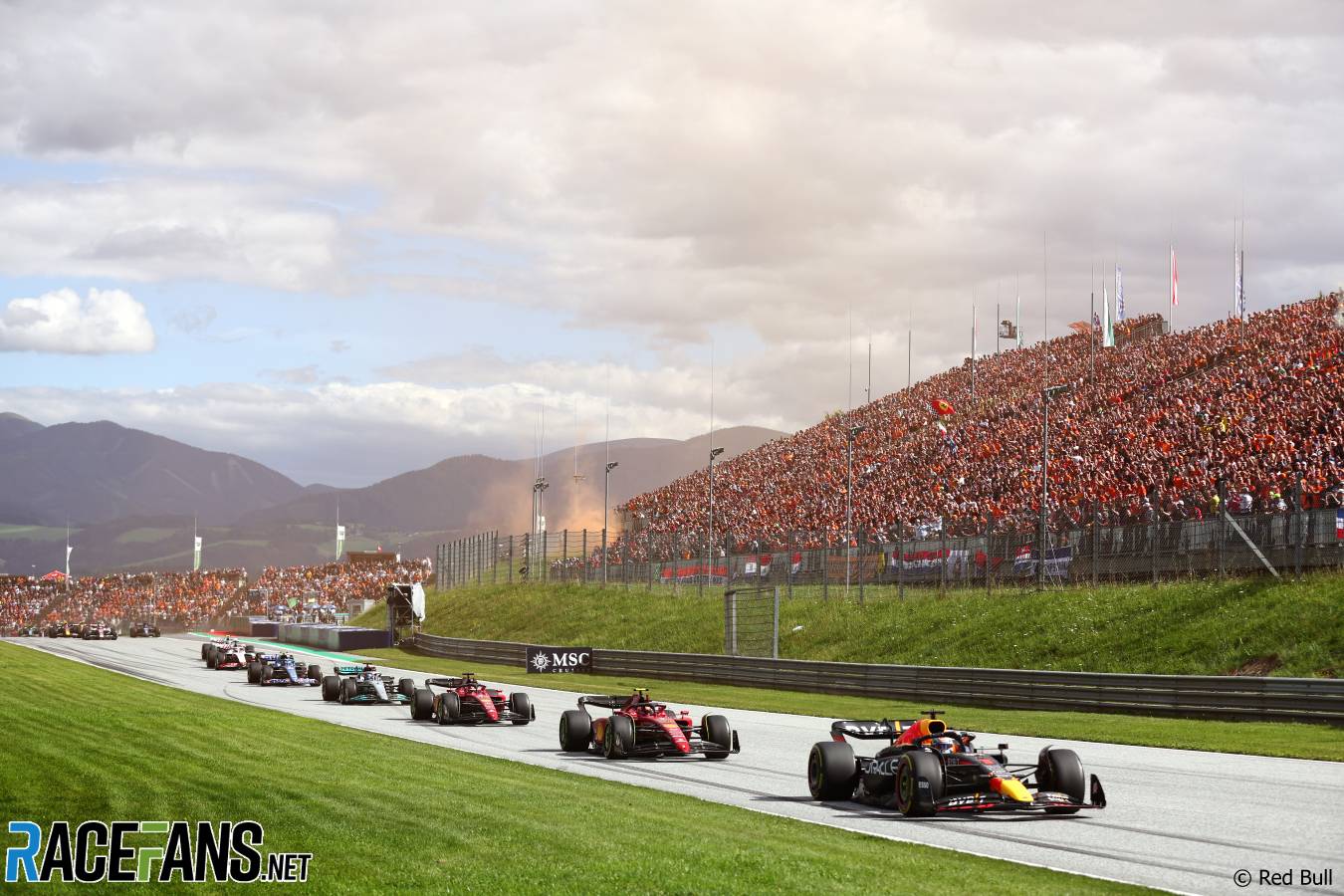 If adopting the sprint race format was designed to inject more drama and intrigue into all three days of a grand prix weekend, this year’s Austrian Grand Prix might be the best example of how this radical new approach can also be a double-edged sword.

A tight conclusion to qualifying on Friday offered a hint that Ferrari were evenly matched with Red Bull and championship leader Max Verstappen, with the trio separated by less than a tenth. Then there was the added interest of Mercedes threatening to be in contention too, had Lewis Hamilton and George Russell both not thrown their cars into barriers in the most important phase of qualifying.

But after a relatively uneventful sprint race – at least at the front of the field – had played out on Saturday, the same top four from Friday remained. Only now, everyone from the drivers and teams themselves to the millions watching around the world were left with very strong sense of how Sunday’s 71-lap main event would likely play out.

Having snatched pole position at the last possible moment on Friday, Verstappen had warned that his Red Bull would likely be stronger in a racing situation than it had been over a single lap. And while he may not have topped the second practice session on Saturday afternoon, his lap times on the medium tyres had been consistently quicker than what both Charles Leclerc and Carlos Sainz Jnr had been able to manage.

In the 23-lap sprint race, with all of those at the front on the mediums, Verstappen’s early pace advantage over the Ferraris was by no means vast. In the early stages, both Sainz and Leclerc successfully matched Verstappen for pace, with Leclerc continuing to equal or beat the championship leader’s times eight times over the first 14 laps of the sprint race as Sainz began to gradually fall away. What cost Ferrari the most – and particularly Leclerc – was the laps when the pair were focused more on fighting with each other than on catching the Red Bull ahead.

Although Verstappen kept Leclerc well out of his DRS range over the remaining laps and took the chequered flag to secure pole position for Sunday, he had to concede that he had not been simply cruising around with bags of spare pace in hand while Leclerc closed in pursuit at the end of the race.

“The sprint race of course does not give you the full picture heading into the race tomorrow, but pace-wise, it’s close between us and Ferrari,” said Verstappen.

“I still expect it to be a tough battle tomorrow. It’s going to be very important to make good strategy calls during the race as you never know what can happen. It’s not going to be straightforward, but I’m looking forward to it.”

The closest Ferrari got to Verstappen in the sprint race being Sainz’s unsuccessful attack into turn three on the opening lap. Nonetheless racing director Laurent Mekies came away from the pit wall more reassured by the team’s proximity to Verstappen at the chequered flag than frustrated that the Red Bull had beaten them to it.

“Today’s sprint race confirmed that on this track too, it’s really close between us and our main rivals,” Mekies explained.

“It was important to verify this in race conditions and I’d say that this afternoon’s 23 laps confirmed it. I think tomorrow’s race will be very closely contested and anything could happen.”

Perhaps unsurprisingly, having been the Ferrari driver closest to Verstappen at the finish, Leclerc was of the view that he and team mate Sainz must not get bogged down fighting against each other on Sunday, lest they risk allowing Verstappen to get away from them again.

“I think tomorrow is going to be a long race and tyre management will be quite a bit more important compared to today.” Leclerc said. “So probably tomorrow we cannot afford to do what we did today, no.”

Having showed no hesitation to fight for position against his team mate when the opportunity presented itself, Sainz is happy for Ferrari and team principal Mattia Binotto to allow them both to fight Sunday’s grand prix – unless Ferrari opt to tell him otherwise.

“Mattia will decide. And the team,” said Sainz. “It’s not like we lost a lot and it didn’t look like Max was panicking too much up front with our pace. But we need to make sure we stay closer at the beginning of a stint, and we are closer at the end of a stint. I think this is what we need to try and do tomorrow.”

One benefit for Ferrari on Saturday was that there only one Red Bull to focus on, with Sergio Perez starting from 13th on the sprint race grid after a penalty. That will not be the case on Sunday after Perez rose to fifth on the grid for the grand prix, cancelling out his qualifying penalty almost entirely, putting him firmly in striking distance of joining the party at the front when it matters most. But Perez knows he will have a lot more time on his hands during the longer race of the weekend.

“Patience will be key on Sunday,” said Perez. “I want to get a good start and get in the mix straight away in the race.

“I made up four places in the first lap today, so hopefully tomorrow is the same. We are still to unlock some potential from the car, so we can look forward to the race.”

Behind Red Bull and Ferrari, Mercedes would have felt very fortunate to have Russell able to start from fourth in the sprint race after crashing in Q3. The team’s practice pace on Friday had been encouraging, so would that translate when it came to a race situation? Based on Russell’s sprint race pace, it appears the answer would be ‘not quite’.

“The gap was more than we were expecting,” admitted Russell, who had to switch to an older-specification rear wing following his crash. “We were 13 seconds behind after 23 laps, so that’s nearly half a second per lap.

“We need to work overnight to understand why we dropped off the pace. Small things can make a difference – the tyres weren’t easy to manage and different approaches to downforce levels will play a part tomorrow. But we are in no doubt that we’ve got work to do.”

Behind Russell and Perez on the grid will be Esteban Ocon in the Alpine, satisfied to have dropped only one place from his sprint race starting position, to Perez’s recovering Red Bull. Unfortunately, the same could not be said for his team mate Fernando Alonso, whose car seemingly objects to the sprint race format so strongly that it switched itself off prior to the formation lap and refused to turn back on in time for the start.

With the Alpine due to start on the back row of the grid alongside the penalised Valtteri Bottas on Sunday, watching the luckless Alonso attempt to make his way through the field with a strong car underneath him will be one of the more interesting elements of the grand prix. And with Alonso ending the second practice session fourth fastest, there’s plenty of reason to think the oldest driver on the grid will be planning on putting his wealth of experience to good use in the race.

After Friday, Pirelli predicted that the soft tyre could last the 24 laps of the sprint race with some careful management. While that was proven true by a handful of drivers, none of them were close to the top 10. Heading into Sunday’s 306km grand prix, Mario Isola expects the two harder compounds will likely be favoured by the field.

“Today the teams were able to get some useful long run data on the medium during the sprint race,” Isola explained. “Good information for the race tomorrow, which looks likely to be a medium-to-hard one-stopper, as also confirmed by the performance of the tyres today.

“A two-stopper is slower under normal circumstances, but the best way to do it would be using all three compounds: medium, hard, then soft. There’s a reasonably high safety car probability here, on a tight and unforgiving track, so that could influence a two-stopper.”

The only element that could potentially shake things up for the Sunday is the impact of overnight rain washing away the rubber built up from the sprint race and potentially leaving a damp track for the start of the grand prix. The weather radars suggest rain isn’t likely to affect proceedings but should they come it could blow the battle at the front open much wider than in the dry.

Not that it will be likely to faze the pole-winner, who has not been beaten in any competitive session at the Red Bull Ring in the last two years and counting. If Ferrari want to prevent another Verstappen clean sweep in front of many of his adoring fans, they will need to play things smart on Sunday.

Can the Ferrari drivers make a better fist of their second attempt to beat Verstappen? Share your views on the Austrian Grand Prix in the comments.