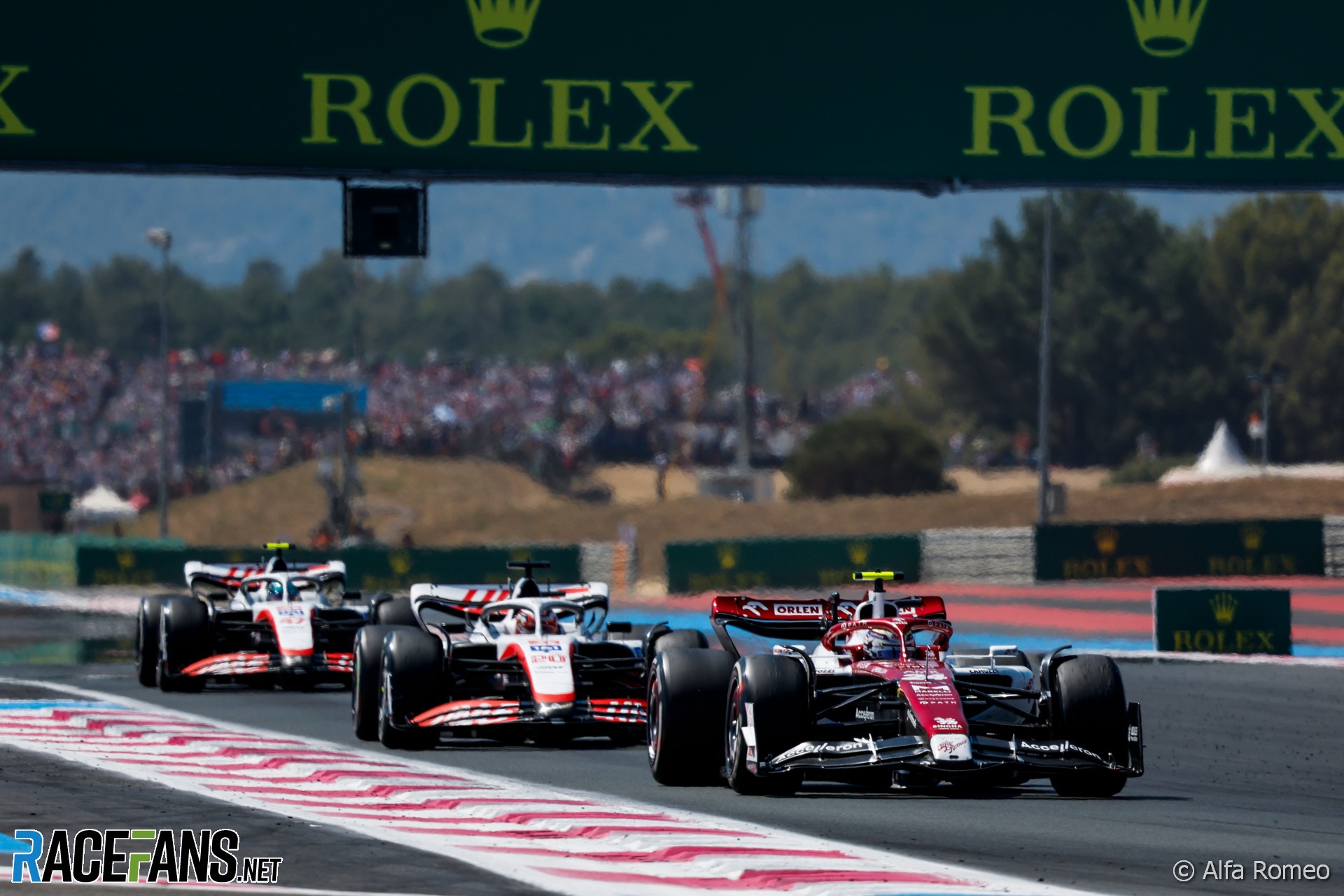 Zhou Guanyu accepted the stewards’ decision to penalise him for his collision with Mick Schumacher in yesterday’s French Grand Prix, before he suffered yet another technical failure.

The Alfa Romeo driver was given a five-second time penalty after tangling with Schumacher at Beausset. The stewards ruled the rookie driver was “predominantly to blame for the collision,” noting he “lost control of the rear of the car when [Schumacher] was on the outside and made contact with Schumacher, causing Schumacher to spin.”

Zhou said he wasn’t able to avoid sliding into Schumacher. “Unfortunately with Mick, obviously into the corner I was ahead and before the corner ends, he kind of got more speed and going around a little bit in front of me, but by that time I had closed a little bit more in the corner.

“I think we both a little bit misjudged where we were in the position so it was almost impossible by that point before I realised he started closing more. I think he didn’t let me have enough space so unfortunately we had the contact, which is not something I wanted.”

Before the race, drivers discussed the stewards’ responses to several incidents during the previous rounds with the race directors. They included George Russell’s collision with Sergio Perez in the Austrian Grand Prix, which was penalised, and Alexander Albon’s clash with Sebastian Vettel, also in Austria, which was not penalised.

Zhou said his collision with Schumacher was: “Similar to, I think, George-Perez, Alex and Vettel. It’s very similar. One guy outside, they have got more grip, they tried to go ahead and started closing more and inside is kind of by that point tighter corner radius, you can’t really do much because your car started using more steer when they start turning.

“So I’m happy to take five seconds, but obviously just keep it consistent because Alex didn’t get a penalty. So as soon as it’s consistent for the rest of the year, I’m happy to do that.”

The stewards also gave Zhou two penalty points, which puts him on a total of four.

The Alfa Romeo driver did not reach the chequered flag after suffering the latest in a series of power unit problems. He revealed the problem materialised long before it put him out of the race with six laps to go.

“Actually 20 laps to the end I was suffering some issue, just a lack of power, having some misfire. I’m not really sure why. One lap it’d be okay and then suddenly three, four laps later I’d just have the issue.

“We tried to fix it, it looked like it was okay to finish the race, but then with six laps to go, I was just losing all the speed I had everywhere. So I think it was the safe thing to do.”

He has retired from five races so far this year, all of which were due to technical problems, apart from his spectacular Silverstone crash.

“Obviously it’s not ideal to still have that after halfway through the season,” he said. “Especially I think with a lot of races coming towards the end of the year [which] will be very hot like, for example Singapore, Austin, all these tracks, and even next week. All the guys are trying to not have any issues, so hopefully we can fix that.”