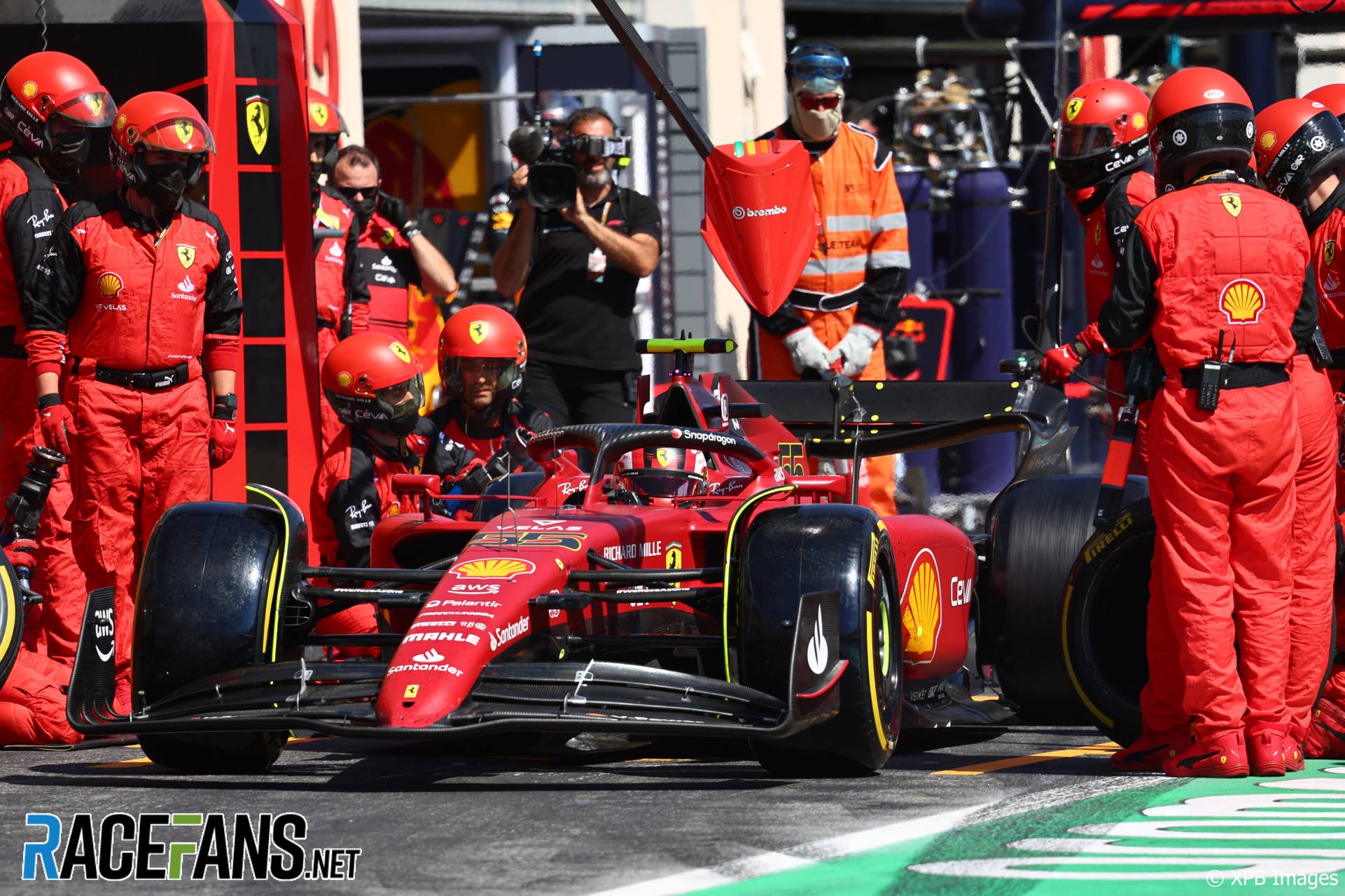 Ferrari’s decision to bring Carlos Sainz Jnr in for a second pit stop moments after he’d made a pass for third position was hotly debated after the French Grand Prix.

Ferrari’s decision appeared to have cost Sainz a podium finish. It didn’t help matters that the presentation of the discussion on the radio gave the impression they called Sainz in at the exact moment he was overtaking Sergio Perez, which was not the case.

However that moment came amid several laps of discussion between Sainz and the Ferrari pit wall over whether he should come in. The driver told them as early as lap 38 they needed to make a decision on their strategy “now”, but he didn’t come in until four laps later. Whether or not the decision was correct, the hesitation clearly cost them.

Having lined up 19th on the grid, Sainz was immediately passed by Kevin Magnussen, the only driver who started behind him. Sainz had to get his set of hard tyres into their operating window while the majority of his rivals began the race on mediums.

By the fifth lap he had already moved ahead Yuki Tsunoda (who was hit by Esteban Ocon on the first lap), Zhou Guanyu, Nicholas Latifi, Valtteri Bottas, Pierre Gasly, Mick Schumacher and Alexander Albon. But having got his tyres up to temperature they were soon getting too hot.

Haas chose a two-stop strategy for Magnussen and Ferrari hopes others would follow, clearing a way for Sainz. But they were to be disappointed.

Sainz continued to make progress, picking off the Aston Martin drivers to move into the points-paying positions.

Only Magnussen’s team mate had followed his move onto a two-stop strategy. At the front, Max Verstappen’s efforts to pass Sainz’s team mate prompted Red Bull to make his first pit stop early.

The race then took a dramatic turn. Charles Leclerc crashed out of the lead, and the resulting Safety Car period was unhelpful for Sainz. Ferrari took advantage of the opportunity to make a low-cost pit stop and get him off the hard tyres he disliked, but it left him with a long stint to run on medium rubber.

Making matters worse, Ferrari released Sainz into the path of Albon in the busy pit lane. They warned him at the last second, but he had little time to react. Sainz made reassuring noises about the situation on his radio, but it didn’t convince the stewards his exit had been conducted safely.

Even behind the Safety Car Sainz could tell he preferred his new set of tyres, and though he had concerns about his front wing the team quickly assuaged them and he was ready to continue his rise through the field.

Within a few laps of the restart Sainz had picked off the McLarens and Alonso, and was now lapping as quickly as race leader Verstappen.

Inevitably, Sainz’s unsafe exit from the pits attracted a penalty. Impressively, when Adami described his penalty as a “stop and go”, Sainz immediately corrected him, pointing out it was a time penalty and not an immediate summons into the pits.

By lap 26 Sainz was within striking distance of Russell, though it took him a few laps to find a way by. Once he’d cleared Russell, Sainz went after Perez.

Anticipating a potential second stop, Sainz told Adami he wanted an extra turn on his front wing the next time he came in.

Once he caught Perez, Sainz began losing time. He warned the team it wouldn’t be easy to pass the Red Bull, which was quicker on the straights. With an eye on whether his tyres would make it to the end of the race, Ferrari began considering whether to pull him in for a second stop.

Sainz was eager for the team to make a decision as quickly as possible, as the later a second stop came, the less time he would have to make up places up later.

Ferrari took the decision to bring Sainz in. However they hesitated, first because they were waiting for cars behind him to drop further back so he would have less traffic to deal with after his stop.

By the time Ferrari decided they were ready to call Sainz in, he’d finally got a good run on Perez, who he passed. Before that he brushed off a message from the team calling him to pit.

As Ferrari later pointed out, the delay in broadcasting messages on the world feed explains why viewers heard the message after Sainz had passed the pit lane entrance as well as Perez. They say the exchange happened at the exit of turn 10, which tallies with the lag typically seen on messages broadcast on drivers’ onboard streams on F1 TV.

Ferrari finally brought Sainz in on lap 42. He left the pits with a huge pace advantage over the cars around him, but little more than 10 laps left to use it.

Sainz, who had wanted to stay out another lap on his mediums, immediately had second thoughts about the strategy. Ferrari told him the decision had been necessary due to the age of his tyres.

Sainz’s slim hopes of catching Perez and Russell again were thwarted when Zhou retired from the race, triggering a Virtual Safety Car period.

After the chequered flag fell, Sainz still felt the team should have gambled on leaving him out. By pitting for fresh tyres he had been able to set the fastest lap and gain an extra point. But even if he had only been able to out-run Russell by staying out, Sainz could still have banked more points.

Become a RaceFans Supporter today and browse the sit ad-free. Sign up or find out more via the links below:

10 comments on ““We need to decide now”: Inside Sainz and Ferrari’s French GP strategy dilemma”