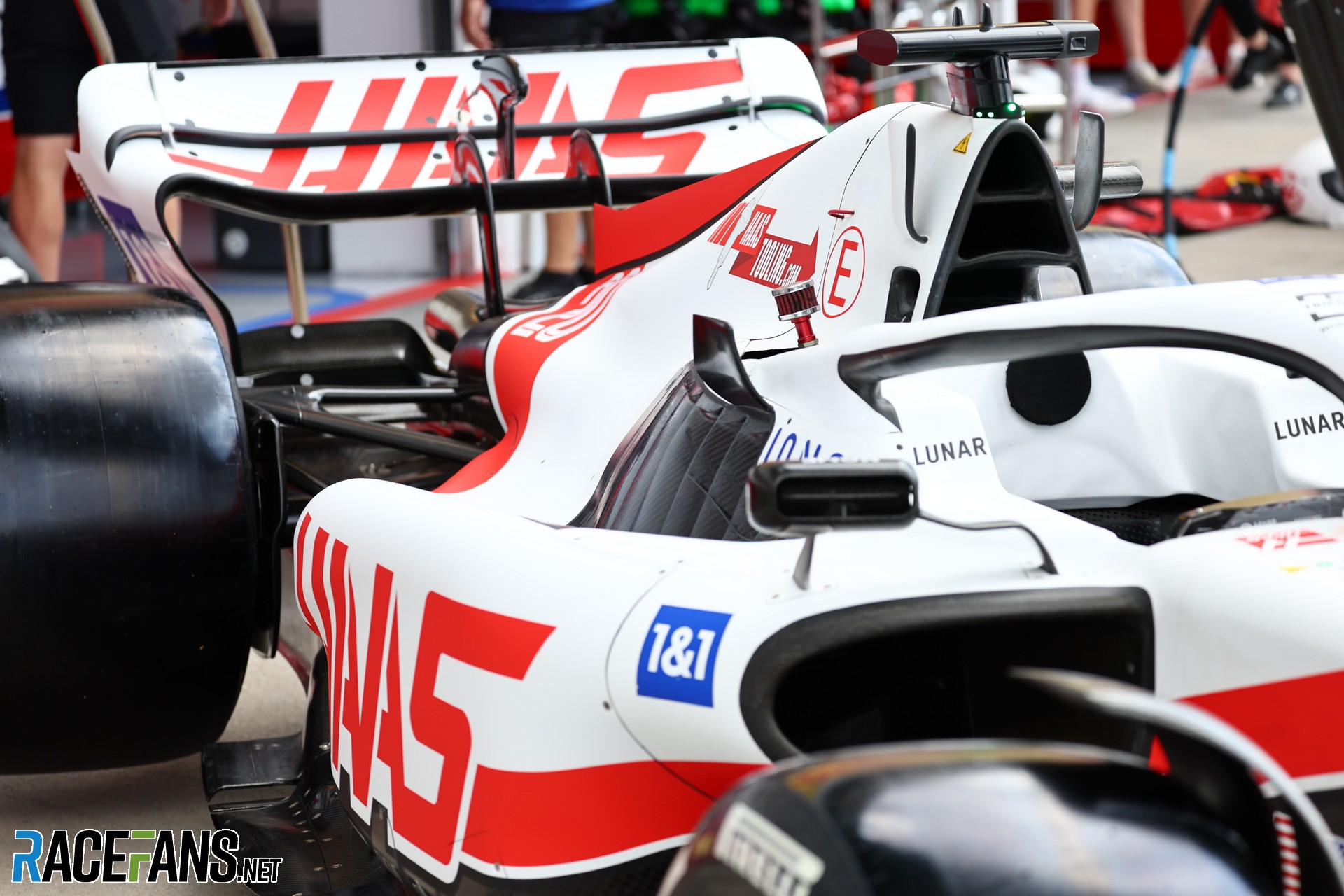 Haas has drawn inspiration from Ferrari for the major upgrade it has introduced to its VF-22 this weekend.

The team confirmed in documents supplied to the FIA it has brought a new floor, engine cover, cooling bodywork, rear suspension and other changes for this weekend. The new parts will be run on Kevin Magnussen’s car only.

Team principal Guenther Steiner admitted the team had taken inspiration for its upgrade from Ferrari’s design for its F1-75. “There are three concepts out there,” he explained. “There’s the Ferrari concept, the Red Bull concept and the Mercedes concept. In whole, the three big ones.

“We are closer to the Ferrari, so obviously we’re going to see what Ferrari has done and copy that one. But that took a little bit of time because they had to launch their car and do races and then we had to go into the wind tunnel to do testing looking at that car.”

Adopting Ferrari’s design philosophy was an obvious choice for Haas as it uses Ferrari’s power unit, gearbox and other components. “Obviously if you’ve got the same concept as Ferrari, you’re not going to copy the Williams, you know? You copy something which is similar.”

Haas’s update comes after the majority of teams have already introduced major changes to their cars. Steiner said the team took their time in order to ensure the upgrade proved a step forwards, having made a stronger than expected start to 2022.

“It takes a little bit longer, because you want to first see what the other ones do – what works, what doesn’t work. We took ourselves a little bit of time, because I said that I think we are in a pretty good place for where we maybe are supposed to be.

“We didn’t expect to come out this strong in the beginning. So let’s try to gain as much as possible and let’s look at what is out there and try to see which direction we can go in.”

Most of their rival teams have brought revisions to the rear of their cars for the high-downforce requirements of the Hungaroring. However Ferrari and Williams have brought no updates this weekend.

Description: “The slat helps control the flow over the halo ensuring the flow remains attached -improving flow to the rear of the car.”

Description: “Increases flow acceleration under the rear wing -increasing local load and drag. This is our max downforce rear wing appropriate for this track.”

Description: “Increases flow acceleration under the beam wing -increasing local load and diffuser load. This is our max downforce rear wing appropriate for this track.”

Description: “To accompany the upper rear wing elements typically selected for the Hungarian GP, a new beam wing geometry has been created for greater local load.”

Description: “Flow conditioning surfaces have been added to the underside of the floor to improve local flow structures across the operating range.”

Difference: “Revised outboard end of the beam wing where it meets the end plate.”

Description: “The offloaded outboard ends of the beam wing reduces drag with very little loss of downforce compared to the previous version of this type of beam wing (from Barcelona and Monaco).”

Description: “The revised rear wing tip geometry provides a better optimum performance for the specific characteristics of the Hungaroring circuit.”

Difference: “A new rear wing tip and associated changes to the rear wing and endplate.”

Description: “This wing is our maximum downforce wing to suit the low efficiency circuit characteristics at this event. It does this by increasing rear wing load.”

Difference: “Updated floor with reprofiled elements across the whole body.”

Description: “The redesigned floor, featuring updated elements and a reprofiled main body, generates more downforce while only marginally increasing drag, which should give a general performance advantage.”

Difference: “The main underbody and diffuser have changed substantially in flow area evolution.”

Description: “Development has allowed us to better interpret the 2022 regulations in order to increase downforce and better manage ride height sensitivities.”

Difference: “All the floor fences have been better optimised in curvature and orientation.”

Description: “The fences act to better condition flow development in the updated underbody. “

Difference: “The floor edge is broadly similar to our existing solution with many detailed geometric changes.”

Description: “The geometric changes are necessary to better condition edge flows which interact with the updated underbody.”

Difference: “The complete coke and engine cover is evolved with greater diffusion on the top deck and smoother transition between pod front and coke sidewall. At the rear we have introduced an additional cooling exit around the rear suspension legs”

Description: “The evolution of form allows us to better manage the flow incident to the downforce producing elements at the rear.”

Difference: “The new coke shape results in an evolution of louvres which cover the cooling range required for the remainder of the season”

Description: “The louvres on the new bodywork are better distributed to avoid unfavourable interaction of cooling flow with the downforce producing elements at the rear. “

Difference: “The rear suspension legs have had a complete revision of their aerodynamic fairings”

Description: “The revision to the suspension fairings are necessary to best align to onset flows conditioned by the new bodywork upstream. This better conditions flow feeding the rear corner and beam wing”

Difference: “The rear brake has been redesigned at the leading edge lip and the winglets have been revised in number and profile/camber details.”

Description: “The new rear brake duct lip reduces flow losses incident to the winglets which lie behind it. The improved flow to the winglets has allowed evolution of the profiles to increase local load and better manage their wake interaction with the rear wing.”