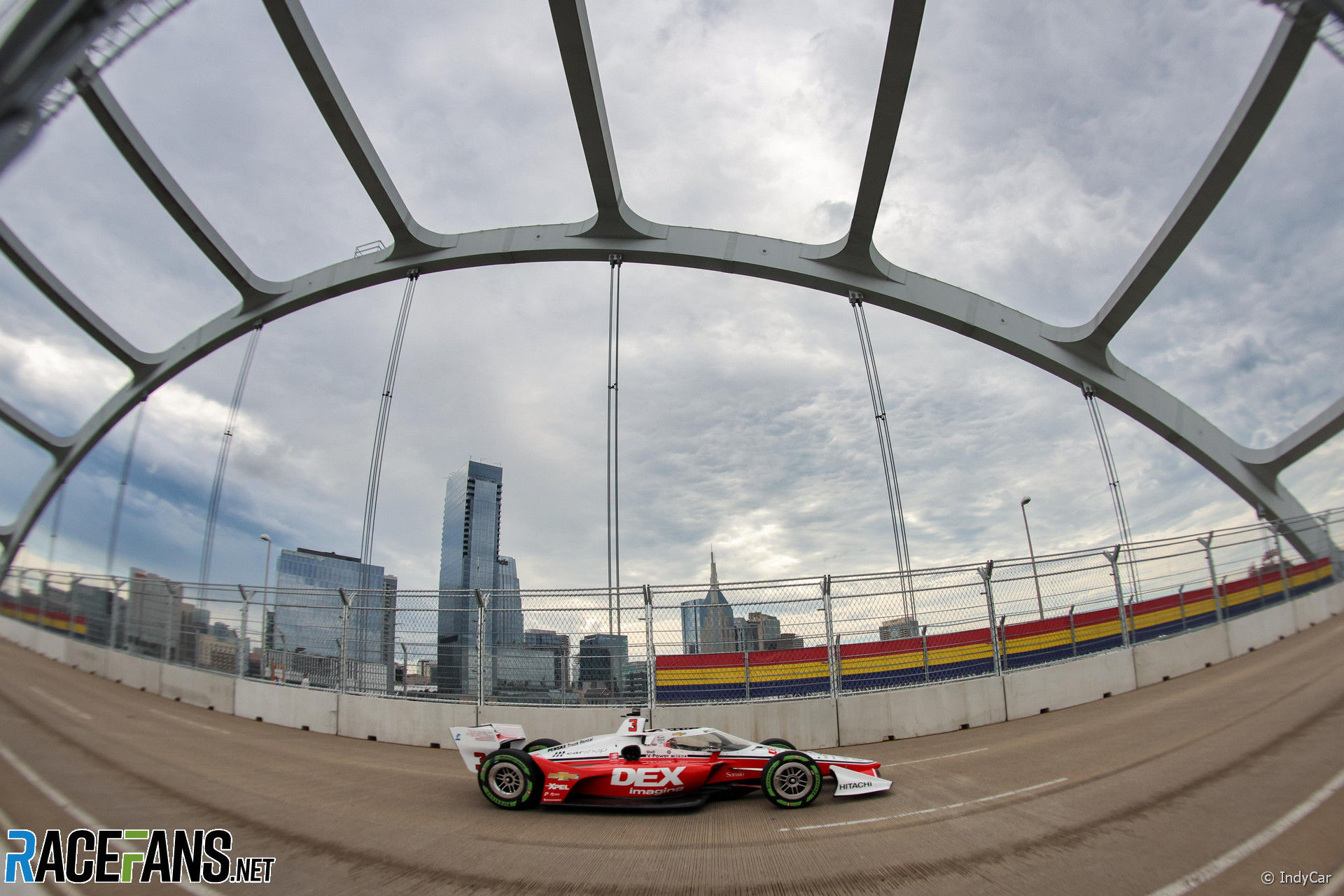 Delayed 90 minutes due to lightning strikes and heavy rainfall, qualifying for the Music City Grand Prix in Nashville, Tennessee proved to be worth the wait. A rapidly evolving track produced drama in every session, and Scott McLaughlin took his second pole of the season ahead of Romain Grosjean.

In a “last over the line” style Fast Six shootout held under a beautiful summer sunset, rookie Christian Lundgaard took provisional pole just before the chequered flag. But on their final flying laps, Grosjean and then McLaughlin went even quicker.

Ultimately, it was a perfect 1’14.5555 from McLaughlin that won him his first pole position since the season opening Grand Prix of St. Petersburg, on a temporary street circuit.

Grosjean, with his second place qualifying effort, earns his best starting position since joining Andretti Autosport this off-season. The ten-year Formula 1 veteran has struggled at times in his first season with Andretti, but has an opportunity to finally capture his first win in the series.

As does Lundgaard, who qualified a career-best third place – despite suffering a severe lockup into turn four heading west off the Korean War Veterans Memorial Bridge, which disrupted his Fast Six session momentarily.

Championship contenders rounded out the rest of the top six, with reigning IndyCar champion Álex Palou in fourth, Pato O’Ward in fifth, and Nashville native Josef Newgarden in sixth. Newgarden enters the weekend third in the standings, while O’Ward and Palou are fifth and sixth respectively.

O’Ward advanced to the fast six after Will Power had his fastest lap in second-round qualifying deleted for causing a local yellow at turn four, which affected O’Ward’s lap. Instead of starting in the front three rows, Power will now start eighth, next to rookie David Malukas. Graham Rahal qualified in ninth, Rinus VeeKay – recently extended at Ed Carpenter Racing – was tenth, followed by Jack Harvey in 11th, and in a great surprise, Dalton Kellett advanced to second-round qualifying for the first time in his IndyCar career and will start 12th.

Two big hitters out of the Chip Ganassi Racing stable will start further back, including championship leader Marcus Ericsson, who missed the cut in first-round qualifying groups and will line up 18th on the grid. However, Ericsson won last year’s chaotic, incident-strewn Music City GP from 18th on the grid after launching skyward off the rear of Sebastien Bourdais’ car earlier in the race.

In the first round, group one qualifying was disrupted by two red flags involving Andretti Autosport drivers. Early on, Devlin DeFrancesco stopped and stalled in turn four. In the closing minutes, Colton Herta went in too quickly and crashed into the tyre barriers. Both cars had their two fastest lap times deleted and did not advance. The decision was made to not restart the session after Herta’s accident, much to the ire of drivers such as Callum Ilott, who was on the wrong side of the cut line, and Simona de Silvestro, who didn’t set a time.

De Silvestro will start 21st, ahead of Herta in 23rd, and DeFrancesco in 24th – who moved up a place because Hélio Castroneves, who was 24th in the final classification, has to drop to the rear of the field due to a six-place grid penalty for an engine change.