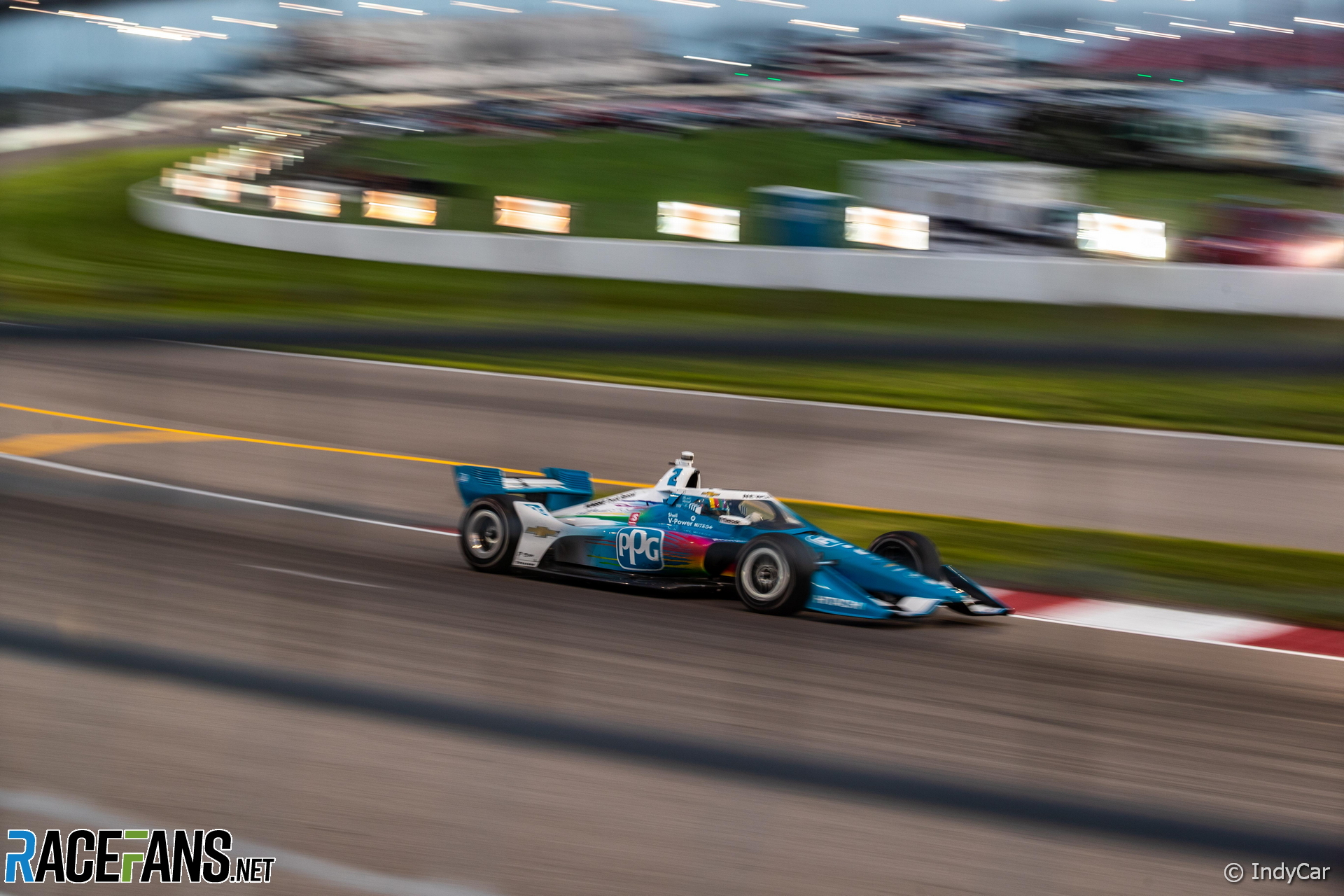 After 260 laps of racing, a two-hour red flag for inclement weather, and a perfectly timed overtake on the final restart, Josef Newgarden won his fifth race of the 2022 IndyCar Series at Gateway Motorsports Park.

Newgarden appeared to have lost the race on the final round of pit stops. He was leading ahead of his Penske team mate Scott McLaughlin, but after their last green flag stops, it was McLaughlin who had the race lead.

On lap 215, the caution flag was waved for moisture on the 2 kilometre oval track. Two laps later, the red flag was shown. Enough of the race had been completed to declare it official from there.

Instead, IndyCar opted to try and complete the full 500 kilometre race, and the finish did not disappoint.

Newgarden was given a second chance to take a crucial victory in his championship pursuit. When the race restarted on lap 225, the two-time IndyCar champion overtook McLaughlin around the outside of turns one and two to grab the lead of the race.

After leading 78 laps, Newgarden held on for a statement victory, one that puts him within three points of his championship-leading team mate, Will Power, who finished in sixth.

Power, the pole sitter for this race, led a total of 128 laps early on, until shortly after the first caution of the race. With the threat of rain looming at the time, Penske opted to split the strategies of their three cars during the caution for Jack Harvey’s single-car accident in turn four.

They left Power out and brought McLaughlin and Newgarden in for fresh tyres, and in a matter of laps, Newgarden found his way to the lead, while McLaughlin settled into second place thanks in part to a daring four-wide pass into turn four.

The other incredible story of the late stages of the race was the second place finish for rookie David Malukas. Malukas pitted just before the rain came down, as did his Dale Coyne Racing stable mate Takuma Sato.

When the race restarted, Malukas had the benefit of tyres that were 20 laps newer than those on the cars in front of him. He took the restart in fifth, picked his way past Sato and Pato O’Ward, then on the last lap, set up a daring overtake around the outside of turns one and two to grab a career-best finish and maiden IndyCar podium.

Malukas is now just 11 points behind Christian Lundgaard in the Rookie of the Year standings; Lundgaard finished 19th in his first trip to Gateway.

Behind Newgarden and Malukas, McLaughlin finished in third, with O’Ward in fourth, and Sato rounding out the top five ahead of Power.

The Chip Ganassi Racing trio of Marcus Ericsson, Scott Dixon, and Alex Palou finished seventh, eighth, and ninth, in that order. Dixon is just 14 points behind Power at the top of the championship table, and Ericsson is just a further three points behind. Seven drivers remain mathematically eligible for the championship, but there is now a clear gap between the top four, and the trio of Palou, McLaughlin, and O’Ward in that pursuit.

Palou is now 43 points behind Power, McLaughlin is 54 behind, and O’Ward trails by 58.

Graham Rahal rounds out the top ten finishers in tonight’s St. Louis 500 kilometre race. There was only one official retirement, as Rinus VeeKay dropped out after 53 laps with a mechanical failure. Alexander Rossi and Conor Daly’s races were also hampered by mechanical issues.

There are now just two races left in the season, and the Grand Prix of Portland is next on the schedule, taking place on 4 September.

4 comments on “Newgarden waits out rain delay to win in Gateway, close within three points of Power”