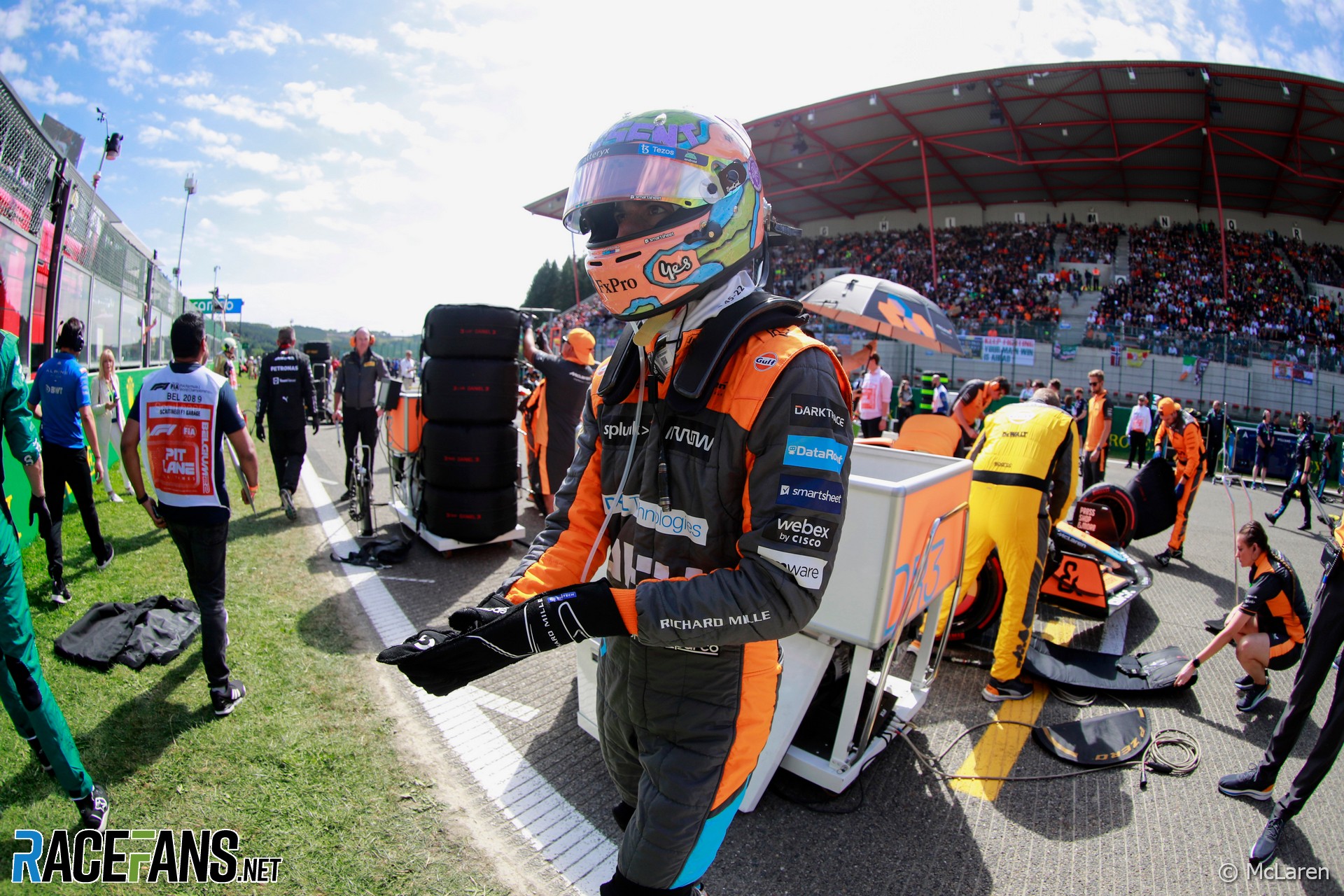 In the round-up: Daniel Ricciardo said that he was just happy to be on the Belgian Grand Prix starting grid after what “hasn’t certainly been the most fun weekend.”

Ricciardo said he put the distractions of the recent announcement he would split with McLaren at the end of this season behind him during this weekend’s Belgian Grand Prix.

“It hasn’t certainly hasn’t been the most fun weekend going through all this,” he told media including RaceFans after the race. “But at the same time, it was it was nice to get back in the car and just try to put everything behind me and have a bit of fun.”

Although he finished out of the points, Ricciardo said it was satisfying to return to the cockpit and is hoping for an enjoyable end to the season after his often disappointing year-and-a-half with the team.

“When all the red lights were going on today, I was smiling, and I was just happy to to be in that moment again,” he said. “I don’t think my start was that good, I think I still dropped down and it was a pretty terrible start, but there’s certainly some parts of it I enjoyed.

“But yeah, I’m glad that the bulk of this announcement is done and hopefully gets a bit more fun for the last eight.”

Alfa Romeo believe Bottas was on course for points

Alfa Romeo believes Valtteri Bottas would have had the correct strategy to score points at the Belgian Grand Prix had he not been forced to retire after ending up beached in a gravel trap while trying to avoid a collision with Nicholas Latifi.

“Our plan was to use soft, medium, medium, in the position that he was P13 on the grid,” explained head of trackside engineering Xevi Pujolar. “Then we think that, if you look at the strategy that Max did and also what we did with Zhou, then we think he should have been fighting for the points.

“Where exactly then is always ‘if, if’ over a lot of things but for sure [there was] potential to fight for the points, at least at the head of that group with Albon.”

Felipe Drugovich extended his Formula 2 title lead considerably in Spa, drawing out a 43-point gap over Théo Pourchaire. Although Drugovich is not linked to any F1 team he said he is not concerned whether, like 2019 F2 champion Nyck de Vries, he might fail to win promotion to the top flight next year.

“I think getting into F1 nowadays is very, very difficult and it’s looking that the opportunities for a main seat in F1 next year [are] obviously very limited. But I think there is still that potential reserve seat somewhere.

“So we need to try and look at that and to find maybe a reserve seat somewhere, and other than that, there are other categories that we can drive somewhere else. But for now I’m just focussed on this championship, trying to win this, and then hopefully this result might get me into F1 some some day.”

Formula 2 and 3 drivers given post-race penalties

Enzo Fittipaldi has been given a five-second time penalty for leaving the track and gaining a lasting advantage in a lap-long battle with Liam Lawson during the Formula 2 feature race. Although Fittipaldi returned the position to Lawson two laps later – and immediately attacked his rival for the position again, narrowly failing to retake it – the stewards deemed Fittipaldi had held the advantage too long. The penalty drops him from a fifth place finish to tenth.

In Formula 3, David Vidales was given a one-place finishing position drop for also leaving the track and gaining a position over William Alatalo. The two swap places in the finishing order for the Spa feature race, putting Vidales back to eighth.

Kush Maini has also been penalised for an incident during the F3 feature race and will face a five-place grid penalty at the Zandvoort round for causing a collision in the opening laps.

I disagree. By the time they were at Les Combes it was two cars fighting for position and it should have been regarded that way. I think Hamilton's lucky not to have a grid penalty for Zandvoort.https://t.co/0NveholFsI #F1 #BelgianGP

STATEMENT: During today’s Millers Oils Ginetta GT4 SuperCup race at Thruxton a serious incident occurred involving the No. 78 & No. 20 cars.

As a result of the impact, the drivers involved, Colin White and Mike Brown, were taken to hospital for care and are in stable condition.

'Whether a Gasly-Alpine deal is realistic or not, Yuki Tsunoda’s future is uncertain and Red Bull is understood to have inquired about Herta’s availability with the potential for him to land at the junior team.'

Hitech GP won every race in a British Formula 4 weekend for the first time as Alex Dunne claimed victory in race three at Thruxton. Dunne won the first race on Saturday and team-mate Oliver Stewart won the second, then Dunne doubled up in Sunday’s sole encounter.

The two-day event will give drivers an early opportunity to get to grips with the championship’s industry-leading Tatuus-Abarth-Pirelli package and begin building up testing mileage around the Norfolk circuit’s 2.96-mile '300' layout.

'Nathan is making small steps and is currently largely breathing for himself, but remains in a coma. Here you can donate to help raise funds for Nathan's recovery.'

After Charles Leclerc took full responsibility for his post-race penalty for pit lane speeding, Keith Campbell says that Ferrari’s decision to bring him in for an attempt to take fastest lap nonetheless deserves its own scrutiny.

The speeding penalty is on him, but the decision to pit was too risky given the circumstances. Even with a normal pitstop they lost track position to Alonso on the penultimate lap, which was likely going to at least cause a disruption to his fastest lap attempt.

There was also the risk of a slow stop due to a sticking wheel nut or whatever else which also would have cost them the same position. Ferrari’s risk/reward calculation seems to always be off.
@keithedin