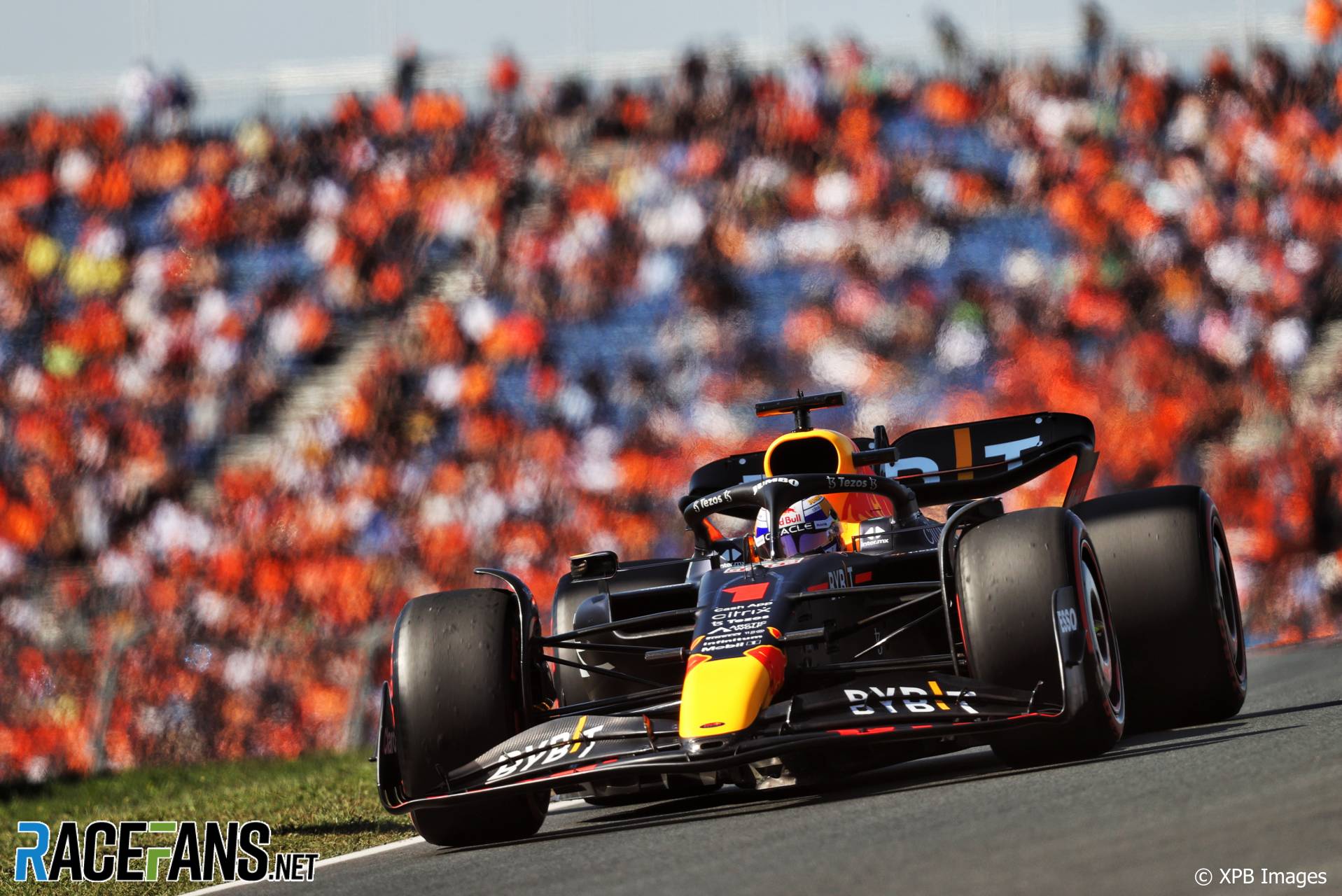 What appeared to be a tiny mistake at turn nine on his final Q3 lap cost Leclerc a tenth of a second, which allowed Verstappen to pip him for pole by just two-hundredths of a second. Carlos Sainz Jnr will start from third on the grid, with Lewis Hamilton, Sergio Perez and George Russell behind.

It was a beautiful summer afternoon at Zandvoort as the green light at the end of the pit lane signalled the beginning of the qualifying hour. The opening minutes of the session were fairly quiet, with none of the expected pole position contenders heading out of their garages in the first minutes.

That allowed the two Aston Martins of Lance Stroll and Sebastian Vettel to set the early pace, Stroll going quickest with a 1’12.505. That was beaten by Daniel Ricciardo’s McLaren, who pipped Stroll by just 0.015s, before the frontrunners began their first laps of qualifying.

Max Verstappen immediately went fastest, setting a blistering benchmark of a 1’11.317. The Ferrari of Carlos Sainz Jnr managed to get just within half a second of Verstappen’s time, but Fernando Alonso beat his fellow Spaniard by one tenth of a second.

The Mercedes of George Russell and Lewis Hamilton headed out onto the circuit and moved into second and third respectively, both around a quarter of a second slower than Verstappen. They were both beaten by Charles Leclerc, who improved on his best time to go just over a tenth of a second off Verstappen in second place.

With five minutes remaining in the session, the drop zone consisted of Vettel, Ricciardo, Alexander Albon, Mick Schumacher and Nicholas Latifi. Albon took advantage of a clear track to improve from 18th to seventh, bumping Kevin Magnussen into danger of elimination in 16th. The Haas driver improved on his final attempt to jump safe, as did team mate Schumacher, which dropped Esteban Ocon and Lando Norris into the drop zone.

Bottas appeared to move himself clear with a lap good enough for 12th, dropping Pierre Gasly into danger. Ocon improved to go safe, as did Norris and Gasly. That bumped Bottas back into elimination in 16th place and ended his chances of progressing.

The Alfa Romeo driver was therefore eliminated, while Ricciardo joined him in 17th, half a second slower than team mate Norris. Magnussen was also knocked out in 18th after his final lap was deleted for track limits at turn three, though it wouldn’t have been good enough to get him into Q2. Vettel went across the gravel at the exit of turn 13 on his final lap, ensuring he went no further. Latifi, who complained earlier in the session he was getting repeated ‘cool the car messages’, also went out in 20th place.

The second phase of qualifying got underway with Albon heading out onto the circuit to take advantage of the quiet and clear road, but he was denied the opportunity to set a flying lap in peace when the session was red flagged. The reason was quickly revealed to be due to an orange smoke flare which someone thoughtlessly threw onto the track on the run between turns 12 and 13. Albon was forced to abandon his run.

After the offending debris was quickly cleared away, and the offending spectator taken away, the session resumed with just under 14 minutes remaining. Albon rejoined the circuit, but this time was joined by the two Red Bulls of Verstappen and Perez. Verstappen’s lap was the quickest of the weekend, a 1’10.927 to break into the 1’10s for the first time in the weekend. Perez was almost four tenths of a second slower than his team mate at the end of his run.

Then it was the Mercedes’ turn, with Hamilton going second quickest after his first flying lap, a tenth-and-a-half slower than the Red Bull, with Russell managing fourth behind Perez after his first lap. The Ferraris went out on the soft tyres they had used in Q1, but could only manage seventh and ninth, putting them at risk of others’ improving. Lance Stroll was among those who placed ahead of them, impressively jumping up to fourth position after his first flying lap of the session in the Aston Martin.

As the minutes ticked down and the track fell quiet again, Gasly and Ocon again found themselves in the drop zone, with Zhou Guanyu, Yuki Tsunoda and Schumacher’s Haas also set to be eliminated if they were unable to improve. On the bubble in tenth, Albon yet again chose to run on an empty lap and improved his personal best, but remained in that perilous tenth position.

Zhou was the first of the drivers in danger to complete his final lap, moving from 13th into the temporary safety of tenth place, knocking Albon into 11th and out. Schumacher also improved to go ninth, which sealed Zhou’s fate.

Ocon moved into safety, but only briefly, as Tsunoda’s final lap was good enough to put him into tenth, which dropped Ocon and also team mate Alonso into danger. Gasly was the final driver to complete his lap, having urged his team to send him out late, and could not improve by enough to go safe, leaving him the first driver eliminated from Q2 in 11th behind his team mate. Ocon therefore went out in 12th, ahead of team mate Alonso, who failed to improve on his final flying lap after complaining Perez got in his way at turn eight.

With the top five drivers in Q2 separated by a handful of tenths in the second session, the final phase of qualifying looked set to be one of the most competitive of the season so far. When the final 12 minutes began, Verstappen was the final driver to exit the pit lane and head out for his first run, with team mate Perez following not far behind.

The championship leader’s first flying lap was a 1’10.515 – comfortably the fastest lap of the weekend. Using a scrubbed set of tyres, Perez could not get within half a second of his team mate on his first run, but he was at least a full second faster than Norris at the end of the McLaren’s first run.

Russell also attempted his first lap on used tyres and he crossed the line just under a tenth slower than Perez, while Hamilton made the most of fresh softs to go second, a tenth behind Verstappen. Finally, it was the turn of Ferrari to complete their first runs, with Leclerc jumping to provisional pole position with a 1’10.456, half a tenth faster than Verstappen’s first time. Sainz could only put his Ferrari fourth for his first flying lap.

In the final minutes of the session, the field began to venture out onto the circuit for the final time, with Leclerc leading the pack out of the pit lane and Verstappen ahead of Sainz with the two Mercedes behind. Another flare landed on the track, but this time it rolled away and after a brief yellow flag the track went green again.

That turned out to be fortunate for Verstappen. Leclerc went fastest of all in the opening sector but a mistake in the middle sector cost him time. He crossed the line to improve his own pole time by just under a tenth, leaving the door open for his Red Bull rival.

The local hero did not need an invitation and squeaked ahead of Leclerc by just 0.021s to snatch pole position to the delight of his legion of fans in the grandstands. There was still time for Perez and the Mercedes pair to improve, however a mistake from Perez at turn 13 saw the Red Bull spinning across the track and bringing out the yellow flags, which ruined the final flying laps of the Mercedes behind and guaranteed Verstappen took a second consecutive home pole position.

Leclerc was frustrated to settle for second place after being told he lost a tenth of a second with his mistake in the middle sector. Sainz secure third on the grid, ahead of Hamilton’s Mercedes, with Perez and Russell ending up in fifth and sixth after Perez’s late error.

Norris took seventh on the grid, ahead of Schumacher and Tsunoda, with Stroll left stranded in tenth after a technical problem meant he was unable to take part in the final session.

RaceFans s run thanks in part to the generous support of its readers. By contributing £1 per month or £12 per year (or the same in whichever currency you use) you can help cover the costs of creating, hosting and developing RaceFans today and in the future.