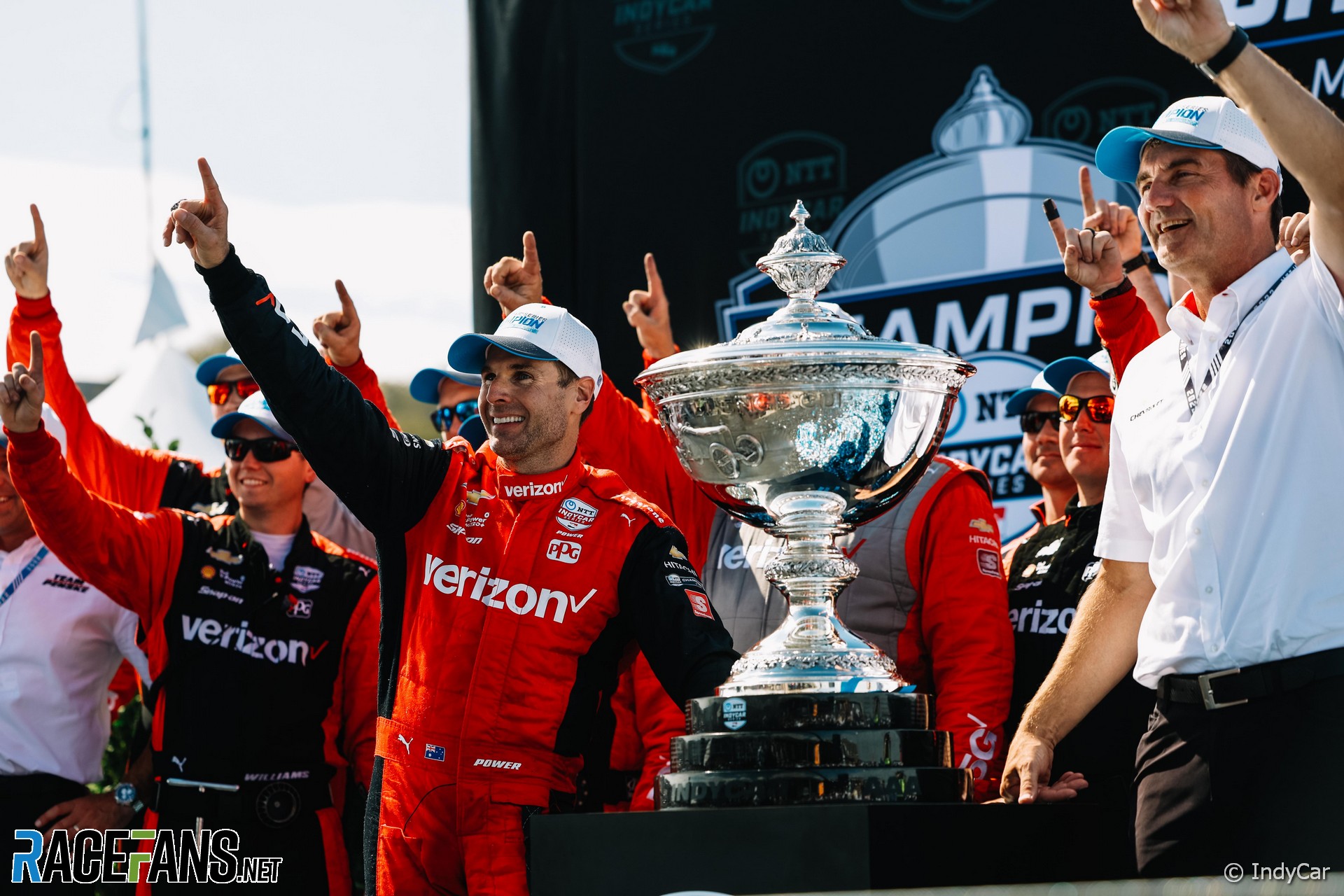 The 2022 IndyCar Series was touted by many – not least ourselves – as the stage for the coronation of a powerful youth movement led by champion Álex Palou, Colton Herta, and Pato O’Ward. Naturally, when the season ended Sunday at Laguna Seca Raceway, it was 41-year-old veteran Will Power who defied all of that reasoning and became a two-time champion in the highest level of American single-seater racing.

Wait, what? Will Power, the same man who came off the worst season of his career since he joined Team Penske in 2009? The same driver whose early-season struggles kept him from being a championship factor for several years, and whose ultimate upside should have been no more than an obligatory late-season victory?

The same uncompromising, fiery driver prone to emotional outbursts when things don’t go his way – chief among them, his infamous two-finger gesture directed towards former race director Brian Barnhart after the farcical 2011 New Hampshire race? That Will Power?

It’s true: Power now has one championship for each of those middle digits on his hands, and it was because of a well-documented shift in attitude and approach for the senior driver of the Penske team.

“In the past I would have been really pissed off. When your team mates are winning – that was a big change, it’s like, ‘I don’t care. I’m going to weather their storm while they’re having a good run.’ That in itself was a mental change. It’s like, I’m not getting pissed off with a top four, where before I would have been after the race, just seething.”

Power opened up about his new, calmer attitude many times early in the season, and many within the Penske organisation – Cindric, managing director Ron Ruzewski, even the legendary Rick Mears (a Penske advisor) can all corroborate that this wasn’t just a gimmick spawned from a hot start to the season.

There were moments that tested Power’s new-found patience, for sure. He wasn’t much pleased with rookie Devlin DeFrancesco after being spun out early at Road America, but their conflict never escalated beyond a car-to-car tap on the cooldown lap, and comments from Power that were more like a father disappointed in his child. It never carried over beyond the weekend.

Mediocre runs at Toronto and the Indianapolis 500, where Power was virtually a non-factor for victory, could have also tested IndyCar’s ‘master of Zen’.

Those three races were the rare low points of a remarkably consistent 2022 season for Power. He only won one race, a close victory on the streets of Belle Isle in Detroit. But he also completed all 2,268 possible laps of racing, finished on the podium nine times (more than any other driver), and had 12 finishes in the top four.

In a year where every major title contender had at least one unflattering moment in their campaigns, it was enough to get Power over the line, 16 points ahead of team mate Josef Newgarden – whose series-leading five wins were negated by early season inconsistencies and a crash at the Iowa 300 while leading.

Power reinvented himself as most of his would-be adversaries lost their heads. Take Mid-Ohio, for instance. While everyone stared in amazement at Romain Grosjean and Alexander Rossi taking their intra-team conflict on-track, Power recovered from a first-lap spin and went from the back of the field to finish in third. It proved to be a crucial recovery in his championship bid.

Power’s other career trait remained his remarkable qualifying form, and if that seemed not quite up to his usual high level, he still collected five pole positions, more than anyone else this year. The last, crucial one came at Laguna Seca on Saturday, and surpassed Mario Andretti’s 36-year-old record.

“Let me tell you, in the off-season my wife said to me ‘I believe you’re going to beat Mario’s record, and you’re going to win the championship’,” Power recalled. “And it actually gave me confidence that I could do it, the fact that she said that. That’s how much confidence I have in her gut feel.”

A similar conversation 14 years ago, between Will and his then-girlfriend Liz, saved his career in America. After the first unified season of IndyCar in 2008, Power was dropped by KV Racing, and was close to taking his talents to a floundering A1GP series.

“She told me to get out of that contract because, ‘Penske or Ganassi might call you,’ Power recalls of that conversation with his future wife.

Helio Castroneves’ tax evasion trial in the winter of 2008-09 opened the door for Power to get the break of a lifetime with Penske. His performance in relief at St. Petersburg was so strong that Penske immediately expanded to running a third full-time car to accommodate Power once Castroneves returned to action.

More than just the signature number 12 and telecom sponsor Verizon, several members of Power’s team have been with him since the beginning, if not longer. People like Cindric and Ruzewski, as well as data engineer Robbie Atkinson, who’s been working with the number 12 team since 2010. Engineer David Faustino has been working with Power since his second full season in the Champ Car World Series in 2007, when they were at Walker Racing.

Back in 2014, a high-strung Power was likely obsessed with nothing more than his own legacy and proving that he could win a championship. He did that, then four years later, proved he could also win the Indianapolis 500, roaring into his radio as he proved the doubters wrong again.

This season, it wasn’t about proving anyone wrong, but about rewarding those who’d been in his corner with another championship – as unlikely as it may have seemed heading into 2022.

“They deserved another championship,” Power said of the people behind the scenes that have guided his time at Penske. “These guys are extremely good at their jobs, and I didn’t want to ruin it for them.”

“We actually worked better this year together than ever, really,” Power said of Faustino. “Think about it, he’s been with me since ’07, so I think he’s probably seen a slow progression of maturity, and this year he’s seen absolutely top level of that – because he’s obviously heard me on the radio for years, he’s been in that engineering office for years. We’ve got a lot of respect for each other.”

That’s 260 races over 18 seasons worth of experience, going back to a late-season call-up in 2005. How long Will Power can keep it going after his current contract ends in 2023 – if at all – isn’t quite certain, and he knows that one day it’ll come to an end.

But it was satisfying to see one of IndyCar’s most uncompromising competitors of recent memory turn over a new leaf, and in doing so, roll back the years and cement his place as one of the greatest of his era, or any other.

5 comments on ““I didn’t want to ruin it for them”: How Power repaid his crew with second IndyCar title”