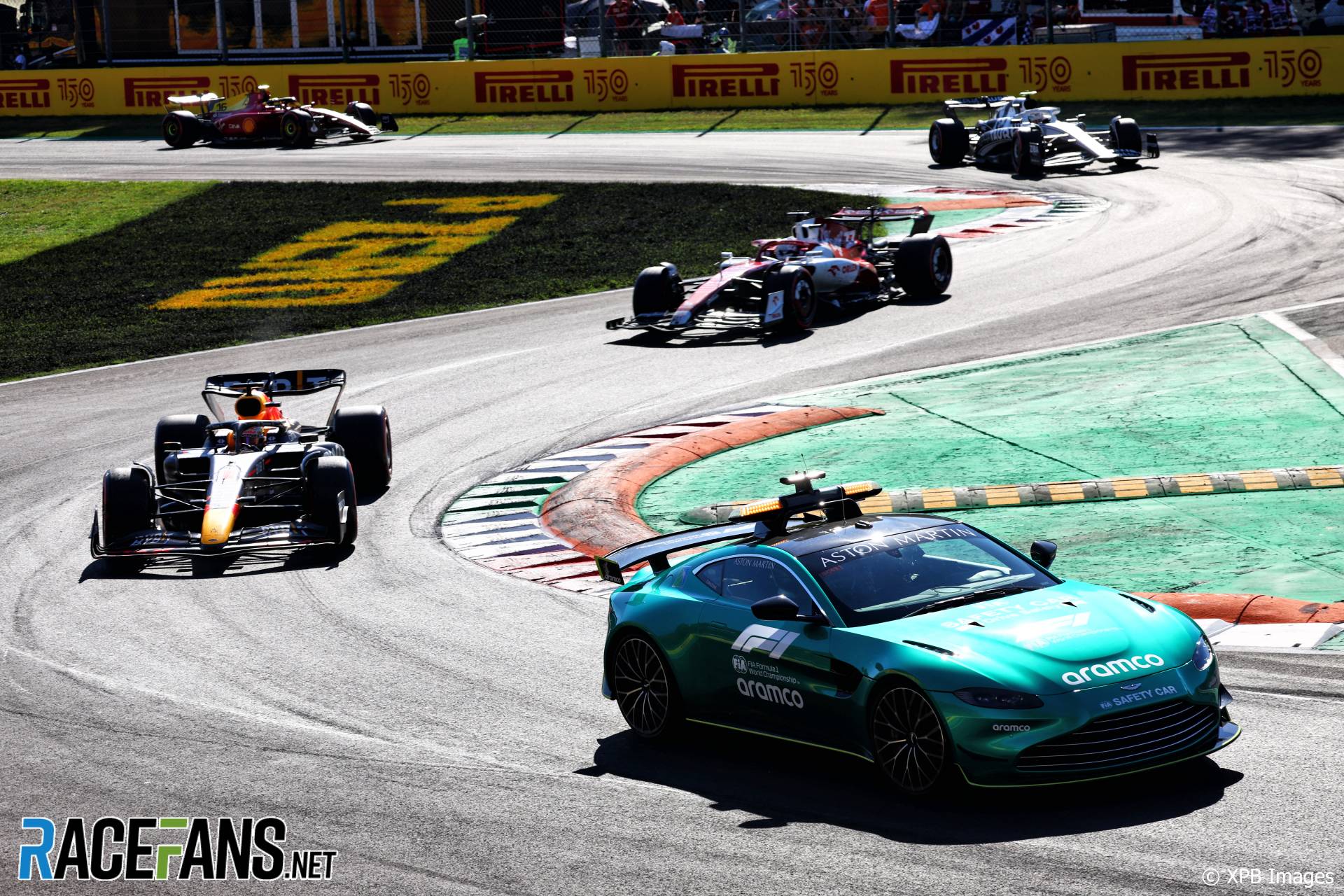 Formula 1 teams were waiting for the Italian Grand Prix to restart but as the final laps ticked down it became increasingly clear something had gone wrong.

To the frustration of most drivers in the field, the race never restarted, and the Safety Car continued to circulate at the front of the field, finally peeling off just in time for the chequered flag to be waved.

The top three drivers in the queue all pounced on the opportunity to pit. Lewis Hamilton, running fifth, stayed out. But as their radio messages show, none of them expected the race was essentially over at that point.

But behind race leader Max Verstappen and pursuer Charles Leclerc, something had gone awry. Instead of appearing at the front of the field, the Safety Car was running ahead of third-placed George Russell.

The delay in reorganising the field behind Verstappen added to the delay of clearing the stranded McLaren of Daniel Ricciardo, which had caused the Safety Car period in the first place. When that happened, six laps before the end of the race, the drivers were quickly alerted to the possibility of a decisive late-race restart.

While Hamilton stayed out, Russell came in. He was the first of the leading trio to do so, as Verstappen and Leclerc had already passed the pit lane entrance when the Safety Car was deployed. There was nothing unusual about this: the rules state the Safety Car will join the track “regardless of where the leader is.”

After rejoining the track, Russell caught the Safety Car. Under these circumstances the FIA’s observer situated in the Safety Car is supposed to “use a green light to signal to any cars between it and the leader that they should pass”. This should happen once “ordered to do so by the clerk of the course.”

Mercedes told Russell he should be allowed to pass the Safety Car but the driver pointed out he wasn’t being given the necessary signal to overtake. He was at the point of taking it upon himself to do so anyway when Mercedes advised him they should stick to the rules.

Behind him second-placed Leclerc was eagerly anticipating a restart, and Ferrari were hopeful they’d be ready to race again with up to four laps remaining:

The drivers continued in the same order, Russell still waiting to get the signal to overtake the Safety Car. Meanwhile the recovery of Ricciardo’s car was continuing, the marshals at the scene having discovered the McLaren had stuck in gear and needed a crane to be moved out of the way.

The FIA later said this was the reason why a restart never happened. “While every effort was made to recover car number three [Ricciardo] quickly and resume racing, the situation developed and marshals were unable to put the car into neutral and push it into the escape road,” an FIA spokesperson explained.

“As the safety of the recovery operation is our only priority, and the incident was not significant enough to require a red flag, the race ended under Safety Car following the procedures agreed between the FIA and all competitors. The timing of the Safety Car period within a race has no bearing on this procedure.”

However several teams pointed out there was more to the problem than the recovery of Ricciardo’s car. “That wasn’t the problem with the with the Safety Car procedure,” said Alpine sporting director Alan Permane.

“It looks like the Safety Car picked up the wrong car. But that’s quite easy to rectify very early on and I don’t quite understand why they toured around and then let everyone form up.

“I need to look at it, I don’t want to bad-mouth race control or anything, but I think we had something like six, seven laps to go when it came out so I would have thought a couple of laps to form up and a lap or two to let the lapped cars overtake and then you’ve got a three-lap sprint or something, which would have been quite entertaining. So I don’t know what went wrong with it.”

Finally Russell got the signal to pass the Safety Car. But he and the other drivers following him had to overtake it, cover a lap of the track and rejoin the back of the queue before a restart could be ordered.

Given the time it had taken to get past the Safety Car and being forming up the queue, Mercedes were now doubtful there would be a restart at all.

Verstappen, following the Safety Car, was concerned it was going too slowly and said it should speed up. But the prospects of the race restarting at all were now as good as gone, to Leclerc’s obvious frustration:

Leclerc fumed at the hold-up which had thwarted a restart, while Hamilton wondered whether the rules could be changed to prevent the same happening again in the future.