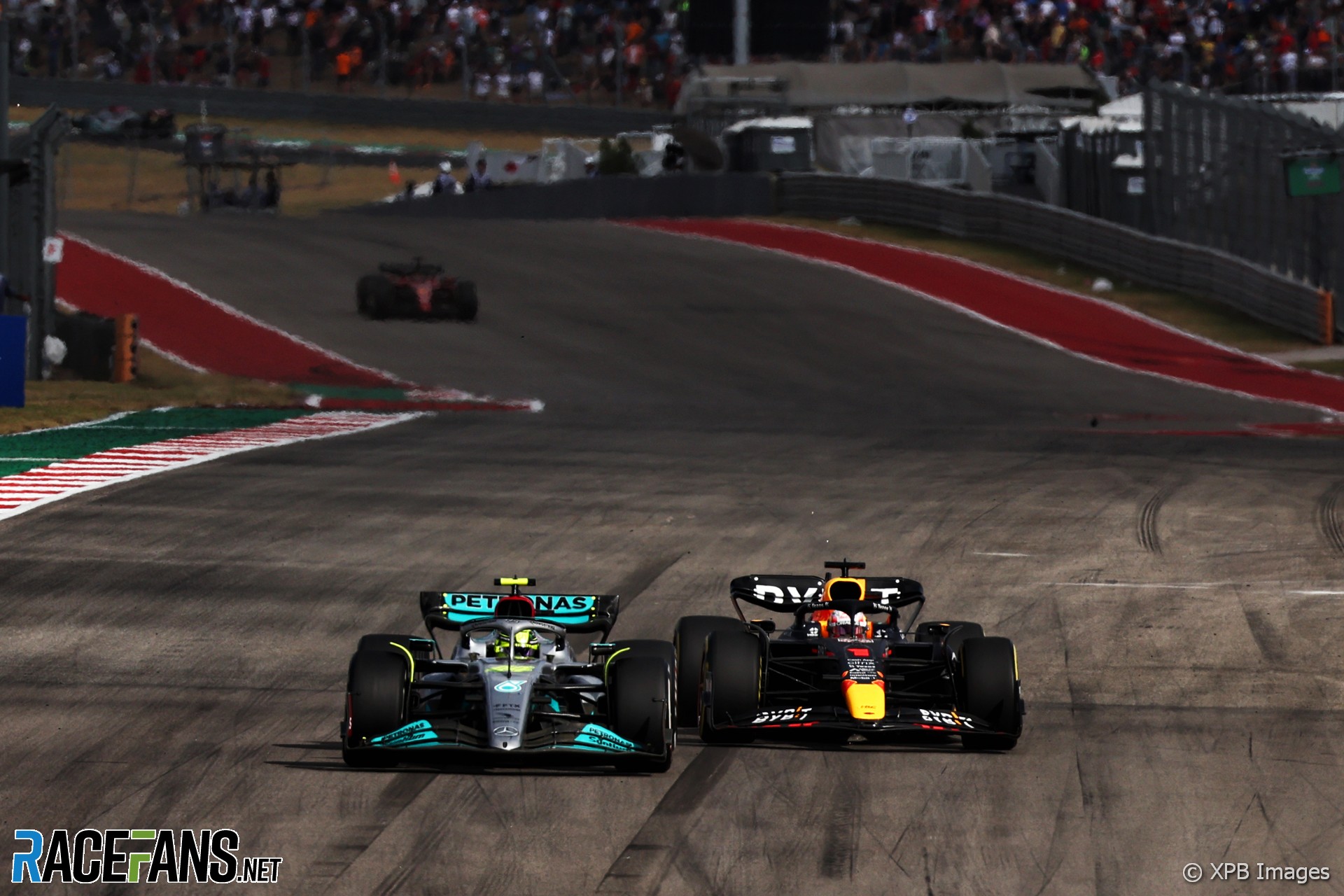 Lewis Hamilton had a rare chance in 2022 to win in Sunday’s United Grand Prix after Max Verstappen’s race was compromised by a slow pit stop.

The Red Bull driver fought back to win, but there was tension in the final laps as he had strayed beyond track limits three times during the course of the race and was at risk of a five-second penalty which could have cost him his victory. Behind, Hamilton was keeping a close eye on how well Verstappen stayed within the lines, and ensuring his team and race control did not miss any potential infractions.

Transcript: Hamilton vs Verstappen in the United States Grand Prix

Verstappen and Hamilton started second and third. However they were soon in contention for the lead, as pole-winner Carlos Sainz Jnr started slowly and was hit by George Russell.

The pair started on the medium compound tyres and over the opening laps it quickly became clear Hamilton did not have the pace on that rubber to keep up with Verstappen.

Red Bull could see Hamilton is using up his tyres in pursuit of Verstappen and tell their driver he can afford to push harder. Verstappen responds and begins to pull away from Hamilton by three to four tenths of a second each lap.

Mercedes spot the lap times are beginning to drop off and, as he is already five seconds behind Verstappen, call Hamilton in for his first pit stop.

Verstappen takes half a second less than Hamilton to complete his first pit stop, adding to his lead as he returns to the track.

Verstappen is now back in the lead but has collected his first warning for exceeding track limits. Four warnings typically leads to a five-second time penalty.

A gust of wind catches Valtteri Bottas out at turn 19 and he spins into a gravel trap, triggering a Safety Car period.

Mercedes changed parts of Hamilton’s front-left brake on the grid because he noticed a difference in their stopping power during his pre-race reconnaissance laps. A similar problem resurfaces during the Safety Car period.

In the previous race at Suzuka several drivers complained that a recovery vehicle appeared on the circuit. As one of several changes in response to that incident, race control now advise teams when a recovery vehicle has been sent out, and those messages are relayed to drivers.

The race doesn’t remain green for long, however. Fernando Alonso and Lance Stroll collide, putting the Aston Martin out and scattering debris across the back straight.

The race engineers can see little of the crash scene and can give their drivers little advice on how to avoid the debris on the straight.

Hamilton’s attention briefly moves from the Red Bull ahead of him to the one behind, as Sergio Perez is threatening.

The race restarts once more. Verstappen is asked to change a setting on his engine and is unhappy with the effect it has on power delivery.

As in the earlier laps, Verstappen is only losing time to Hamilton at the points on the track where the Red Bull driver is saving his tyres more.

Charles Leclerc, who has climbed through the field from 12th, made his pit stop under the Safety Car and Red Bull briefly entertain the possibility he may try to reach the end of the race without pitting again.

Mercedes waste no time in bringing Hamilton in for his second pit stop. This time the gamble pays off – a slow front-left tyre change costs Verstappen over eight seconds.

Hamilton is now the effective leader of the race. Mercedes update him on the situation behind.

However Hamilton is concerned that while he’s on hard tyres, Verstappen has taken a set of mediums, which will be faster.

Verstappen catches Leclerc but despite them fighting for position Hamilton can’t pull away from them. The Ferrari driver is only able to hold Verstappen back for a single lap anyway before he passes in a DRS zone.

Lambiase tells his driver not to push his tyres too hard as he begins his pursuit of Hamilton, needing to keep some life in them for later.

Although Verstappen only catches Hamilton gradually, once he gets with DRS range he’s through immediately. However he briefly loses power from his battery.

He is also increasingly at risk over track limits. He collects his third warning, leaving him one away from a penalty, and Hamilton behind him repeatedly calls attention to more possible infringements.

However Hamilton also reaches his third track limits warning. With Leclerc less than five seconds behind, he also has to take care.

Verstappen pulls away to win by 5.023 seconds – enough that he is guaranteed the win even if he is penalised.

While Mercedes commiserate with Hamilton, Verstappen congratulates Red Bull on clinching the constructors championship, a fitting tribute to late team founder Dietrich Mateschitz whose death was announced the previous day.

37 comments on ““He’s gone off again”: Hamilton and Verstappen’s US GP battle on the radio”