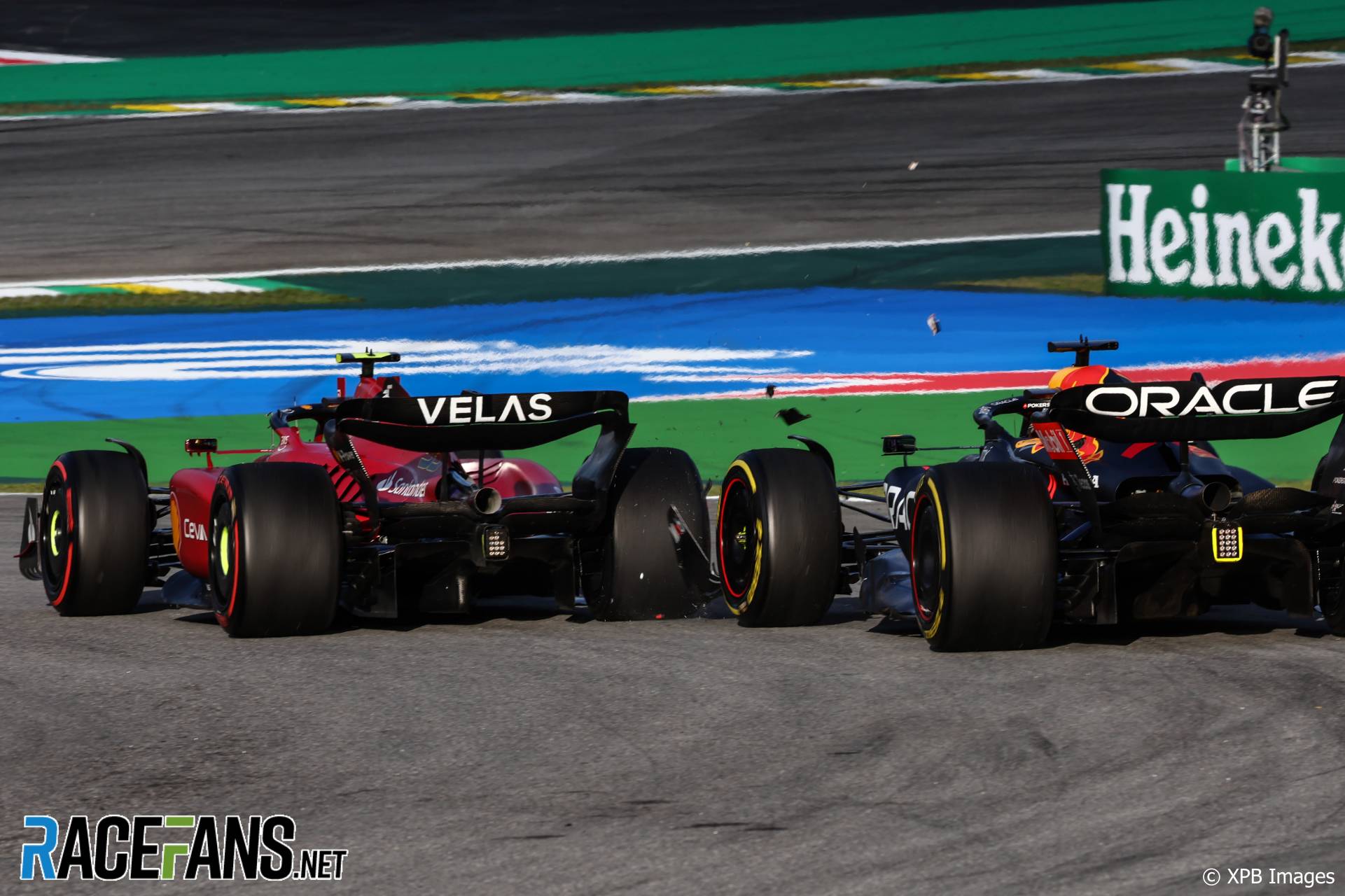 Carlos Sainz Jnr said his move on Max Verstappen which left the Red Bull driver with a damaged front wing was “fair”.

The pair made contact as they pair battled over second place into the Senna S. Verstappen lost his left-hand end plate from his front wing when it made contact with the Ferrari. Sainz admitted it had been a “tight” battle with his rival.

“Whenever you’re about to overtake a Red Bull, you’re going to have to risk it on the braking because, obviously, on the straight, it’s not like you can pull side-by-side,” Sainz explained. “Passing a Red Bull’s probably the toughest thing to do.

“I had to send it a bit under braking obviously, locked up a bit and went a bit long which ended up having a bit of contact with Max, but I think that’s also fair. I think it’s part of racing, in the end there was no main damage to both of us.”

Sainz said the pass “reminded me a bit of the pass I did on Checo here in 2019 where I went very close to the inside wall which was quite tight. But I made it stick, so I’m quite happy about it.”

He rose to second place in the race having started fifth, passing Lando Norris, Kevin Magnussen and then Verstappen on the way to finish four seconds behind winner George Russell and half a second ahead of Lewis Hamilton.

Following a difficult last grand prix in Mexico when both Ferraris were off the pace relative to their rivals, Sainz believes his performance in the sprint race shows that Ferrari will not have the same difficulties on Sunday as they did in Mexico.

“We are more on the pace, but we don’t know about Red Bull because Max had the medium and seemed to struggle,” he said.

“But after today, Mercedes definitely seem have the edge over us, especially in race pace again and Lewis was putting a lot of pressure on me. George was pulling away little by little so still some work to do in the race if we want to beat them, but at least today I managed to do a good race, get myself in the middle of them, split them.”

However Sainz will start from seventh on the grid for Sunday’s grand prix after serving a five-place grid penalty for taking a sixth engine. “Unfortunately tomorrow I need to take the penalty which is costly because it would be a lot better if we could start P2 tomorrow and try something,” he said. “But we will do our best tomorrow to make it back through the field.”

He expects he will be “in the mix” for victory despite the penalty. “I made it past Max which was quite difficult because of his top speed. But I feel like if tomorrow we [would] start P2, we would be vulnerable to the Mercs because they seem to have better degradation, better race pace. But I believe we will be in the mix.”

Sainz is bemused to have to face a grid penalty after a strong result in the sprint race, pointing out this is the latest setback for him this season on occasions when he appeared to have good pace.

“Whenever I’m strong and whenever I’m in the pace, I have a setback that weekend which is a bit the story of the whole season,” he said. “At least I feel confident, I feel comfortable, I feel like I did a perfect race today so I’m up for the fight tomorrow.”

9 comments on “Contact with Verstappen during pass was ‘fair, part of racing’ – Sainz”