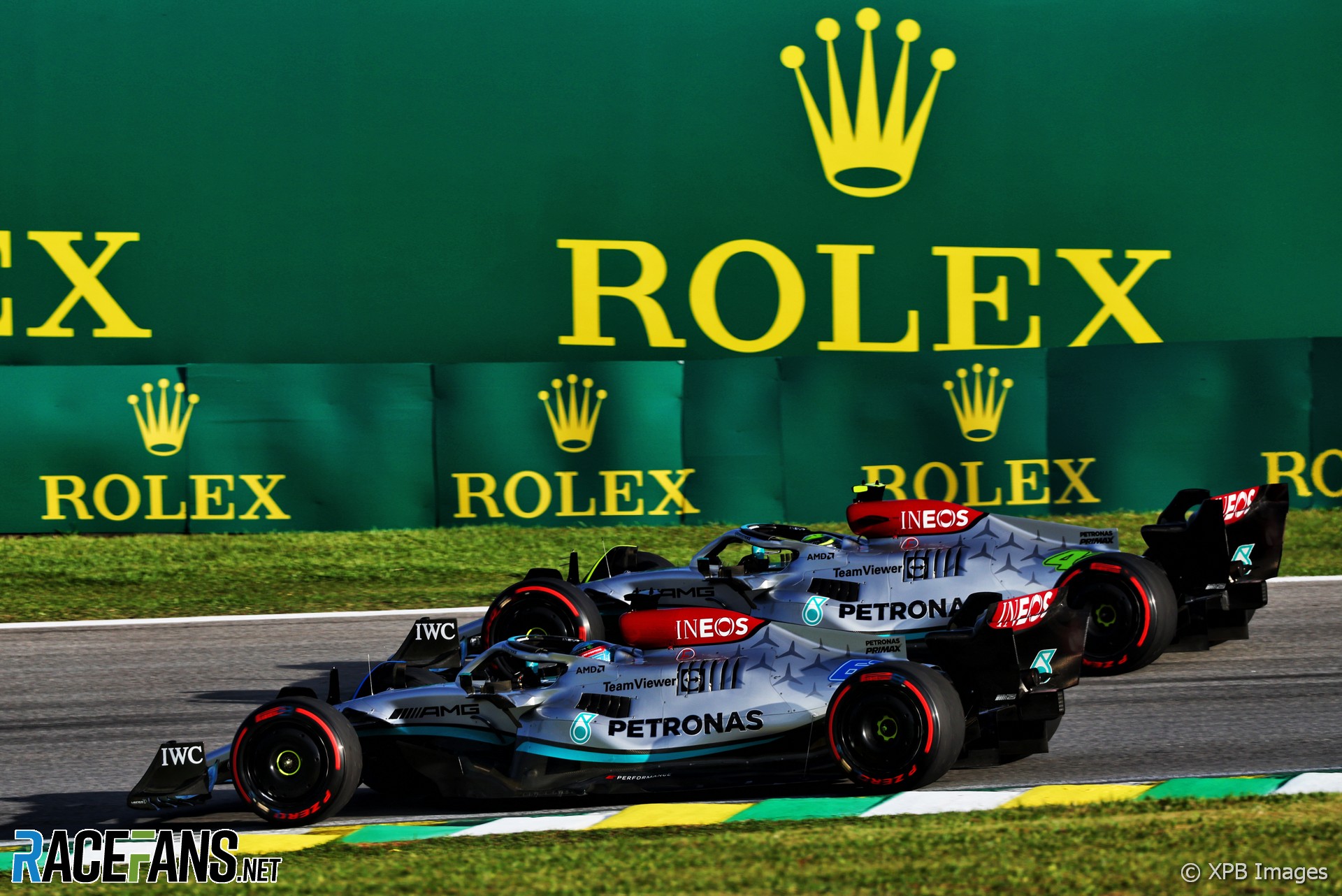 Lewis Hamilton says he and team mate George Russell will have to co-operate to maximise the team’s chances of scoring their first grand prix victory of 2022 today.

Russell will start today’s Brazilian Grand Prix from pole position after winning yesterday’s sprint race. Hamilton, who finished third, will line up alongside him on the front row after Carlos Sainz Jnr’s grid penalty is applied.

It has been a remarkable turnaround for Mercedes, which began the season in poor shape with an uncompetitive car. “This is such an incredible result for us as a team,” said Hamilton. “We’ve all worked so hard through the year.

“Did we think that we would be starting on the front row of the Brazilian Grand Prix at the end of the year? Not at all. But that’s what everyone’s worked towards.

“So I’m just really incredibly proud of everybody and thankful to everybody back at the factory for their continued efforts and for not giving up. Same with all the women and men here who’ve worked so hard, on their feet, travelling, being away. This is a good day. Tomorrow, we’ve got to work hard to try and keep them behind us.”

Hamilton said the pair will “work together as a team” to maximise their chances of staying ahead of the Red Bulls and Ferraris. “This is about the team. We’ve got to get this result for the team. I think it’d be incredibly special. And obviously, we’re chasing the red guys. So it could be good.”

Russell said Mercedes’ triumph was “a pretty big milestone for the whole team” after their uncompetitive start to 2022.

“When we look back at where we were at the very first sprint [race] of the year, I think I finished eighth,” said Russell, who in fact took 11th in that race, three places ahead of team mate Lewis Hamilton. “And here we are going to be lining up one-two tomorrow. I think it’s really exciting.”

The team has only taken pole position once before this season, when Russell did so at the Hungarian Grand Prix. “Obviously, [there] we got pole position via a qualifying session,” he said. “This is the first time we’ve crossed the finish line in first position in a race.”

He believes Mercedes will have truly shown they are back to their best when they win a grand prix. “It obviously is a little bit of a shame that this wasn’t the race tomorrow,” he said. “But nevertheless, as I said, it really goes to show the work we’ve done.”

Having locked out the front row of the grid, Russell said the team needs to take advantage of their strong starting positions to cover off their rivals’ strategies.

“Having Lewis and I one-two on the grid is going to give us some options of the strategy,” he said. “I think we’re going to have to work together to do something different for one of us to try and get the victory for the team.”