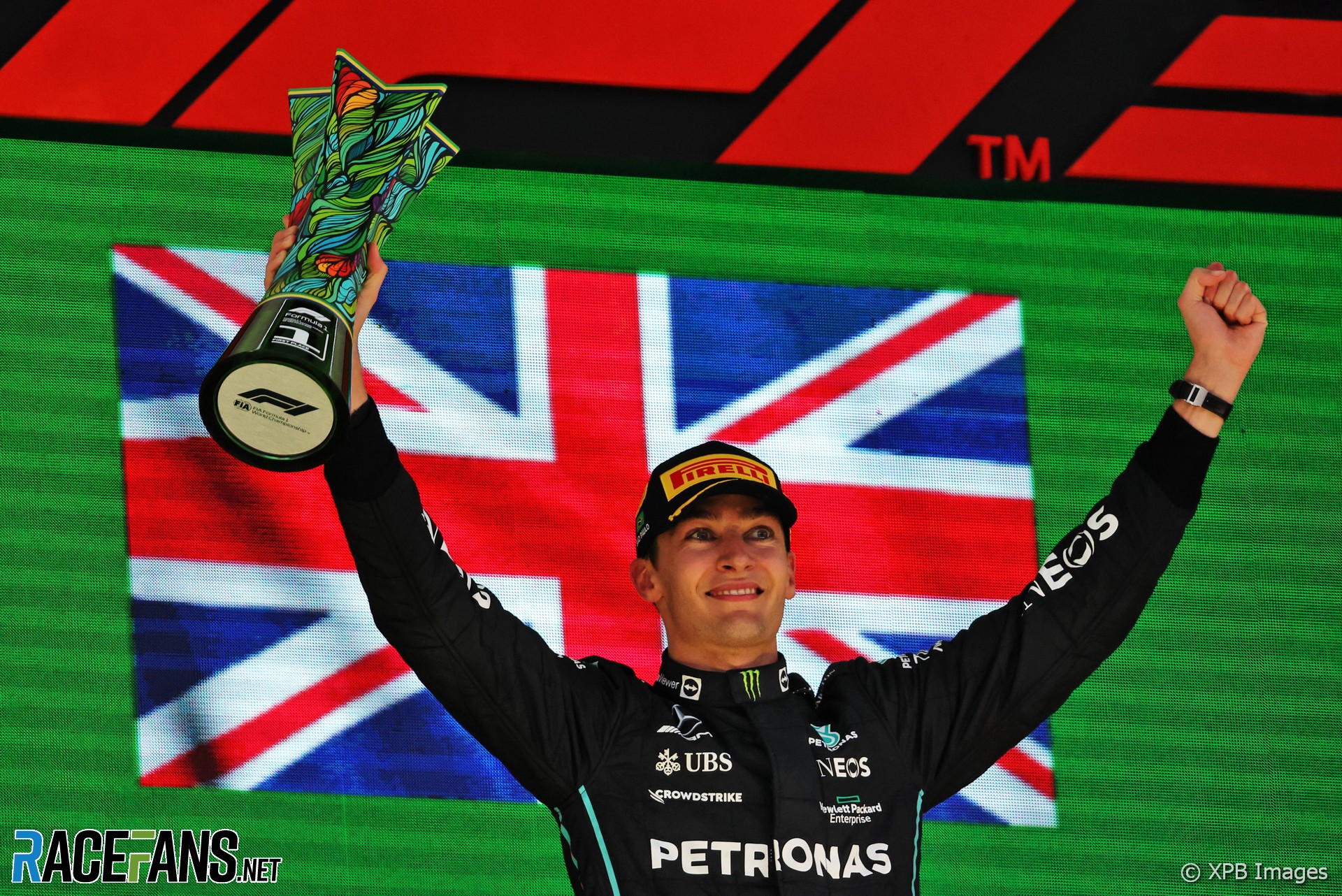 He is the 20th different driver from Great Britain to win a race. There are two other one-time winners on that list, who between them started a total of 80 world championship races, one fewer than Russell. They are 1961 United States Grand Prix winner Innes Ireland, and Peter Gethin who won the astonishingly close Italian Grand Prix at Monza a decade later.

Russell is the latest in a series of drivers to claim their first wins in recent seasons. F1 has had five new race-winners in the last 53 races, stretching back to Pierre Gasly’s win in the 2020 Italian Grand Prix, and including breakthrough victories for Sergio Perez, Esteban Ocon and Carlos Sainz Jnr.

F1 now has a dozen different winners in its 20-strong field. However that won’t be the case after this weekend’s race as two of them are set to hang up their helmets, eight-time winner Daniel Ricciardo and F1’s third most successful driver of all time in terms of victories, Sebastian Vettel, who has 53. The pair were team mates at Red Bull for a single season in 2014.

Russell’s win brought relief for Mercedes, who had gone without a victory this year until then, and avoided their first win-less season since 2011 as a result. Their last victory came at the 2021 Saudi Arabian Grand Prix 21 races earlier. The last time they went this long without a victory was between Nico Rosberg’s triumphs in the 2012 Chinese Grand Prix (Mercedes’ first in its modern incarnation) and at Monaco the following year.

Mercedes’ 11-year race-winning streak is the longest of any team at present. Red Bull are next on seventh. The record is held by Ferrari, who won a race every year for two full decades from 1994 to 2013.

We also had a new pole-winner, though not for the grand prix, where Russell started at the front for the second time in his career. Kevin Magnussen won pole position for the sprint race, which as of this year F1 defines as the pole-winner of the grand prix.

This is problematic terminology, as Russell obviously started the grand prix from pole position. Moreover, it is inconsistent, as drivers who took pole positions for sprint races last year were not regarded the same way. For the purposes of Stats and Facts, the two achievements will be referred to separately: Russell took his second grand prix pole position, Magnussen his first for a sprint race.

Magnussen is the fourth different driver to take pole position for a sprint race, joining Max Verstappen (three), Valtteri Bottas and Hamilton (one each).

Russell added another fastest lap to his recent haul: This was his third in a row and all four he’s had this year have come in the last five races. It’s the fifth fastest lap of his career, putting him level with Giuseppe Farina, Carlos Pace, Jody Scheckter, Didier Pironi, John Watson and Michele Alboreto. Russell therefore also claimed his first hat-trick of pole position (traditional definition), win and fastest lap.

Regular qualifying is back this weekend (three cheers!) and Ferrari have an opportunity to set a new team best. If Sainz or Charles Leclerc claim pole it would be the first time the team has ever started 13 grands prix from pole in a single year.

Fernando Alonso equalled his best finishing position of the year with another fifth place. That has brought him within five points of team mate Esteban Ocon in the championship. Having trailed him in the season all year long, Alonso has a realistic chance of jumping ahead at the final race of the year.

Have you spotted any other interesting stats and facts from the Brazilian Grand Prix? Share them in the comments.