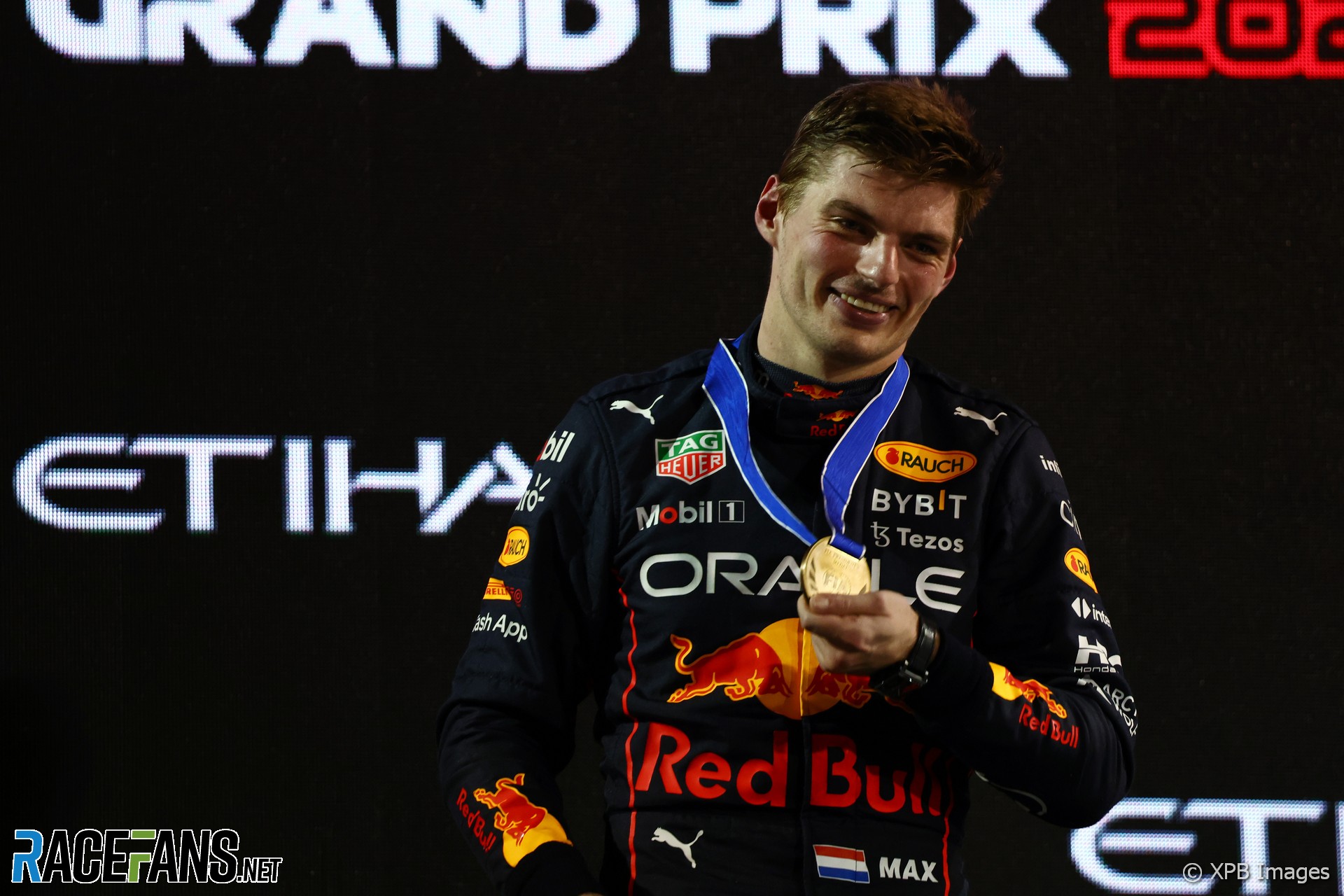 Max Verstappen signed off his dominant 2022 season campaign with his record-breaking 15th win from the 22 grands prix.

Having equalled Vettel’s all-time record for most wins in a season with his 13th victory in the United States Grand Prix last month, Verstappen increased that with two more victories over the remaining races.

Had he swept all three, Verstappen would have beaten Vettel’s achievement of winning 68.4% of the grands prix held. He did take the most dominant title win since Vettel’s 2013 triumph, however.

Both are short of the record set by Alberto Ascari, however, who won six of the eight points-scoring races in 1952, giving him a win rate of 75%. To hit that next year a driver would have to win 18 of the 24 races.

Verstappen took pole position and won the Abu Dhabi Grand Prix for the third year in a row. No driver has previously managed either feat, despite Mercedes taking six poles and wins in a row at this track between 2014 and 2019.

This was 35th win of Verstappen’s career and his 20th pole position. The latter puts him level with Damon Hill and Valtteri Bottas.

Before the final race began Verstappen had already broken the record for most points scored in a single season. His final triumph ensured he smashed the previous record of 413, set by Lewis Hamilton in 2019, increasing it to 454:

*Did not win championship

However Hamilton set the record over a season of 21 grands prix compared to this year’s 22. In breaking this record Verstappen also had the advantage of three sprint races, from which he scored 21 points out of a potential 24.

Charles Leclerc took second place for Ferrari, securing his best-ever finish of second in the points standings. That also denied Red Bull a one-two in the drivers championship, something they have never previously achieved.

Mercedes drivers finished first and second in the championship from 2014-16 and 2019-20. The only non-Mercedes driver to appear in the top two during that period, Sebastian Vettel, retired from F1 after his 299th grand prix start on Sunday.

For the first time in his career, Vettel went a full season without standing on the podium. The final podium appearance of his career, at the Hungaroring last year, was taken away from him after his car was disqualified for a technical infringement. His last true podium finish was therefore his second place in last year’s Azerbaijan Grand Prix.

Second for Leclerc was the ninth appearance on the podium for a Ferrari driver at this race. However the team is yet to score a victory at Yas Marina, which joined the F1 calendar in 2009.

The top five drivers in the championship all achieved or equalled their best finishing positions. Behind champion Verstappen and Leclerc came third-placed Sergio Perez, who went one better than his previous best of fourth, achieved with Racing Point in 2020 and again with Red Bull last year.

Carlos Sainz Jnr repeated his personal best of fifth place from last year. In his first season with Mercedes, George Russell leapt from a previous best of 15th in the points last year to fourth.

It wasn’t a year to remember for Hamilton. For the first time in his Formula 1 career he neither won a race nor started from pole position. He did pick up two fastest laps, at Silverstone and the Hungaroring, lifting his career total to 61, 16 fewer than record-holder Michael Schumacher.

The fastest lap in Sunday’s race was taken by McLaren’s Lando Norris. It was the fifth of his career, giving him as many as Russell, as well as Giuseppe Farina, Carlos Pace, Jody Scheckter, Didier Pironi, John Watson and Michele Alboreto.

Abu Dhabi held the season finale for the 11th time, equalling the record held by Australia, which was the venue of the last race every year from 1985 to 1995. The Yas Marina circuit is also due to hold the last race on the 2023 F1 calendar.

Have you spotted any other interesting stats and facts from the Abu Dhabi Grand Prix? Share them in the comments.